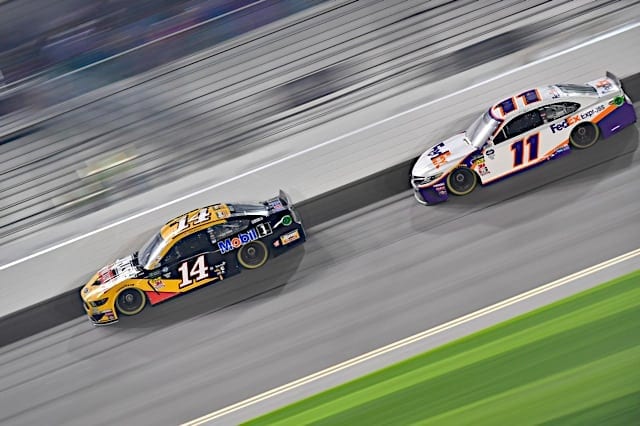 For much of Thursday’s (Feb. 14) second Gander RV Duel at Daytona International Speedway, Clint Bowyer was in prime position to win his first career race during Daytona Speedweeks. But coming to the tri-oval to take the white flag, reigning Monster Energy NASCAR Cup Series champion Joey Logano put a halt to that.

After starting fourth and making a pit stop just shy of lap 15, Bowyer captured the lead when Brendan Gaughan pitted. For the next 41 laps, the No. 14 car sat atop the scoring pylon.

With a consistent lead draft of 10 cars, four of which were Fords, Bowyer paced the field around the top of the track. But when  Logano made the move heading into turn 1, he shot up the inside with help from Team Penske teammate Ryan Blaney. Bowyer saw the duo coming too late… and knew he was in trouble.

“[Logano] was getting those runs and when you’re single file like that in the mirror, you can’t tell how fast they are coming or anything until they pull out,” Bowyer said after finishing second. “Once he pulled out, I was like ‘Oh my God, he’s the fourth-place car.’ He’s not the one that I thought was going to be able to catch the leader, so it just tells you the run they were getting.

“If I would have pulled down and blocked, he would have got to my outside and, we’ve seen time and time again, that’s the last place you want to be is on the outside of you. I tried to stay up high and I didn’t really think he would clear me and he cleared me and went on.”

Despite pacing the field for over two-thirds of the race, Bowyer wasn’t surprised the field ran single file behind him. As a result, the jury’s still out on who has what for Sunday’s (Feb. 17) Daytona 500.

“Unfortunately, I haven’t really learned anything yet,” he stated. “It’s just kind of been one line. It is what it is. I’ve been racing for a long time, been at a lot of different racetracks, lot of different surfaces, dirt and asphalt, and every now and then you get a chain race like that.”

With the second-place result, Bowyer will start fifth in the Great American Race. Meanwhile, his Stewart-Haas Racing teammate Aric Almirola will start just behind him in seventh.

Denny Hamlin and Kurt Busch rounded out the top five in the Duel race.