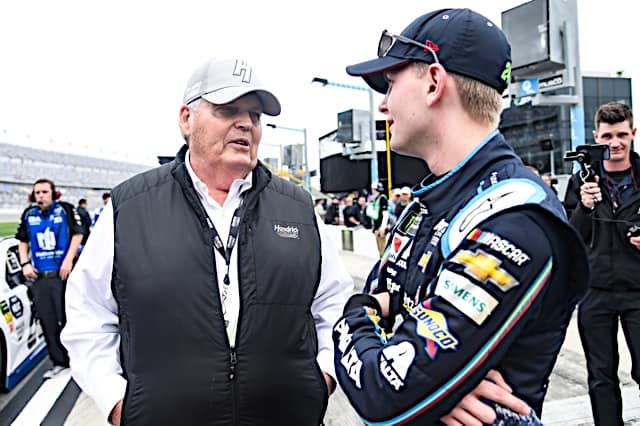 William Byron is in college, but he doesn’t come off as the average college student. That’s because he doesn’t live an average life.

Byron’s schedule is hectic. He attends Liberty University, sometimes in person and other times online. The rest of the week is spent with Hendrick Motorsports, starting with team meetings and press spots and ending the week by going to a racetrack.

But Byron’s start in racing is one that truly makes him unique. Sure, plenty of teenagers grow up playing video games, but how many actually use that knowledge to become a professional athlete?

Byron did just that. Others have tried, like Ty Majeski and Timmy Hill, but have not succeeded in becoming a NASCAR champion. They made their way up to NASCAR, but haven’t won a race, let alone a championship.

Byron has done both, thanks to both natural talent and plenty of money.

It’s the new standard, thanks to Byron. If teenagers want to pursue a career in racing after having success playing a video game, that’s fine and dandy. But expectations will increase as time goes on, and Byron’s standard is setting the bar even higher, most recently evidenced by his pole at the Daytona 500.

Byron’s pole is stunning in the sense that he didn’t grow up racing actual cars. He used simulators. He created a work ethic and mapped out a strategy that would lead him to the top of NASCAR.

Now, he’s working for Hendrick, driving the No. 24 car made famous by four-time champion and Hall of Famer Jeff Gordon. The pressure is on.

But for Byron, it’s a win even if he doesn’t take home the trophy on Sunday. He made it to the top. Byron can literally never win at NASCAR’s top level, and I’d still consider it a success story.

Why? He defied the odds. He took the knowledge of determining premier race setups, the ideal line to race on and other key information from iRacing and applied it to real-life racing.

Byron is not just your spoiled kid who has money. Sure, his father’s relationship with Liberty University helped secure top rides. But his statistics speak for themselves. He outran everyone in the Xfinity Series, earning a championship in his rookie year for JR Motorsports, just like teammate Chase Elliott. A year prior, he earned seven wins in the Gander Outdoors Truck Series as a rookie, the most ever recorded.

Other drivers have been in the same exact equipment that he’s raced in. None have excelled like Byron.

When teenagers are going from the simulator to a real racecar, things get very real quite rapidly. Suddenly, you’re immersed in a small space, rather than a bedroom. It’s not for everyone.

Byron stands out because of his work ethic. His determination to succeed and analytical approach led him to this point.

Now, he takes the green flag on Sunday for his second Daytona 500 with no one in front of him. The open racetrack is for him tame if he plays his cards right.

To have reached this point is certainly a milestone. It’s one that should be praised.

eNASCAR might lead to more success stories. But Byron will always stand out. If he continues to excel, the bar will rise. If not, it will be left unbroken, waiting for the next kid to have his shot at winning a Monster Energy NASCAR Cup Series race.

There were others before Byron. But now, they can look at him and say they too can succeed.