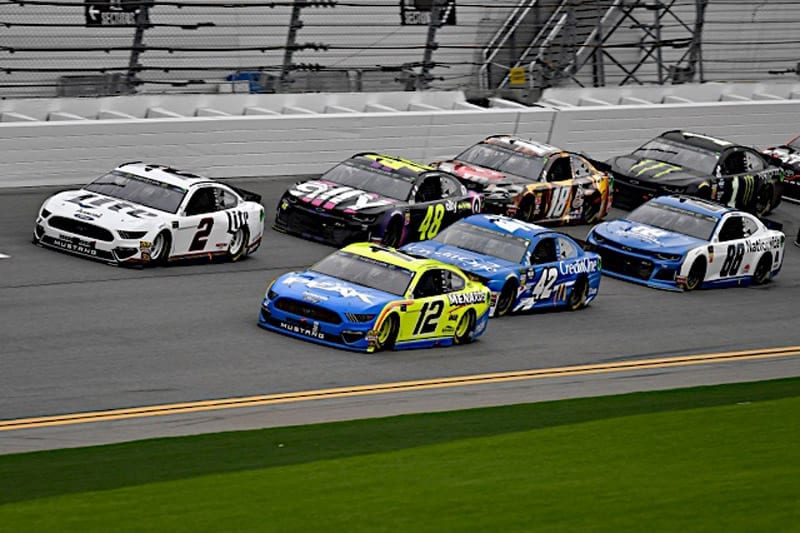 The Advance Auto Parts Clash has taken some criticism over how difficult it was for drivers to pull out of line and make a pass. How do you see this playing out over the remaining Speedweeks events? Isolated issue or recurring problem?

Clayton Caldwell: It’s an issue we’ll see throughout Speedweeks. This package has been an issue for a while now; the bottom lane just doesn’t come in. Drivers were taking it easy for the Clash until the end of the race, but still we saw a lot of restarts in that race and drivers just could not move.

Alex Timms: We’ve seen this problem occur in recent years. One car pulls out of line abruptly causing the car in front to spin out. While Jimmie Johnson could’ve gave Paul Menard more room, that’s not the last accident at that nature we will see. And based on his track record, the No. 48 might just be at the center of it again.

Zach Gillispie: It will certainly not be isolated. We saw the same kind of racing last year, and the year before. Daytona International Speedway and Talladega Superspeedway are meant for three-wide, side-by-side racing. Right now, the aero package is really making it difficult for the competitors to do that. Fans shouldn’t have to see the drivers play follow the leader for 80 percent of the race. This aero package needs to be fixed to get back to the side-by-side racing to which restrictor plate tracks are accustomed.

Matt McLaughlin: I’ll go out on a limb and predict a sedate Daytona 500. It’s shaping up just like the 2000 Daytona 500 won by Dale Jarrett leading another quartet of Fords. I look for the Ford or Toyota teammates (or perhaps the Hendrick Motorsports crew) to get in line and ride contentedly in a single-file line on the outside until the last three or four laps. The Fords are the usual suspects as the new Mustang seems to work better in a line than trying to break away. The 2000 500 was thought to be a borefest, and NASCAR, bless their pointed little heads, decided to throw in some rules changes for 2001 like the taxi cab strips on the roof. On the plus side, it made for better racing, Downside: they killed Dale Earnhardt. The bastards. Sedate is fine, It beats fatal.

Nick Tylwalk: It’s always a little hard to say what lessons to learn from the Clash because of the smaller field, differing agendas and the possibility that someone is just waiting until it’s just about to rain to wreck someone to win. Just kidding, Jimmie Johnson fans! It wasn’t disturbing that the cars got single file as much as how fast it happened. I’m hoping it was just a one-off situation but am worried it will be like that on Sunday.

The Daytona 500 has been the season-opening event for nearly 40 years. With a schedule shake up likely on the horizon, should it be moved to a different point in the season?

Tylwalk: If NASCAR really wants the Daytona 500 to live up to its rep as the king of all stock car races, it should really be the last race of the season, but we all know that would be no way to crown a champion, particularly in the playoff era. Throwing it arbitrarily in the middle of the schedule would be even worse, so let’s just leave it as is.

Vito Pugliese: The Daytona 500 as the first race of the year makes perfect sense. Speedweeks is a two-week event and should remain as such. What shouldn’t follow it is another race a week later with a terrible date that can be impacted by weather. Take a week off after the 500, let the winner take the victory lap doing media for the following week, and then meander out West to start the West Coast swing. Nothing stymies momentum and fosters negative talk like weather delays, empty seats and sour fan reaction.

McLaughlin: Nah, leave it where it is. It’s a shadow of its former, pre-plate-tapered spacer self, but the Daytona 500 remains the biggest race of the season, and it’s like a wakeup call to casual and non-fans that a new Cup season is starting. It’s best to let them know before March Madness kicks off.

Timms: I’m all for a major overhaul of the schedule , but the one thing that’s been working for the past half century is the Daytona 500. It hypes up the season for everybody; it’s what makes NASCAR unique, having its biggest race first. The importance of winning the Daytona 500 would be tarnished if moved to any other weekend.

Of the four drivers that won at Talladega and Daytona last year, only one went to Victory Lane in any other event. Do you see another unexpected winner for the 500, or will the cream rise to the top on Sunday?

Caldwell: The Daytona 500 favorite right now is Brad Keselowski. He may be the the best plate racer of all time not named Dale Earnhardt. He’s gotta get a 500 eventually.

Gillispie: If the Clash was any indication, we might. There could be several big crashes that eliminate a lot of competitive cars. The aero package might have something to do with it. Don’t be surprised if guys like Michael McDowell, David Ragan and even Casey Mears are battling among the big guns at the end.

McLaughlin: As usual look for three or four surprises in the top 10 due to the musical chairs nature of the plates and track. But I expect a non-surprise winner. My money is on Brad Keselowski if he doesn’t wreck himself out trying to stay ahead of Joey Logano.

Mark Howell: The cream will rise, but the winner will be a first-timer who’s been showing promise. Look for Chase Elliott, Ryan Blaney (my pick) or Kyle Larson to hoist the trophy.

Pugliese: Barring any last lap wrecking, it will be a driver from one of the top Ford teams, although it might be one you haven’t heard from in a while. With 50/1 odds, a great wager is putting some cash down on Ryan Newman. The following races might be a bit of a drag for the Roush Fenway Racing cars, but Newman has a 500 win on his resume, and Doug Yates engines are hard to handle at plate tracks, plus they have dominated the Daytona 500 over the last 10 years.

A handful of drivers switched teams during the offseason this year. Who do you think will see the biggest improvement from their new home? Vice versa?

Tylwalk: NASCAR isn’t a sport where you can get better results just by sheer willpower, but you have to think Daniel Suarez will be racing with a chip on his shoulder this season. The new Mustang and rules packages are definitely big question marks, yet if it’s possible to upgrade by leaving Joe Gibbs Racing, Suarez did it by landing at Stewart-Haas. He’ll be strong immediately and have a better chance than ever of picking up his first Cup Series win. On the other hand, though I might look silly for this pick, Kurt Busch may find the adjustment to Chip Ganassi Racing trickier than he expects and mot really find his groove until half the campaign or more is through.

Pugliese: Most improved driver? Suarez. Many are picking him to struggle, but he’s going to be a pleasant surprise, not unlike Aric Almirola last year in the No. 10 SHR Fords. As far the struggle bus, it will be interesting to see how Martin Truex Jr. joining Joe Gibbs Racing pans out. After beating the team with its own stuff for the last couple of years, one has to wonder where JGR falls in the pecking order now within the Toyota camp.

Howell: Newman at Roush Fenway. That combination might put RFR back into regular contention again. A driver who may struggle in Kurt Busch. Chip Ganassi likes to call the shots, as does Busch; these two may butt heads early and often.

Timms: Of all the changes for 2019, I see Matt DiBenedetto and Leavine Family Racing having the biggest improvement from a year ago. Now back with Toyota, DiBenedetto is poised for his best year yet, from his walk to his smile. A win? Maybe not this year, but a surplus of honorable mentions would be a significant improvement. On the contrary, Suarez is primed for a lackluster 2019. You can say lack of preparation or distraction from switching teams, but either way this year is going to be a struggle out of the gate for Suarez and the No. 41.

Caldwell: I hope I am wrong, but the driver to struggle the most is Newman. That team will be improved, but it may take five to 10 races for the impact of Newman and Scott Graves to change things over there. Kurt Busch will really help Chip Ganassi Racing. He’ll be a good teammate for Kyle Larson to lean on and give pointers to on how to reach the next level of the drivers.