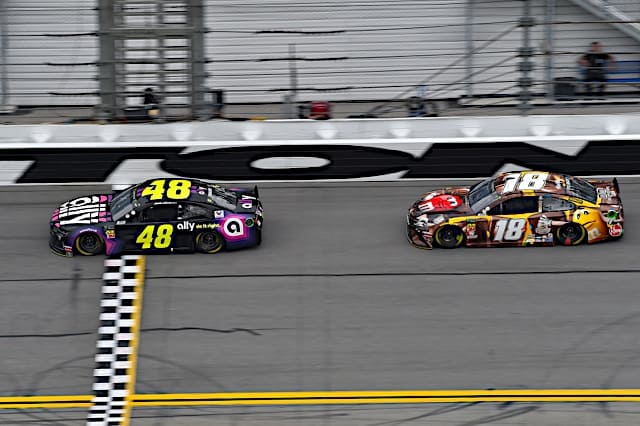 For the second time during 2019 Daytona Speedweeks, Jimmie Johnson was the center of attention. This time, it was Kyle Busch on the wrong end of contact on the racetrack.

On lap 27 in Thursday’s (Feb. 14) Gander Outdoors RV Duel, Johnson and Busch were side-by-side in the lead draft when catching lapped car Tyler Reddick. Coming off Turn 2, the No. 48 slid up into the No. 18, spinning Busch down the backstretch. The M&M’s Toyota suffered damage to the hood, scrunching some sheet metal while losing both hood flaps.

Johnson went on to finish eighth, while Busch was one lap down in 18th after the right front was dragging on the ground.

With help from Jimmie Johnson, "Rowdy" goes for a slide. #GanderRVDuel pic.twitter.com/t9xuu7rM6u

“I’m looking out the windshield, the rear-view mirror and my third mirror, trying to judge if the line is going to follow me, if the line is going to follow Kyle and where the third car is. In that whole environment, I wanted to get back behind Kyle and I think my eyes were in the wrong spot so I didn’t have a good sense of perception of where I was with Kyle trying to manage my mirrors. I thought I knew where I was with my right front and I just got it wrong.”

However, Busch saw the incident a bit differently.

“I have no idea. I was in the middle of three-wide and got hit in the left rear,” he stated. “…You have to open your eyeballs and see where the f**k you’re going, that’s about all I can say.”

Busch says he doesn’t believe his team will have to roll out the backup car, though he could do nothing with it for the remainder of the Duel.

“The [expletive] is destroyed. It vibrated the rest of the race. It was a turd, I couldn’t even keep up with the slow cars. [But] it doesn’t need to be a backup,” he added. “We just have to figure out if we need to put a hood on it to pick the pace up on it.”

In Sunday’s Clash (Feb. 10), Johnson got into Paul Menard on what turned out to be the final green-flag lap. The No. 48 won the race but triggered a 17-car pileup in the process.

Despite making contact in both cases, Johnson sees them differently.

“I firmly believe the Clash was a racing incident,” he said. “This one was a mistake on my behalf and everyone makes mistakes.”

Johnson admitted he will reach out to Busch to apologize one-on-one.

Don’t worry Kyle, it will be a follow the leader race. Nice car nascar.

Yep I agree.I think it’s going to be a waste of time watching on Sunday although I’ll give it a try. Guess we could have another snoozer like the Super Bowl was.

Crash Johnson does it again. I expect no less from him in the Sunday race. How many he will take out is to be determined.