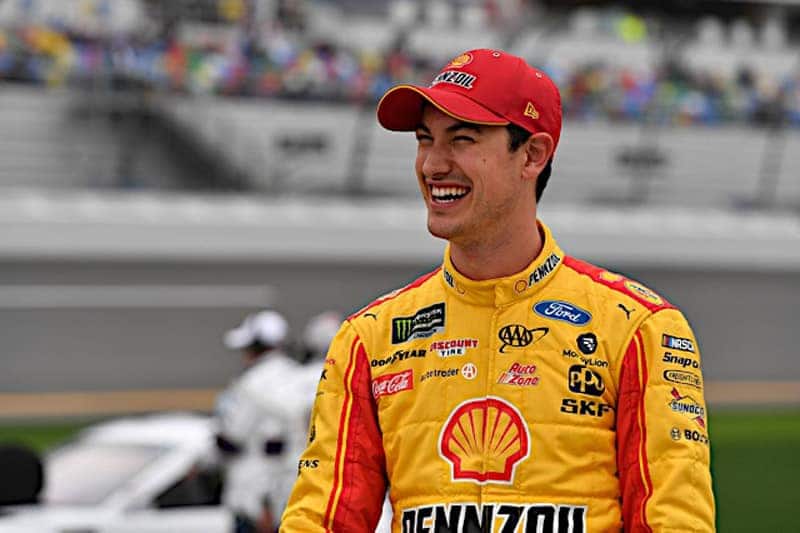 Joey Logano bided his time during the second 2019 Gander RV Duel at Daytona International Speedway. He led just one lap, timing his move to the front for the last possible second.

Logano sidedrafted past Clint Bowyer, completing a remarkable run from fourth to first as he earned the win in the second Daytona qualifying race. Logano’s victory meant a Ford Mustang sweep on Monster Energy NASCAR Cup Series Victory Lane Thursday evening (Feb. 14). They’ll start third and fourth in the Daytona 500 after the Chevrolets of William Byron and Jimmie Johnson swept the front row during pole qualifying.

“Cool to see a couple of Mustangs in Victory Lane already,” Logano said. “You have the whole race to think about a move. Just waiting, waiting, waiting. There’s a whole lot of anxiousness behind me, people just really want to go. But the later you do it, the less you risk.

“I was able to sidedraft the No. 10, pull him back, just barely got enough to break that plane and get in front of the No. 14.”

Bowyer couldn’t see Logano coming until it was too late. The veteran wasn’t able to regroup in time to make a counterattack and had to settle for second.

“At the end of the day, when you’re leading that train like that, you can’t see the runs coming behind you,” he said. “I can’t tell until [Logano] pulls out how fast they’re coming behind you. By the time he got to me…. It is what it is. The car is still in one piece. The Mustangs are fast. That’s two in both Duels.

“If the money is on the line for the Daytona 500, yeah I pull down and block him and do whatever. But yeah, he had a massive run… wasn’t anybody’s fault.”

Aric Almirola ran third in what became a 1-2-3 finish for the Mustangs in both Duels. Denny Hamlin and Kurt Busch rounded out the top-five finishers.

It was an uneventful Duel that ran caution free; just nine of the 21 drivers finished in the lead draft. Only 12 wound up on the lead lap as several drivers lost the draft early and never recovered. All three drivers trying to race into the Daytona 500 were among them but Brendan Gaughan emerged as the best of the trio, coming home 15th to earn the spot.

Gaughan’s run eliminated Joey Gase (20th in this race) and Ryan Truex from the first Duel. Those two failed to qualify for this year’s Daytona 500 as Casey Mears (17th in this race) took the final spot on speed.

“This absolutely sucks and I’m too old to feel these butterflies!” Gaughan said. “We got in, I had to do it the hard way, but I’d much rather do it the easy way. It’s much more simple.

“I’m just an old retired guy that the Beards [No. 62 car owners] brought out of retirement because I still can get it done at the restrictor plate [tracks]. And they give me equipment that can get it done. That’s why I do it. We can win this race on Sunday now that we are in the race.”

Jamie McMurray ran seventh in the final Duel of his MENCS career. Former teammate Kyle Larson was 12th after a mistake cost him speed and knocked him out of the lead draft.