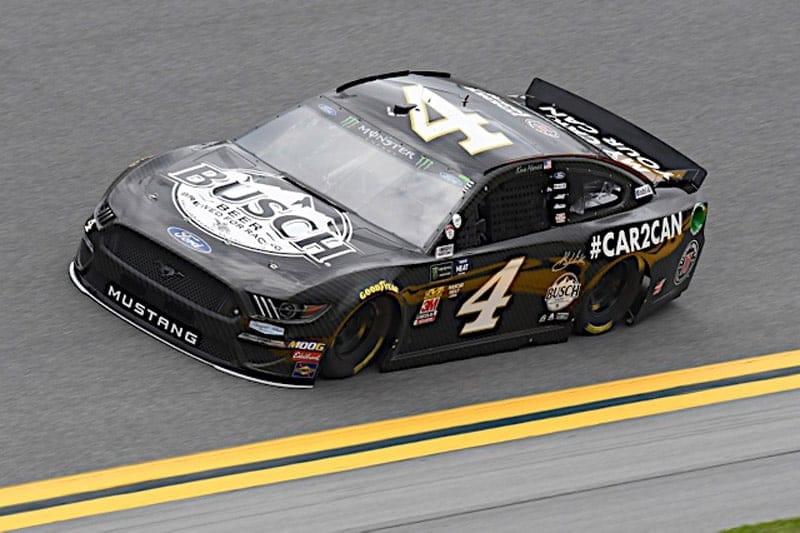 Kevin Harvick won the first of two NASCAR Gander RV Duels at Daytona International Speedway, earning the third starting spot for the 2019 Daytona 500. The first of two qualifying races on Valentine’s Day saw a lot of love shared between manufacturers.  Harvick led a trio of Fords to the line in a race defined by teamwork down the stretch.

Harvick took the lead after the first and only round of pit stops prior to the race’s only caution flag. Once the race went green, he led the rest of the way and steered clear of competition when Ricky Stenhouse Jr. and Paul Menard got side by side on the final lap.

“I knew our Busch Beer Ford was fast, and I had Stenhouse and the 21 behind us,” he said. “I knew we all wanted a Ford to get to Victory Lane. I’m just glad we came out on the right side of it and everything’s not tore up.”

Stenhouse finished second by inches in a photo finish over Menard. It’s the best run for him at a restrictor plate track since winning the first two races of his Monster Energy NASCAR Cup Series career in 2017.

“Our Fastenal Ford Mustang was awesome,” he said. “You saw us run 1-2-3 there. I spent the last 25 laps trying to time it right to where i could get a run on Kevin. I just couldn’t seem to time it. We wanted to be in Victory Lane but we learned a lot.”

“I wouldn’t be able to sleep tonight if I didn’t try something,” added Menard. “Everybody’s trying to save their [Daytona] 500 cars, I was too once I knew I wasn’t going to get by Ricky.”

It was the first win for the modern Mustang in NASCAR Cup competition. Ford switched from the Fusion after a 2018 season in which they won both the driver and manufacturer’s championship.

Further back, Parker Kligerman pulled an upset by pushing past Tyler Reddick in the closing laps to make the Daytona 500. Kligerman got an assist from Kyle Busch‘s fellow Toyota as they blew by Reddick’s Chevrolet.

That put Ryan Truex in position to potentially miss the Daytona 500 depending on the result of the second Duel.

“All three of us were on our own with no help. I knew the [No.] 18, when he got back there, he was going to push the Toyota,” Truex said. “I tried to drag it back, but we had a windshield brace break so my car was super drag-y. Once the [No.] 18 cleared me and got to the [No.] 96, there was not really much I could do to try to help the [No.] 31. When you’re three cars riding around like that, you can’t create a pass.

“I’ve missed one before so I know how it feels. I have a lot more opportunities this year to prove I can go out and win races. This sucks, but we’ll move on from it.”

Truex’s despair was matched by Kligerman’s jubilation. The full-time NBC broadcaster has a spot in the Great American Race.

“I never thought I’d get a chance to be in this race again,” Kligerman said afterward. “It means the world to me. To race in is so cool. The days leading up to this are literally some of the worst days of your life and then, in a split second, the whole world becomes clearer and everything is better.”

Asked @pkligerman about his future schedule with Gaunt Brothers Racing. Looking at 12 races, including the first three in a row.

"Quality over quantity" "Being methodical about it, being smart. It's nice to have new owners in the sport."#NASCAR #Daytona500

Busch, meanwhile, was around to help after a mid-race wreck with Jimmie Johnson damaged his No. 18 Toyota. Johnson got into Busch on the backstretch to trigger his second wreck in as many Daytona races.

“I just got it wrong, clearly, we were three-wide and I just misjudged that situation and unfortunately just turned them around,” Johnson said. “Sincere apologies to him and his team. I just got it wrong there.”

Busch wasn’t initially in a mood to accept the apology.

Kyle Busch after the Duel talking about Jimmie Johnson:

"You have to open your eyeballs and see where the fuck your going, that's about all I can say. The fucker is destroyed."#NASCAR

Cars struggled to run on the inside line, leaving the first Duel single-file much of the night. But the final few laps brought encouraging results as drivers went three-wide in the final moments to fight for position.

Several drivers suffered through pit road penalties. Brad Keselowski earned a lap penalty for pitting outside the box during a green-flag stop while rookie Matt Tifft was nailed for speeding twice.