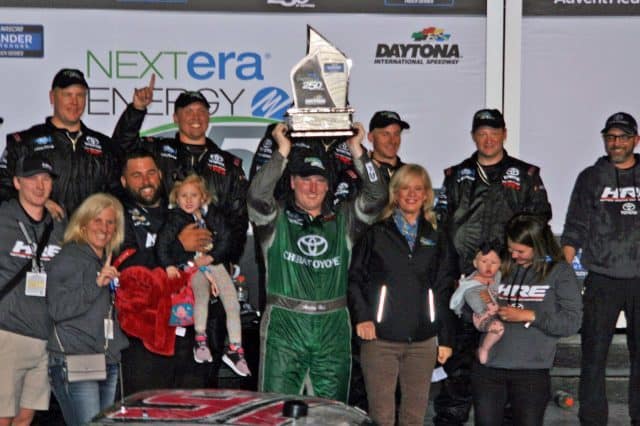 The reigning Gander Outdoor Truck Series champions won their first race of 2019 with a new driver, Austin Hill, behind the wheel. Hill won the first race of his GOTS career, prevailing in a wild NextEra Energy Resources 250 at Daytona International Speedway.

Just nine out of 32 starters finished the race, a NASCAR record for the trucks at Daytona. Overtime was used not once but twice, part of a series of wrecks that marred the final 60-lap stage.

But Hill stayed up front for most of it, watching his top rivals wreck behind (and sometimes in front) of him. Then he had to endure one final run from Thorsport Racing’s Grant Enfinger and concerns about fuel to make it to the checkered flag first.

In all, the race went 11 extra laps, stretching the tanks for Hill, Enfinger and Matt Crafton. A record-setting 11 caution flags led to plenty of anxious moments down the stretch.

“I didn’t have any confidence,” Hill admitted about his gas mileage. “Man, we pitted really early and we knew it was going to be close. When we went to overtime, I was so scared. I just knew I was going to run out coming out of [Turn] 4 coming to the line, but hey, we’re here in Victory Lane.”

Enfinger and Crafton did their best to team up. But Hill make the right moves to stay out front.

“The No. 16 threw some big-time blocks,” Enfinger said. “He threw some major blocks that had to get Crafton checked up. If I got him again, he would have wrecked us.”

That first block split up the two Thorsport trucks and had Crafton sliding back to fifth. Enfinger was left to settle for second, still an impressive comeback after nursing a damaged truck that was once two laps down from an earlier wreck.

Hill was left in the clear, leading a race-high 39 laps en route to victory. He had one top-five finish and 29 career laps led in the GOTS (51 starts) before this win.

“I knew we had a truck that could compete,” he said. “Got a little scarce there at the end. I thought that the [No.] 98 was going to get me. We had a big run but we were able to protect it. I can’t believe my first win came at Daytona. It’s so surreal and I can’t wait to party with these guys.”

Behind them, Ross Chastain came in third to earn the first-ever top-five finish for Niece Motorsports.

“Truck held up and had plenty of speed at the end,” Chastain said. “I just wanted to give Grant a shot, I didn’t think I had a shot from third. The move didn’t quite work out.

“Shige Hattori, he’s my hero. I drove the first truck race for him and that team. To see where they were then and now… they won the championship and then this race. I can’t wait to give him a big hug.”

“I’m just usually terrible at these places,” Crafton said. “I just have the worst luck. But all in all, we were there at the end of the day and earned some points.”

Josh Reaume wound up sixth after needing to buy owners points of another truck in the offseason just to make the field. Timothy Peters was seventh, Austin Wayne Self ninth, and Stewart Friesen claimed 10th despite ending the race inside the garage.

And then there was Angela Ruch. She ran eighth for the best finish of a NASCAR career where she hadn’t even run on the lead lapin 15 previous starts in Xfinity and Trucks. She fought through an inability to save fuel and a faulty piston, defying the odds to earn the second-best finish for a NASCAR woman at Daytona.

Wrecks wiped out several of the top contenders, including pole sitter Christian Eckes, Sheldon Creed, Brett Moffitt, Johnny Sauter and Harrison Burton. Those incidents obscured an earlier penalty NASCAR gave Creed and Moffitt for locking bumpers before the end of the second stage. In the end, Moffitt blamed that call for leaving him back in the pack and in the midst of traffic when an 11-truck wreck on lap 55 decimated the field.

The incident was caused by Jordan Anderson getting out of line, then out of shape entering turns 3 and 4. He was treated and released at the infield care center after getting the wind knocked out of him.

I hope a lot of people watched the truck race, it was quite entertaining. Probably about 100 times more exciting than the 40 car top lane parade that will take place on Sunday.