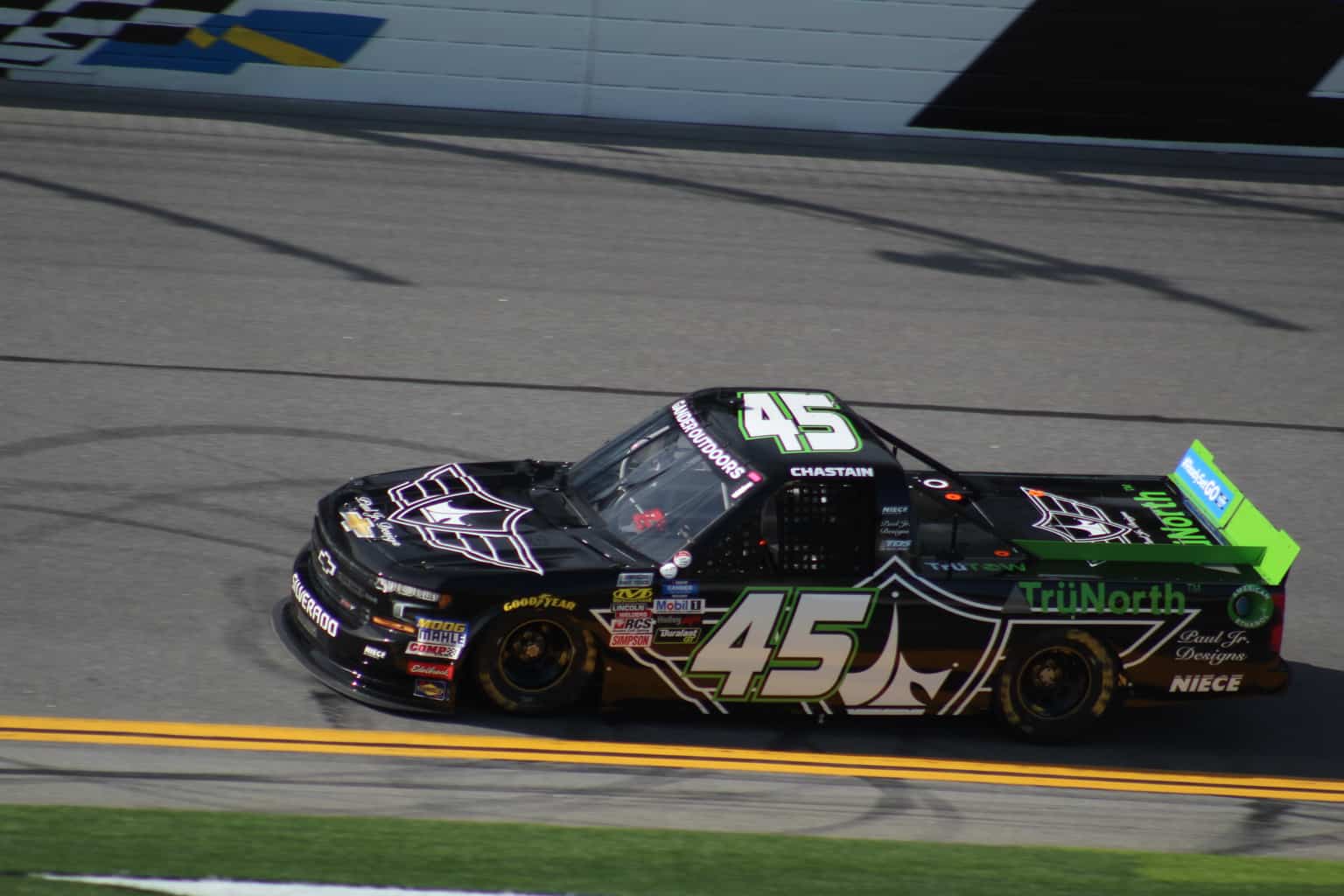 Surviving the carnage that was the NextEra Energy Resources 250 at Daytona International Speedway were Ross Chastain and Timothy Peters, both drivers of Niece Motorsports trucks.

Chastain wheeled his No. 45 truck to a third-place finish, while Peters scored an eighth-place result despite being involved in a wreck with five laps remaining.

“I feel like we could’ve done better than that,” Peters said post-race. “Inside eight to go, when the No. 68 (Clay Greenfield) made his move too soon, he left a lot of room there, and you gotta go and feel the gap there. He came across the front of the truck, and with the experience that he has and knowing his deal, I probably should’ve backed off a little bit, so I’ll take the blame for that.

“But all in all, these Niece guys did a great job on this No. 44 Friends of Jaclyn Chevrolet Silverado. Thanks to Al (Niece, team owner) for giving me a shot. At the end of the day, it’s a solid night with a little bit of a torn-up truck. We’ll build on this and go to Atlanta [Motor Speedway].”

The incident Chastain referred to occurred on lap 95 on the backstretch, sending both spinning.

Peters had no doubt the reason for not being able to draft into the lead with Chastain was due to the damage caused from the wreck.

“It put it on the splitter really hard,” he said. “Just kicking myself. I should’ve known better.”

Chastain tied his career-best finish of third (Bristol Motor Speedway 2012) in the Gander Outdoors Truck Series. He pointed to survival of the fittest as the biggest factor for his top-five run.

“We just played it safe,” Chastain said. “Didn’t qualify where we wanted to; those were the cards we were dealt. That one wreck when we went through the grass, my fault. I spun out. Other than that, just survival, man. Truck racing at Daytona, unfortunately.”

Chastain was content with his podium result, posing for photos with sponsors and grinning ear to ear on pit road. On the final lap, pushing eventual second-place finisher Grant Enfinger to the bumper of winner Austin Hill was his course of action, hoping he could somehow slide through to pass the two.

“I didn’t have any help behind me so I just wanted to push Grant (Enfinger), give him a shot to get side-by-side and maybe take each other out,” Chastain said. “I got Grant to (Hill), and I don’t know, he didn’t make a quick enough move getting into (Turn) 3.

“Austin did an incredible job. Shigeaki Hattori is my hero. That team he’s built, that truck was so fast. It was pulling the whole line. All in all, a good night for the Niece group, though.”

After one of the most heartbreaking offseasons in recent memory, Chastain is just happy to have a ride and enjoying himself racing. He attempted to encapsulate the feeling.

“(It’s) just rewarding, man,” he said. “They let me drive this thing, they want me to, and I want to drive it for him. They give me the shot so I want to repay him and somehow we got through it.”

For Peters, the future beyond the next three races is unknown, but he’s hoping a top-10 finish at the World Center of Racing will aid his efforts.