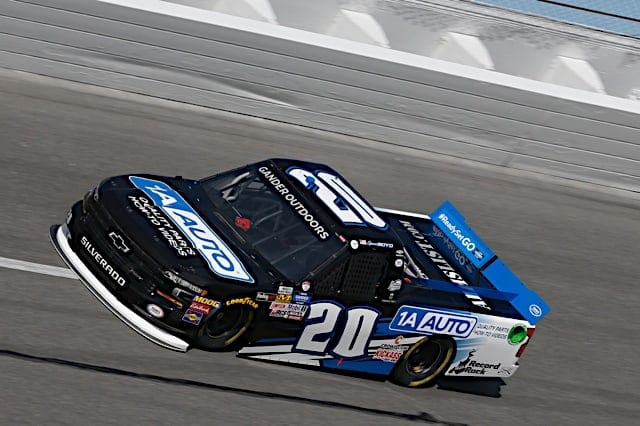 Spencer Boyd bet on himself following the 2018 season by moving down to the Gander Outdoors Truck Series. That bet paid off in Friday’s (Feb. 15) NextEra Energy 250 at Daytona International Speedway.

Earlier in the day, Boyd qualified the No. 20 truck in 14th, a career-best in his seventh Truck start. But once the green flag flew, the Young’s Motorsports Chevrolet showed speed in the draft.

Despite fading to 18th in the opening stage, Boyd finished fifth in the second stage, earning six points. In the final stage, all hell broke loose, and though he got caught up in a late-race crash, Boyd took the checkered flag in fourth, also a career best.

“Going from the Xfinity Series back to the Truck Series with Young’s Motorsports and just trying to get a solid run and try to prove to everyone that I’ve got what it takes to be at this level,” Boyd said. “This is something you dream of forever. You just always ask for that shot. Put me in a good truck, give me the opportunity to be up front.”

With only nine trucks finishing the race, five of which were in the lead draft, Boyd had a real shot at the victory. But the damage from the incident hindered his shot at a checkered flag.

“Once we got out to second, I knew that it was like a parachute and it was going to be tough,” Boyd said. “I needed to be tucked up behind someone. I was behind Matt Crafton all night, took a lot of notes. Just to get a top five in the first race of the year, being new to the Trucks and Young’s Motorsports, is just a dream come true for me.”

Boyd earned the finish with spotter Freddie Kraft (who also spots for Bubba Wallace in the Cup Series), someone he just met this week.

Boyd said: “For a lot of people that have followed my career, [they] know that I’ve driven a lot of stuff that hasn’t been way up front and haven’t been in situations where restarts matter, pitting under green or getting on to pit road on the lead lap. There were a lot of new things for me being a part of Young’s Motorsports and having such better stuff and having an opportunity to win. … To being able to unload and have good speed gives me a lot of faith about the rest of the season and makes me feel good about my decision.”

In 2018, Boyd ran the full Xfinity season with SS-Green Light Racing. His best outing was 17th. Prior to Friday night, his best NASCAR finish was at Talladega Superspeedway in October 2017 driving for Copp Motorsports.