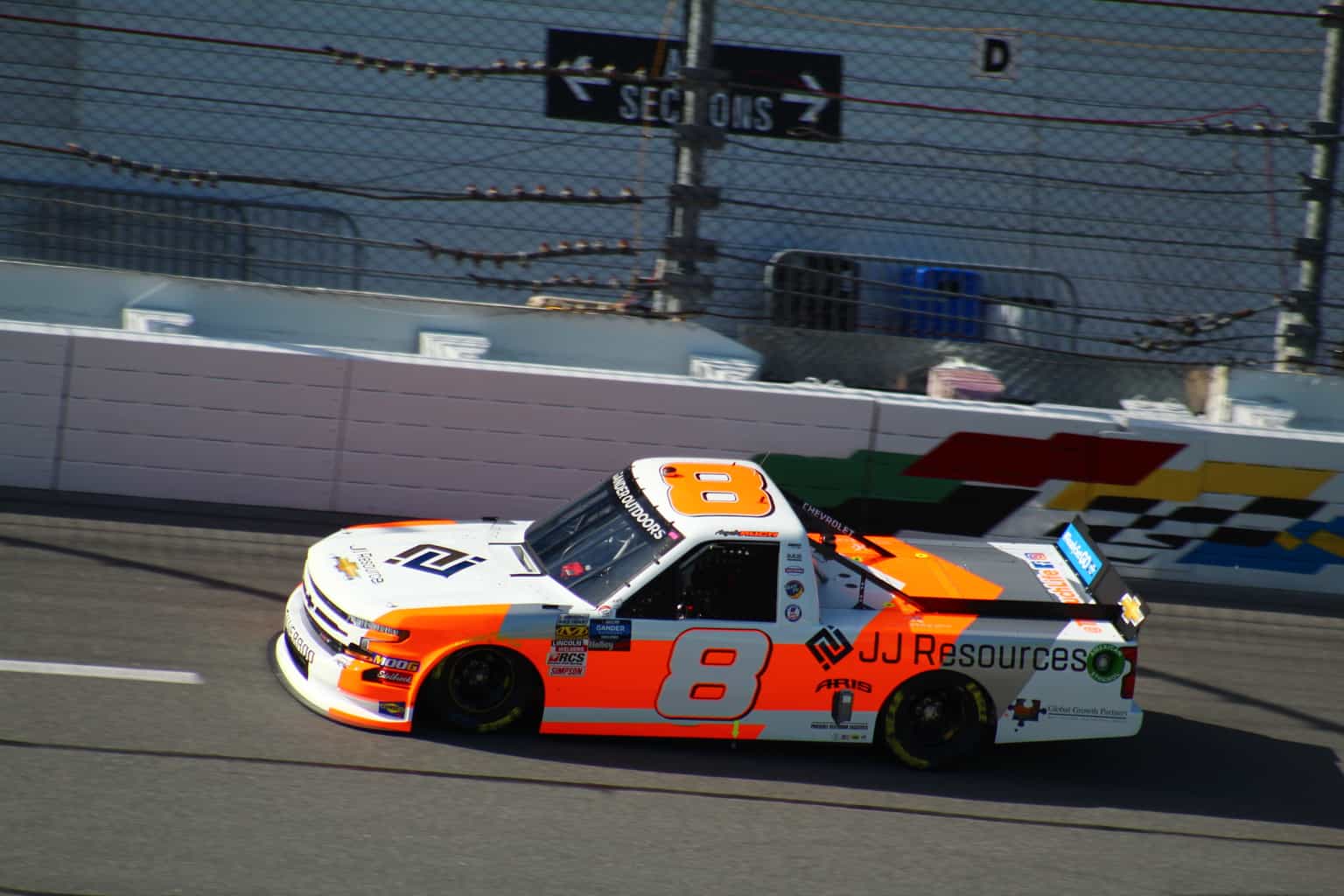 When the entry list came out for the NextEra Energy Resources 250 at Daytona International Speedway, seeing Angela Ruch on the entry list in NEMCO Motorsports’ No. 8 Chevrolet was a shock.

After all, the niece of Daytona 500 winner Derrike Cope had not competed in a Gander Outdoors Truck Series race since she finished 30th at Martinsville Speedway in 2010. In the nine years since then, Ruch had only competed in 14 NASCAR Xfinity Series races, with a best finish of 25th at New Hampshire Motor Speedway.

But Ruch turned some heads in the Daytona Truck race on Friday night (Feb. 15) with an eventful eighth-place finish. Her performance was one of the best ever by woman in GOTS history, second only to Jennifer Jo Cobb‘s sixth place at Daytona in 2011.

“Woo, a top-10 finish,” Ruch said after the race. “I don’t even know what to say. It’s spectacular for us. It’s my first time here at Daytona, and a great run. A good group of guys behind me — Chris Rice from Kaulig Racing helped me. All of the Nemechek boys. This is how it’s done.

“To drive for Joe Nemechek and John Hunter [Nemechek] and to take over a ride like that, what else can I say?” Ruch said. “[Joe’s] a legend. He’s won races here, and that’s the most help I’ve ever gotten from any driver.”

John Hunter Nemechek, whose advancement to the Xfinity Series opened up the No. 8 ride, wore different hats as a crew chief for his dad and an owner for both trucks.

“[Ruch] did really well. She did everything that we told her,” the younger Nemechek said. “She wants to learn. That’s what’s cool.”

Ruch ran a conservative and clean race in an event where only nine trucks finished — a Truck Series record.

Since she is a part-time driver, Ruch stayed away from the lead draft in the first two stages of the race. But once the race hit the final stage, Ruch got up on the wheel and raced her way into the top five.

“They just said to hold on and be patience, and that’s pretty much what I did,” Ruch said. “And I got to run with some guys in the draft. It was pretty awesome.”

From the @Angela__Ruch radio – she's inside the top 5 – frantic because she literally doesn't know how to save fuel. The crew had to eventually abandon the idea.

But they're excited. "Oh, the story you can tell if you wheel that thing inside the top 5" #NASCAR #NextEra250

Ruch even briefly got to the lead of the race for two laps before getting shuffled back. Her racing even got her team owner and teammate Joe Nemechek nervous.

But Ruch outlasted Nemechek, who was involved in a late crash. Ruch said she had a truck that could win, but that effort was halted when the truck dropped a cylinder.

Ruch had to ride the remaining laps of the race away from the lead draft, which ultimately helped as the most of the field crashed out. When the checkered flag flew, the No. 8 truck was still creeping along in eighth place.

“I would say [dropping a cylinder] was [a blessing in disguise], but to be honest with you, I would’ve liked to have gone for the win the last few laps,” Ruch said. “But it is what it is. A top-10 finish for us is a win.

“I’ve never been in this type of equipment in my life, so I’m thankful to be here and thankful to have a great team behind me.”

The race came at an already crucial point in Ruch’s life. She and her husband are adopting a child that was expected to be born in Charlotte on Thursday night (Feb. 15). This left the couple on standby all week.

“The whole adoption thing has been a tough ride, but we have a little boy coming here any day, any hour,” Ruch said. “I couldn’t be more excited to bring a little boy into this world and to show him what a woman can do.”

Ruch will next pilot at NEMCO truck at either Las Vegas Motor Speedway or Martinsville. She’s expected to race in five to 10 races for the team. Prior to her racing the No. 8, Ryan Newman was the only driver not named Nemechek to race for the NEMCO’s primary team.

Ruch said NEMCO was the only team that would give her an opportunity this go-around.

In addition to racing, Ruch is now starring in the Facebook reality show The Ruch Life.

Aw, come on. There were only 9 trucks running at the end. Her race was more just luck at missing being involved in the bigger crashes. But let’s keep doing the Danica thing with any chick racer that comes along.

Me
Reply to  sol Shine

Way to be a douch…