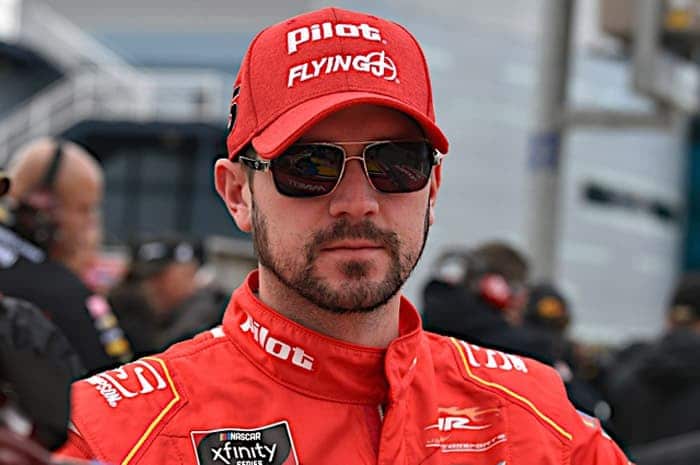 Michael Annett could not care less how many passes happened Saturday (Feb. 16) at Daytona International Speedway. At the end of the day, he left a NASCAR Xfinity Series winner.

Annett led a race-high 45 laps and stayed in control down the stretch to win the 2019 NASCAR Experience 300.  Teammate Justin Allgaier also served as a blocker behind him, unable to get a run of his own. The duo came single file to the line on a day when the track struggled to ever break in a second groove.

A track known for the parity of restrictor plate racing produced a parade. Cars struggled to run on the inside line with several drivers kicked to the back for trying. The end result was the lead pack content to ride in place, also making it a track position race where pit road played a major role in sorting out the field.

That’s where Annett put himself in position. After suffering through an uncontrolled tire violation earlier in the day, he started on the front row following the race’s final caution with 45 laps to go. From there, he paced the field the rest of the way, leading more laps than he had in any season of his 12-year NASCAR career.

The win came in Annett’s 230th start and the start of his third year driving for JR Motorsports. One year after missing the Xfinity Series playoffs, he’ll be locked in with six months to spare.

“It’s a huge weight off my shoulders,” Annett said in Victory Lane. “Now, we can go get a bunch of them. This is amazing. [JR Motorsports] stuck with me through the hard times.  Our slogan this year is one team, one dream, one goal. This is one of them, so we’re starting off good.”

Annett’s car owner, Dale Earnhardt Jr., credited the addition of Travis Mack to the team. Mack, the crew chief for Kasey Kahne last year in the Monster Energy NASCAR Cup Series, was released from that role midseason. Earnhardt seized upon the opportunity and added Mack to the newly reformed No. 1 team in order to help Annett develop as a driver.

“I knew I needed him here with Michael Annett and that combination would be great,” Earnhardt said. “We’re seeing the results of that today. Michael has a great chance on seeing the best days of his career this season.”

Allgaier was forced to settle for second, unable to get a run on the final lap. But his frustration with finishing runner-up took a back seat to the good feelings he had for his teammate’s first win.

“He’s tried so hard, to see the effort the put in, especially in the offseason,” Allgaier said. “It’s really, really cool.”

The drivers understood the racing wasn’t exactly the edge-of-your-seat type. But there was a lot of head-scratching as to what, if anything, could be done differently.

“Just a weird day,” said third-place finisher Brandon Jones. “So hard to get a pack to form, it was just kind of follow the leader a little bit.  It was really hard to be offset to a car and use the draft to our advantage.”

“I felt the race was fairly calm,” Allgaier added. “I thought the inside line was going to be the place to be… don’t have a good answer for [why it never developed]. For whatever reason, we just couldn’t make [those runs].”

“We all worked hard,” he said, also thanking new backer Larry’s Lemonade. “Sponsorship is what made this thing go and we got really updated on our equipment and just had a great finish.”

“I felt like I was back in the ’50s,” Keselowski said. “Running a convertible on the beach.” His team failed to finish in 37th place.

Christopher Bell ran sixth in the race, followed by Green. John Hunter Nemechek, Tyler Reddick and Chase Elliott rounded out the top 10 – much to the latter’s chagrin.

"I really thought with 3,4, 5 guys you could get the inside line going. Those guys weren’t willing to be very patient with it. Sorry." – @chaseelliott #NASCAR #NASCARRacingExp300

The race also had just four caution flags one year after this race set a new Daytona Xfinity record with 12.

Follow the leader again. Tomorrow will finish of that. Great races nascar.

Yeah, and unfortunately for nascar, more non-fans probably tune in to the Daytona 500 than any other race of the year, and they will think, “what’s so great about this single file parade, no use the watch this boring mess.” Little will they know that the best race in Daytona this weekend, by far, was the truck race Friday night.

If the 500 has a similar last lap train there will be a massive demo derby when the leader tries to block a run and the car running last will win through the carnage like AJ Foyt at Indy in 1967. Imagine Johnson trying to block the 18.

This comparison is totally wrong. AJ was already the leader. There was an Xfinity race at Daytona a few years back that had a big crash coming to the checker and the seventh place car won.

Imagine the Pearson-Petty crash at the end of this year’s event? The winning car would probably look like Terry Labonte’s after Earnhardt rattled his cage too late on the last lap, a lesson he learned for the next race which he admitted to.

“From there, he paced the field the rest of the way, leading more laps than he had in any season of his 12-year long NASCAR career.”
I imagine more than one cup driver is dreaming to do an Annett in the 500 (by winning, or maybe just by leading a bunch of laps).

Yep. That’s about what I expected and exactly what I feared. Tomorrow’s race may be one of the worst 500’s ever if something magical doesn’t happen. Maybe they should put that sticky stuff that they use at Bristol on the inside lane. If that doesn’t work then oil down the top line. Anything to make these guys do something besides ride around in a parade.
I still feel that something is seriously missing with these drivers. I can see the top six waiting until the last lap but if you are 7th or back the last lap is too late to wait to make a move (unless there is a wreck and you just happen to sneak through). Yet those drivers would rather stay in line to finish 7-8-9-10-etc than try something. I just can’t wrap my mind around that line of thinking.

Points racing in the first race is nauseating. I lost interest in xfinity race by the end of the first segment.

I really tried watching this parade charade, but I changed the channel about half way thru the race. Doesn’t nascar get the picture? I guess not. I’ve been watching the sport for a long, long time and something has to change.

It’s appropriate that Keselowski’s car became a convertible. They’re great for parades. Maybe tomorrow Miss Daytona can throw candy from it to the suckers who bought tickets to the 500.

I loved how the commentators told the audience that the 500 was sold out. Wonder how many seats will be covered by advertising banners?

Yes, that Xfinity race at Daytona was easily one of the worst I’ve seen in years! How boring!!! If the same thing occurs tomorrow, people will be changing the channel long before it’s over!

NASCAR better figure out quickly that fans want more short track and road course races. These restrictor plate and over abundant intermediate tracks have produced an unappealing product. You can focus on building and trying to manipulate aero and engine packages which produce artificial side by side racing or you can place an emphasis on venues which naturally create a more natural style of racing. While I am not a fan who is new to NASCAR, I do understand there’s a new generation in the car culture who truly enjoys taking their cars to open track days. With tracks like COTA, Road america, Mid Ohio, Lime Rock, in addition to Watkins’s Glen and Sears Point, you have an opportunity to create enthusiasm that is seriously lacking; unless NASCAR is content on the type of racing we’ve been subject to at Speedweeks this year, drastic changes to occur soon.

I stand by my assertion that it’s simply not possible to have good racing on tracks greater than one mile.

What good is a pre-race inspection if it can’t catch a manufacturing problem with the roof hatch? Also where was the tether that are supposed to be on these pieces, i.e. hood & flaps, trunk, roof flaps?