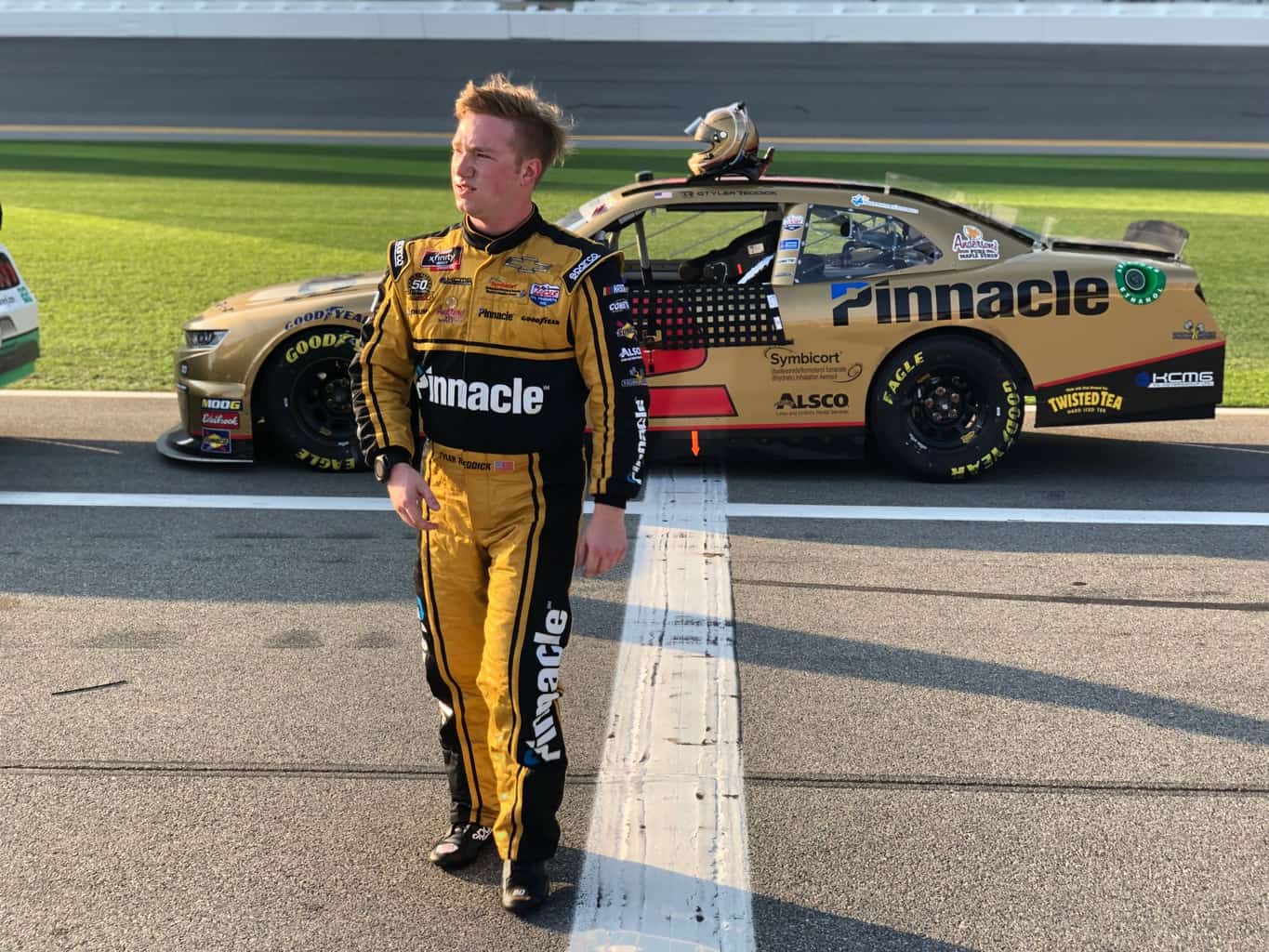 Tyler Reddick tried to make the low line work, but it was too little too late for the defending Xfinity Series champion. (Photo/Davey Segal)

Tyler Reddick knows what it takes to win at Daytona International Speedway. One year ago, he was standing in Victory Lane celebrating what would be the start to his championship season.

Fast forward to 2019 and the situation began similar, albeit with a different team.

He won the pole, but was forced to start at the rear due to changing a tire. He was able to work his way through the field with relative ease, but couldn’t make moves stick well enough to challenge for the win and settled for a ninth-place finish.

“With the way the race went today, I thought our Pinnacle Financial Partners Camaro was going to get right back up there right away,” he said. “Historically, you can get right back up there. Everyone talks about, ‘I don’t know why everyone just runs around the top,’ but man, this track is getting older again.

“I can’t think of how many years it’s been since they had the repave baking down here in the Florida sun. It’s starting to get those characteristics and looks of a place where tire rubber is really starting to lay down. I can’t remember where I’ve ever seen a place lay down rubber in the tri-oval in the bottom groove. This track just might be starting to age. It’s getting a lot harder to keep grip in these cars.”

After leading five laps, things looked to be heading in the right direction for the No. 2 driver. But a problem on the last pit stop with fueling forced them to come from the rear once again.

“Somehow our fuel filler busted and we couldn’t get any fuel in the car on the last stop,” he said. “It ended up costing us all the track position we had there. Just made us have to work a little bit harder to get back up there.”

Reddick was of of the only drivers (along with eventual 10th-place finisher Chase Elliott) who dared to make moves to the inside, side-drafting cars for position. At the end, it wasn’t that he and the rest of the pack weren’t trying to make moves on eventual winner Michael Annett. They just couldn’t complete the maneuvers.

“Everyone was trying to make moves all race long,” he said. “It was just hard to make them stick. The top was formed together so well. More than half the field was going to have to go on the bottom to withstand the top. It seemed like the top was just the place to be today just like it was in the Duels. These cars are much more sensitive to a side-draft on the right side than they are on the left, so it’s a lot easier for the outside to pin the inside.”

Reddick will start 39th in his first Daytona 500 Sunday afternoon for Richard Childress Racing. When asked if the racing would be similar to what was seen in the Xfinity event, he was fairly confident things would be contrasting.

“There’s definitely some things I can take from today for tomorrow’s race. We had a fast Pinnacle Financial Partners Chevrolet, and I can’t wait to get back at it tomorrow,” @TylerReddick tells @NASCARONFOX. pic.twitter.com/d1ifGH0x18

“It’ll obviously be different,” he said. “There’ll be more competitive cars in that single file line so I think if we can get enough people to get runs on the bottom they’ll be able to make progress and get up there. But you have to really work together with people to make that bottom work. It’s not sustainable. you’re only going to barely be able to use it tp get to the front. And once you do that, you’re going to have to get back to the top.”

Earrnhardt’s radio chatter with spotter he wanted to move but kept being told not yet. This follow the leader, iroc racing leaves a lot to be desire.

Tyler Reddick won the pole but had to start at the back of the pack, but didn’t…. He went back as far as 10 from the back and then got back in line WHY?

Reddick is totally wrong. The 500 will be just another follow the leader race. The race starts with half the cars on the inside, but watch how fast that line falls backwards. NASCAR really missed it with this setup. Put the ten fastest cars on the inside lane, mandate they have to stay there for thirty laps and I promise you they will still fall to the rear in just a few laps. I
PATHETIC