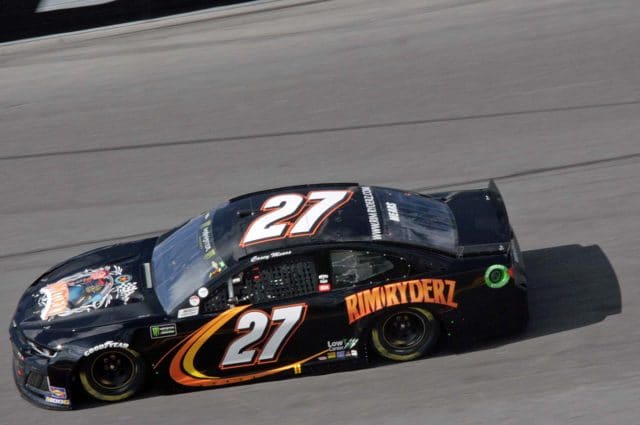 Casey Mears was one of the feel-good stories coming into the Daytona 500.

The 14-year Monster Energy NASCAR Cup Series veteran qualified a non-chartered Germain Racing/Premium Motorsports entry into the race after not making a Cup start since 2016. His most recent national touring series race was in the NASCAR Xfinity Series in 2017.

But Mears’ effort ended just past halfway in Sunday night’s race (Feb. 17) at Daytona International Speedway. Mears collided with Parker Kligerman on lap 107, knocking Mears’ No. 27 out of the race. Mears ended the race in 40th, while Kligerman went on to finish 15th.

Trouble in turn 1 for Casey Mears and Parker Kligerman. pic.twitter.com/UL5ps0ptVa

After the wreck, Kligerman’s hand gestures showed his displeasure for Mears, but Mears said Kligerman was at fault for the wreck.

“Ridiculous. The leaders were catching us, [Kligerman] panicked he was going to go a lap down,” Mears said. “He tried to shove his way in front of me… I was laughing, he drove by me, hand out window… How are you mad at me? Bonehead move.”

I have know idea what the 96 was thinking??? We were all just riding and going by him on the outside a lot faster, he pulled in front of me and I had to dodge him. Desperate move… TV only showed 2nd half of it, missed what started it all. #mearsgang

Mears said he was racing conservatively when the incident.

“We were just biding out time, waiting for the next caution to come out for the stage break,” Mears said. “If I knew this was going to happen, I would’ve just went up in the front, mixed it up and had some fun.”

With no plans set for the future, this may have been Mears’ final Cup start.

“This was a one-off deal, and wrecking like this isn’t going to help us go run another one,” Mears said.

If this is the end for Mears, then he walks away from the sport with one win, three poles and 13 top fives at the Cup level. The highest he ever finished in points was 14th in 2006.