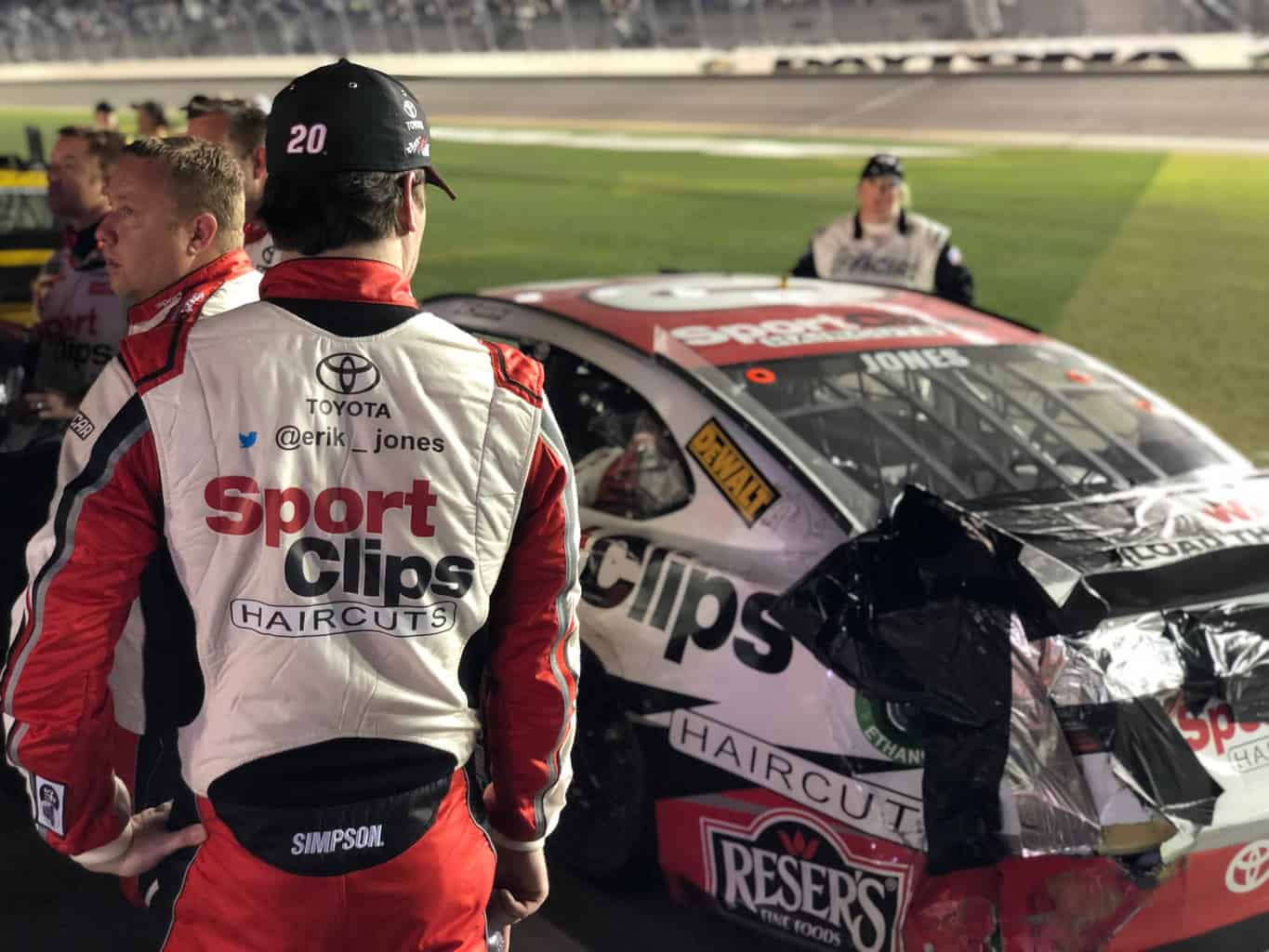 Erik Jones drove this beaten and battered car to a third-place finish in the Daytona 500. (Photo/Davey Segal)

If you took a look at Erik Jones‘ car on pit road after the race, you’d assume he finished a few laps down after being involved in a late-race crash.

But Jones and his No. 20 team rebounded from a lap 192 melee which damaged the rear bumper to finish an astounding third-place in the Daytona 500, completing a 1-2-3 podium sweep for Joe Gibbs Racing.

But before crossing the finish line as the checkered flag waved, he had to survive overtime and multiple late-race restarts, which ultimately helped his JGR teammates Denny Hamlin to his second victory in the Great American Race and Kyle Busch to a runner-up result.

“It’s nerve-wracking because there’s so many guys making aggressive moves,” Jones said. “You don’t want to be the guy that makes the wrong move and causes the wreck, but you still have to be aggressive enough to put yourself in a spot to move to the front. It’s a tough situation and daunting at first, but it’s fun to get into and give it your all there in the last few laps.”

After coming to pit road for repairs with under 10 laps to go in the scheduled distance, Jones realized the car actually wasn’t handling too bad.

“You know, the car was still pretty good after the damage,” he said. “It looks really tore up, but it went down the straightaway really good. The Sport Clips Camry was pretty quick all day. I think had we got had our issue and had to pit, we could have been right up there with Kyle and Denny for the remainder of the race, hopefully without damage.

The issue he referred to had to do with fuel pressure. While three-wide on the backstretch, Jones dropped onto the apron with what appeared to be a big problem. But on second thought, it turned out to be nothing.

“I was just driving down the frontstretch and lost fuel pressure,” he said. “And it was running, but just not very good. It ran terrible all the way back to pit road. I got to pit road, pulled into the pit stall, and I said, now it’s running fine, so I took back off and I ran the rest of the race. I don’t know.”

That was the first of many trips to pit lane as the No. 20 team dissected the damage that eventually acquired in one of the Big Ones.

“When we first came to pit road, we were just trying to get back out there and run around at minimum speed trying to pick up a couple spots,” he said. “And then a couple more wrecks happened, we got back on the lead lap and it ended up that it still drove pretty good. This Sport Clips Camry just found its way back to the front. It’s great to get a top five out of a day when you don’t think you’re going to finish in the top 20. A good start to the season, the best start that I’ve had to my Cup career so far. Hopefully we can keep it rolling.”

Jones was in the midst of three-wide battles all afternoon and evening long. The level of aggression was ratcheted up for the 500-miler throughout the entirety of the event.

“It actually was pretty aggressive all day,” he said. “We didn’t start wrecking until the end but guys were making big moves and trying to make things happen really from lap 1. You just saw people weren’t content. Nobody wanted to ride around the top all day, we want to try to get up front, get some stage points and win the race. That’s why you saw that and obviously the aggression comes in the last 40 laps and causes some wrecks.”

Jones worked closely with JD Gibbs, who passed away a couple weeks ago after a long battle with a neurological disease. Almost too good to be true, he tried to put the JGR 1-2-3 in perspective.

“It’s pretty awesome,” Jones said. “I knew coming out of (Turn) 4, I wasn’t going to really have a shot to win it at that point. But I saw Denny and Kyle and was hoping to get that 1-2-3 for him more than anything. Really cool for Joe. We all miss JD and it’s cool to come right off the bat, especially the No. 11 car in Victory Lane, it’s pretty special. It’s neat to see how it all worked out.”

Jones will look to carry his momentum at Atlanta Motor Speedway next weekend.

One of the best recoveries I’ve seen in a long time.

One of the best recoveries I’ve seen in a long time.

In the post race press conference, alongside Logano and Busch, Jones was asked how he made his way to third with such a damaged car. Logano pointed out that sometimes you have good damage. Implying that with the rear smashed down and the spoiler more out of the air that Jones had a fast car even though it look pretty bad.