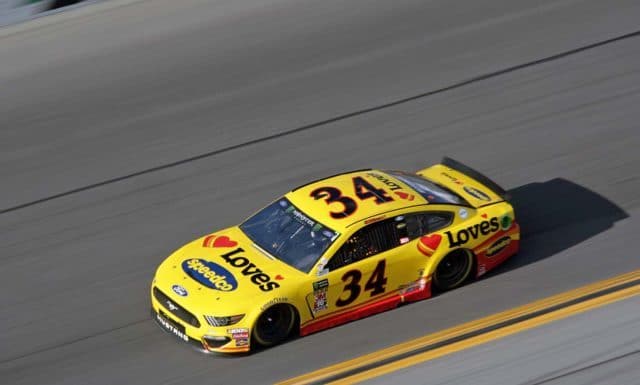 Michael McDowell ran one of the best races of his career in the Daytona 500 on Sunday (Feb. 17).

The 11-year veteran finished fifth in the season opener at Daytona International Speedway for just his second-career top five-finish. And yet, McDowell wanted more.

“For a small team, it’s awesome. There’s no doubt about it,” McDowell said. “But I’d be lying to y’all if I told you I was over-the-moon excited. I’ve been in the Cup Series over 10 years now. I have one goal, and one goal only, and that’s to get a win. I was close to getting there tonight, or at least had a shot, and wasn’t able to get it done at the end.”

Joey Logano got around McDowell, who left with a choice for the remainder of overtime: push Logano or Busch. He chose Busch, despite Logano being a fellow Ford driver.

“I would’ve loved to have worked with Joey, but he was moving left to right. The [No.] 18 had a big run, and Joey had a lot of damage. The back of his car was completely smashed — no rear bumper, parachute hanging out of it. Joey wasn’t going to win the race. I wanted to put myself in the best position to win a race.”

Logano confronted McDowell after the race for choosing Busch instead of him.

“I just told him that my team doesn’t pay me to push Joey Logano to a win,” McDowell said. “At 200 miles per hour, I made a split-second decision on what was the fastest car and who had the best shot of winning the race, and that’s where I went. And the Fords weren’t that friendly to me this weekend.”

Logano explained his side of the story.

“I thought with the Blue Oval behind [Busch] that the Ford would come with me,” Logano said. “Typically, you kind of expect manufacturers to work together like the Toyotas do or the Chevys do, so I was expecting that as well coming to the checkered flag. I was very surprised.”

Another incident McDowell had with a Ford teammate came with Clint Bowyer on the second to last restart. Bowyer snuck underneath of McDowell and then cut up the track before he had cleared the No. 34. The two made contact, sending the No. 14 up into William Byron, causing a major crash.

“The Bowyer wreck was all [Bowyer’s] fault,” McDowell said. “He flat out tried to shook me out and then cleared himself, and he wasn’t clear.”

Bowyer defended himself, saying he had a big run and couldn’t let it go to waste.

“I had a big run on the [No.] 34 and knew that I had to make quick work of him because in the mirror they were going three-wide and losing their minds,” Bowyer said. “So you knew that was going to come down on you. So I decided to lose my mind too.”

McDowell was disappointed Bowyer made the move on him.

“That’s what’s so frustrating,” McDowell said. “You got guys that are like, ‘Hey, why didn’t you go with me?’ Because every time I’m in the front, you shook me out so what makes you think I’m going to push you to a win when you leave me high and dry the whole entire day.”

If Bowyer had stayed close to the line the wreck wouldn’t have happened and the ending could have been different. Why does any driver think he’ll get a break from another driver with the 500 on the line?

yep, in a night of dumb moves that was probably the most obvious. A no hoper from the beginning.

Well they don’t get paid to follow people. Tried it and missed by three inches.