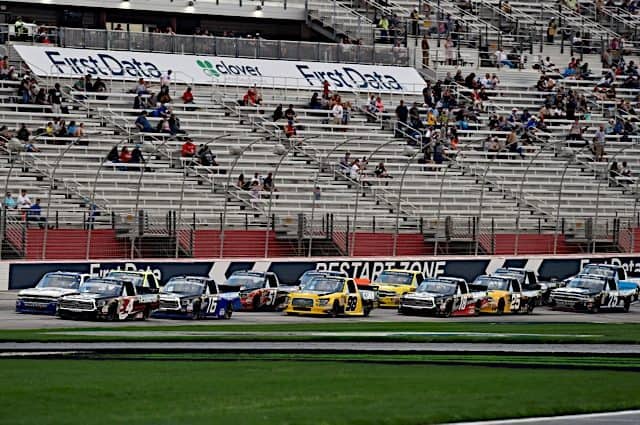 The NASCAR Gander Outdoors Truck Series returns to action this Saturday (Feb. 23) at Atlanta Motor Speedway. 33 trucks are currently on the entry list, meaning one team will go home early.

All-time leading Truck Series winner and Monster Energy NASCAR Cup Series champion Kyle Busch makes his season debut in his own No. 51 truck. Joining him are other notable Daytona 500 standouts, Ross Chastain driving the No. 45 Niece Motorsports machine and Parker Kligerman in the Henderson Motorsports No. 75.

Anthony Alfredo will make his debut with DGR-Crosley in the No. 17, replacing team co-owner David Gilliland. Xfinity Series team owner/driver BJ McLeod is entered with Jacob Wallace Racing, which has largely driven at Eldora Speedway in the past, in a Chevrolet.

Chad Finley returns to the series in his No. 42 Chevrolet, replacing Robby Lyons. The two drivers plan to share the No. 42 this season.  Finally, Cory Roper will be back with his No. 04 team after a heavy crash Friday night in Daytona.

The Atlanta 200 from Atlanta Motor Speedway is Saturday, Feb. 23 on Fox Sports 1. The race is scheduled to start shortly after 4:30 p.m. ET as the second half of a doubleheader with the Xfinity Series.

Embarking on his first season with Frontstretch, Alex Timms brings forth a lifelong passion for all things NASCAR. Hailing from the beaches of Long Island, Alex serves as a freelance multimedia journalist and formerly interned at New Hampshire Motor Speedway and CBS Sports Radio. With his versatility across all digital media channels, you can catch Alex producing all types of visual content. Follow along on Twitter @AlexTimmsMedia.
Previous Thinkin’ Out Loud: 2019 Daytona 500
Next Entry List: Rinnai 250