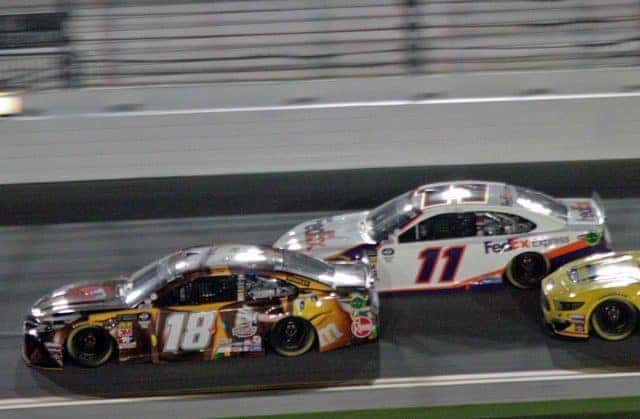 The 61st Daytona 500 was, for the most part, a pretty solid race, as both the low and high lines had times of dominance There was a good amount of side-by-side racing throughout. But by the end of the 2019 Monster Energy NASCAR Cup Series season opener, the race had become a mess.

There were nine accidents in total, most coming in the final stage, as there were 12 yellow flags shown in all, and two red flag stoppages.

Similar to Friday night’s Gander Outdoors Truck Series race, nearly every vehicle involved had some type of damage ( when only nine of 32 trucks finished).  On Sunday, 19 of the 40 cars were running at the end of the 207-lap overtime marathon, and according to Fox, only three emerged unscathed from the chaos, those being Denny Hamlin, Kyle Busch and Ross Chastain.

Kyle Larson was in the center of several incidents and still finished seventh. That’s the kind of race it was.  Ricky Stenhouse Jr caused two wrecks but survived for a top-15 run.

There were 14 cars managed to finish on the lead lap, with Parker Kligerman scoring a top-15, two laps down in the open Gaunt Brothers Racing Toyota after barely making the show at all in his Duel.

It was a spectacle, that was for sure.

Joe Gibbs Racing not only had three of their four-car stable survive, but they swept the podium as Denny Hamlin triumphed, followed by Kyle Busch and Erik Jones. Also notable was that the fourth-place driver was reigning champion Joey Logano from Team Penske, a former JGR driver. While their teammate-by-alliance Matt DiBenedetto didn’t have the finish he hoped for (28th after the First Big One), he doubled his career laps led total in his first race in the Leavine Family Racing No. 95.  Finally, fifth-place Michael McDowell, piloting the Front Row Motorsports No. 34, is a former JGR driver in the Xfinity Series, and filled in for Busch in 2011 in Cup.

Rick Ware Racing isn’t one of the underdog teams that usually have many friends, and they’ll be significantly farther back in the doghouse after both their cars destroyed Richard Childress Racing and Hendrick Motorsports equipment. On pit road – no less.

Welcome (back, technically) to the Cup Series, Ryan Preece. The rookie driver in the JTG-Daugherty Racing No. 47 earned a career-best MENCS finish with his eighth-place result, and gave him three straight top-10s in the last three races, counting the final two NXS races from last season at JGR. Preece drove five MENCS races in 2015 for Premium Motorsports.

Hendrick will be pleased that it’s a while until Talladega. Dating back to the beginning of the 2017 season, they’ve had at least one car wreck in 13 of the past 15 plate races, with the only exceptions the 2017 and 2019 Duels.

Ross Chastain earned his best-ever Cup finish in 37 starts with his 10th-place run for Premium Motorsports. His previous best was 18th at the spring Texas race last year, which was also a crashfest. Chastain also ran well in the NXS race on Saturday before finishing 13th, and scored a top-five with Niece Motorsports in the Friday night carnage in the Truck Series race.

Martin Truex Jr. does not agree with Daytona. In 28 starts at the track, Truex has an average finish of 22nd, scored only two top-fives (runner-up each time) and four top-10s, with seven DNFs, including Sunday’s 35th in his first race for JGR in the No. 19. Those seven DNFs have come with all four teams he’s driven for in his Cup career.

The best regular paint scheme was Bubba Wallace in the No. 43 Richard Petty Motorsports Chevy, who picked up AfterShokz headphones as a sponsor for the Great American Race. The black works really well with Petty Blue, and the orange highlights fit nicely.

Richard Childress Racing is celebrating its fiftieth anniversary this season, so to commemorate the occasion Austin Dillon‘s Dow No. 3, Daniel Hemric‘s Bass Pro/Caterpillar No. 8 and Tyler Reddick‘s NXS No. 2 were all painted solid gold, which looked amazing and seemed very classy.

The return of Old Spice to the Cup Series should be lauded, especially for a small underdog team like Go Fas Racing, but the No. 32 was….dreadful? Stunningly bad? Somewhat frightening? All those of could work, but Corey LaJoie‘s massive head coating the entire hood was definitely memorable, so…mission accomplished. (No one ever repeat this stunt, please.)

Early on in the race, he brought out the first caution because of a huge gash up the right side of his face – er, hood – apparently because of a shaving accident, as Fox never explained what happened.

As LaJoie explained on Twitter at race’s end, that gash wasn’t caused by a gigantic razor – he accidentally blew the right front tire.

Driver messed up and flat spotted a RF on a green flag stop. It blew out and made our day tough. We rallied for a p18 finish in my first race with @GoFasRacing32 guys. On to Atlanta.

Following his involvement in an early accident, Wallace was quite unhappy with someone unidentified, perhaps Hemric. Reddick fired right back to defend his teammate from the wrath of their teammate-by-alliance after the race.

Let me go throw a short track brake package on my car for you. Anything else you need crybaby? ?? https://t.co/0sVYcDkvwb

On a more lighthearted and happier note, Ryan Blaney‘s crew was five dollars richer after finding cash on the No. 12’s grill during a pit stop. File under “weird things happen in racing sometimes.”

On the last pit stop for @Blaney, the @Menards crew found a five dollar ? bill on the grill. #NASCAR | #Daytona500⁠ ⁠ pic.twitter.com/pRejdIXMzA

All three national series go to northern Georgia this weekend as the “real” season gets underway, and the first for-points action with the new MENCS package. The Mustang is still new and there will be a learning curve, but the Team Penske and Stewart-Haas drivers will be fine and up front this weekend, with either Joey Logano or Kevin Harvick taking the victory.

The Folds of Honor QuikTrip 500 will be at Atlanta Motor Speedway on Sunday, February 24 at 2 p.m. on Fox.

Note to Fox: LOSE THAT MOVING CAMERA BEHIND THE FENCE ANGLE!!!!

Good finishes in restricted events don’t mean anything, especially for some drivers. Like Wallace last year, they find their normal positions in the rest of the events.