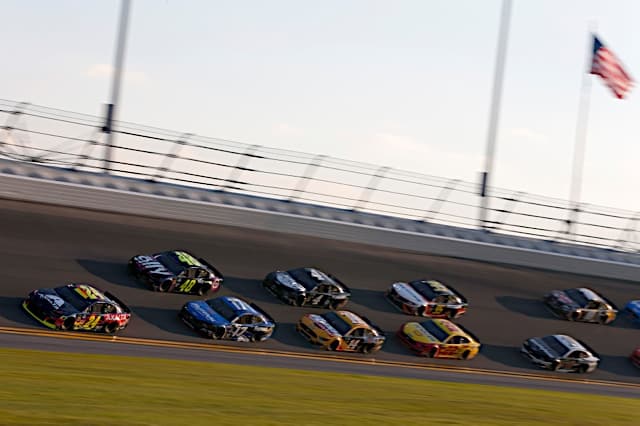 There are rare moments in sport that transcend the regular joy of victory and bitter taste of defeat and Sunday’s win for Denny Hamlin and the entire Joe Gibbs family was a good example.

Just one short month ago, the sport lost J.D. Gibbs, just 49 years of age, to a degenerative neurological disease. JD was many things to many people: father, husband, son, friend, ally, boss, mentor, encourager to name but a few.

But if I could summarize all the fulsome tributes to a life well lived that best encapsulates the emotion people felt toward and from J.D., it would be love. And for a man of unshakeable faith, what better word could describe you and your impact on others?

“This one’s for J.D.,” said Hamlin of his victory, pointing to the decal on the side of his car as he climbed from his race winning ride. “We’re desperately going to miss him.”

“What happened here is really unreal,” said team principal Joe Gibbs of his son as he walked to Victory Lane. “I’m just thrilled. I think JD had the best view of everything.”

For the veteran Hamlin, it was a second Daytona 500 victory to go with his win in 2016, elevating him into an elite class of just 12 drivers who’ve won multiple times in the Great American Race.

Upon the news of JD’s passing in January, Hamlin posted about the man who plucked him from short-track obscurity and launched him into the big time.

His car. His number. His signature above my door. I will always be grateful for what his family did for mine and the opportunity he gave me 14 years ago. Now more than ever #doitforJD

His car. His number. His signature above my door. I will always be grateful for what His family did for mine and the opportunity he gave me 14 years ago. Now more than ever #doitforJD

Current champion, and fourth place finisher, Joey Logano was another quick to recognize J.D.’s impact: “…but for what J.D. has done for my career is the reason why I’m sitting here today. As bad as I want to win it, it is pretty cool to think that the first race after his passing, to see those guys one, two, three, it just says he’s up there watching and maybe gave you guys a little extra boost there at the end.”

I’ll leave the last word on the victory to J.D.’s father, a man with three Super Bowl victories and four Cup championships.

“It is the most emotional and biggest win I’ve ever had in my life, in anything,” said Joe Gibbs. “It was the most important night in my occupational life. I know J.D. and everybody in my family was emotional.”

Better Days Ahead for DiBenedetto:

In the end, in the Great American Race, it wasn’t to be for Leavine Family Racing’s new wheelman Matt DiBenedetto who led a race-best 49 laps, challenged up front all race long and looked to be a genuine contender for the win. Nine laps from the finish, however, DiBenedetto was hooked from behind by Paul Menard triggering a ferocious, fiery wreck that took out over half the field – 21 cars in total. But for a first race with his new team, a new crew chief in Mike Wheeler not to mention a new manufacturer in Toyota, it was a mighty impressive effort – one of which DiBenedetto can be extremely proud. The morning after, even with the sting of defeat still fresh, he posted this on Twitter which speaks volumes about who he is as a person:

This will be the fifth full season for Dibenedetto at the Cup level and in 141 races he’s picked up four top-10’s (two of which came at Daytona) and led just 72 laps — 49 of which were on Sunday. This will be the fourth straight year Leavine Family Racing has competed across the full schedule and in the 185 Cup races they’ve run going back to 2011, the high water mark is two fourth place finishes in the summer Daytona race – Michael McDowell in 2017 and Kasey Kahne last year. Here’s hoping it’s a great, record setting season for Matt DiBenedetto and the entire LFR organization.

In fourteen attempts at the Daytona 500, Kyle Busch has finished 38th , 23rd , 8th , 4th , 41st , 14th, 8th , 17th , 34th , 19th , 3rd , 38th , 25th and 2nd on Sunday. He missed the 500 in 2015, the year he won his title, after a wreck in the Xfinity Series race the day prior. A Daytona 500 winning victory is perhaps, the one big-ticket item missing from his trophy-laden, Hall of Fame career. “It certainly is a very bittersweet situation for myself because I’d have much rather have been the one to win the race and be in Victory Lane and celebrating with my team and with everybody at Joe Gibbs Racing and being a part of the J.D. celebration” said Busch, “but overall, you know, you couldn’t be more thrilled for all the 500 people back at Joe Gibbs Racing that knew and respected and obviously looked up to J.D. for the person that he was and for the relationships that he gave all of us.” Former JGR teammate Tony Stewart went 0 for 17 in the big race so there’s no guarantee Busch will eventually win one but you can’t help but feel his time will come before he hangs up his racing gloves.

Next up, we head to Atlanta Motor Speedway for the second race of the season and the first under the new rules package. What to expect is pretty much a blank slate so looking back at the numbers is, perhaps, less informative than in previous iterations. This will be Cup race number 112 at the lightning fast, abrasive mile-and-a-half oval which has hosted Cup races going all the way back to 1960 – a race won by the legendary Fireball Roberts. This time last year, Kevin Harvick won, leading a dominant 181 laps in the process. Only six current drivers have won at AMS. As is often the case with statistical analysis of past performances, Jimmie Johnson leads the way with five wins while Kurt Busch has three and his brother Kyle and Kevin Harvick both have a pair of victories. Rounding things out, Ryan Newman and Denny Hamlin each have one win. Chase Elliott might be one to watch having finished in the top ten on all three previous occasions he’s run Cup at AMS but as I say, it’s almost impossible to know what to expect this Sunday afternoon. I’m looking forward to it.

In the last decade or so, I’ve written a lot about plummeting TV ratings, so on the rare occasion of some positive news, it’s absolutely worth a mention. The 2019 Daytona 500 picked up a 5.5 overnight rating, an eight percent increase on 2017, and a whole half point more than the NBA All-Star Game (5.0). Yes, it’s early days, very early days, and we’re still a full point down from 2016 (6.6) and 2017 (also 6.6) and a long way from the 9.9 rating garnered in 2013 thanks in part to it being Danica Patrick’s first 500 but any kind of upward trajectory is a good thing at this point. It will be interesting to see if the momentum spills over to Atlanta Motor Speedway next Sunday.