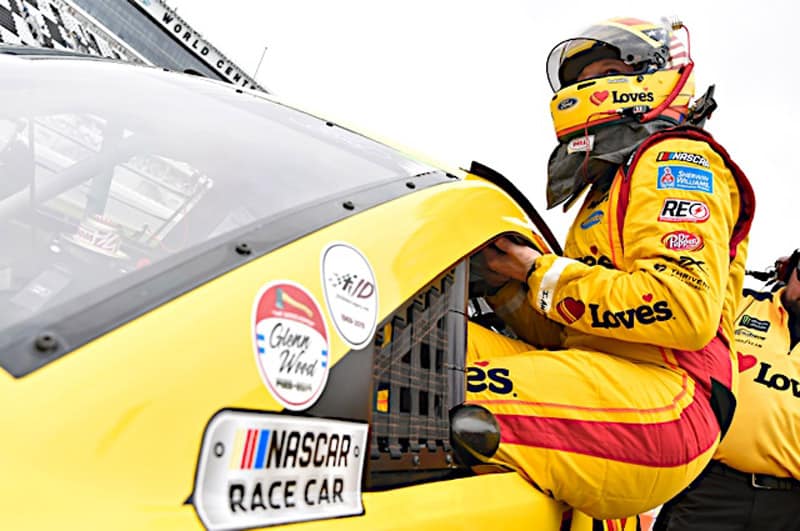 Michael McDowell had a less than memorable Speedweeks in 2019, but it certainly ended on a high note. The veteran driver steered his No. 34 Front Row Racing Ford through the late carnage at Daytona to score a fifth-place finish. McDowell’s 286th career start yielded just his second top five finish but it comes on the sport’s grandest stage.

McDowell spent the majority of the race in the second half of the field but as a barrage of late crashes thinned out the competition, he steadily moved up the leaderboard. When the green flag waved for the final restart with two laps remaining, McDowell made his move. Shoving Kyle Busch down the backstretch, he propelled the No. 18 Toyota to the runner up position. Curiously, when he had the opportunity to tuck in line behind fellow Ford driver Joey Logano, he did not and remained on the bumper of Busch. After the race, Logano was disappointed by the lack of cooperation from his manufacturer teammate, but McDowell defended his decision.

“I would’ve loved to have worked with Joey, but he was moving left to right,” McDowell said. “The [No.] 18 had a big run, and Joey had a lot of damage. The back of his car was completely smashed — no rear bumper, parachute hanging out of it. Joey wasn’t going to win the race. I wanted to put myself in the best position to win a race.”

Despite Logano’s frustration, McDowell had a different view of the situation.

“I just told him (Logano) that my team doesn’t pay me to push Joey Logano to a win,” McDowell said. “At 200 miles per hour, I made a split-second decision on what was the fastest car and who had the best shot of winning the race, and that’s where I went. And the Fords weren’t that friendly to me this weekend.”

McDowell stressed that simply running well wasn’t all that he was looking for. “For a small team, it’s awesome. There’s no doubt about it,” he said. “But I’d be lying to y’all if I told you I was over-the-moon excited. I’ve been in the Cup Series over 10 years now. I have one goal, and one goal only, and that’s to get a win. I was close to getting there tonight, or at least had a shot, and wasn’t able to get it done at the end.”

McDowell was fortunate in one aspect to even be around at the finish. Late in the race, as cars were jockeying for position, Clint Bowyer made a pass to his inside. Then, Bowyer moved up in front of McDowell’s Ford attempting to clear him. It didn’t work and the No. 34 hooked Bowyer, turning him sideways and initiating a massive pile up. However, McDowell was able to skate by unscathed and motored on for his first top five since the Coke Zero 400 at Daytona in July of 2017.

Three more underdogs occupied spots in the top ten following Sunday’s Daytona 500. For the second time in his Monster Energy NASCAR Cup Series career, Ty Dillon posted a top ten finish. He brought his Germain Racing Chevrolet to the line in the sixth position, the same finish he scored in the last plate race of 2018 at Talladega Superspeedway.

Ryan Preece notched an eighth-place finish in his first race in the JTG Daugherty Racing No. 47. Not only was it the first time that the modified standout started a Daytona 500, but it was also actually the first time he had ever even been to a Daytona 500. It was certainly a pretty solid way to get things started for the 2019 rookie contender.

Ross Chastain didn’t even expect to be running in the Cup Series in 2019. But after his Chip Ganassi Racing ride in the Xfinity Series evaporated due a sponsor controversy, he is running a full slate for Jay Robinson and Premium Motorsports. Robinson got an immediate reward when Chastain brought his unsponsored, yet undamaged car across the stripe in tenth place. It was only the second top ten for Premium in 231 starts.

Based on his 28th place finish, Matt DiBenedetto doesn’t jump off the page in terms of being a surprise. However, his performance on Sunday was quite shocking. Dibenedetto led the most laps (49) and looked to be every bit as much of a threat to win as Busch, Denny Hamlin or Logano. In fact, the Leavine Family Racing driver had his Toyota in second place when he was turned sideways by Paul Menard as the field thundered into turn three. Once his car was out of control, a quarter of the cars in the piled in and his chance to win the Daytona 500 vanished. Still, the strong showing can’t be overlooked and it will be interesting to see how competitive the team becomes as the season goes on.

On Saturday, amidst a sea of Cup affiliated programs, the Rod Seig owned teammates of Ryan Seig and 2000 Xfinity Series champion Jeff Green managed to collect finishes of fourth and seventh respectively. What is more impressive though, is the fact that were able to perform that well without the help of a field-decimating wreck. Only three drivers failed to finish the race and none were due to crash damage.

Quite the opposite was the NASCAR Gander Outdoors Truck Series race on Friday night. While only nine trucks finished the crash-laden spectacle, fourth place finisher Spencer Boyd probably would have ended up with a good result either way. Boyd ran well all night and produced a great result after finishing no better than 13th in his previous six truck starts. Josh Reaume also enjoyed a great finish, coming home sixth after beginning the race dead last (32nd). Reaume’s previous best finish in 27 starts were two 16th place results in 2017.

Brandon Brown began his racing career at the age of ten driving go-karts. Over the next few years, he won the 2006 World Karting Association Mid-South Region Jr. championship, as well as division championships in 2008 and 2009. In 2010, Brown began competing in the Whelen All-American Series with family-owned Brandonbilt Motorsports, winning a race and Rookie of the Year Award.

Brown, a graduate of Coastal Carolina University, began running in select races in the Gander Outdoors Truck Series in 2014 and started adding a few Xfinity races to his slate in 2016 driving for both his family team and longtime owner Mario Gosselin. Brown scored a fourth-place finish in the truck season opener at Daytona in 2016, his best to date in that series. For 2019, Brown plans to run a full schedule for Brandonbilt Motorsports in the NASCAR Xfinity Series. He led two laps, his first in a national touring series event and finished 18th in the season opener on Saturday. Follow along with Brown on Twitter @BrandonBrownRac.

Great job by #RossChastain and the entire Premium Motorsports team. Earned a 10th place finish in the Daytona 500 #DISupdates #Nascar. Thank you to all the sponsors that have supported our awesome team.

That was the most amazing and heartbreaking day all at the same time. Thank you all so much for the support! I am so lucky to be a part of this team

10 Years ago, 2008 Speedweeks I scored my first Tour Modified Win.

Risking everything for this chance. This is what it’s about. #Modifiedsmainly pic.twitter.com/78PhUyaG1i

Of the conversation with Joey Logano, Michael McDowell says he told driver No. 22, "My team doesnt pay me to push Joey Logano to the win." pic.twitter.com/b5PiAqxjxc

Seems he does not understand a lot of things. Too bad he did not follow the Ford plate success model, he very well could have been in VLANE. But he will never know. Don’t see any Fords giving him or his team the time of day in the future.

“I just told him (Logano) that my team doesn’t pay me to push Joey Logano to a win,”
Does this also mean Ford does not provide the team with any factory support?

“And the Fords weren’t that friendly to me this weekend.”
Instead of airing grievances to the press, one would think private comments to a Ford official might have been more productive, especially since there are 3 more plate (what else should one call Daytona and Talladega tracks?) races this year.
Regardless, deals at plate tracks historically have had a half-life that is probably only a few laps – some variation of McDowell’s complaint has been voiced for decades (and, I imagine, will continue).

Glad to see McDowell do what he believed in. All this team crap sucks unless it’s your teammate.