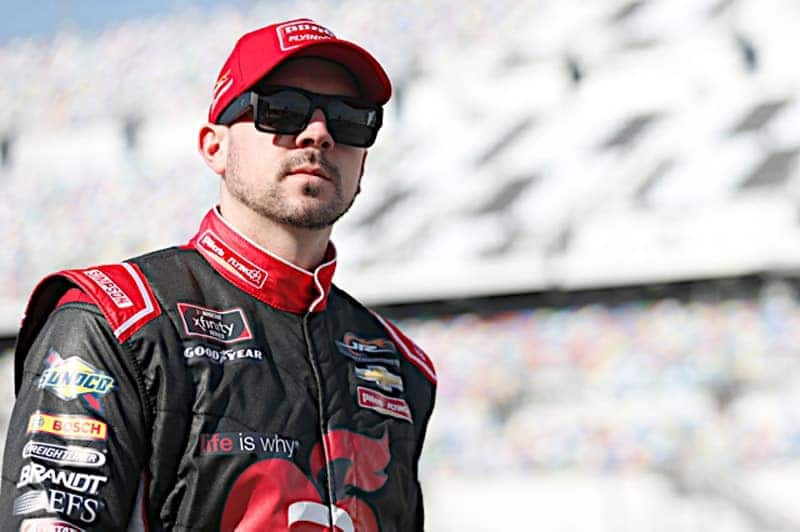 Did You Notice? … NASCAR’s final restrictor plate race reminded us why the sport is trying a different approach? Don’t get me wrong; the 2019 Daytona 500 exceeded expectations, especially after some shaky opening acts. Drivers were willing to break in an inside groove they’d been hesitant to try all Speedweeks to the tune of “it’s about time!”

In the end, Denny Hamlin broke his winless streak in impressive fashion. This second Daytona 500 in four years came with an emotional tribute win for the man who discovered him: J.D. Gibbs. Kyle Busch was denied the Daytona 500 a 14th time while impressive performances by Matt DiBenedetto and Ryan Preece reminded us fresh faces are coming. Toyota, after leading one lap during the last week of Monster Energy NASCAR Cup Series racing, finally beat back Ford and Chevrolet when it mattered most.

Joe Gibbs Racing produced a 1-2-3 finish, the first time we’ve seen that at Daytona since Hendrick Motorsports in 1997. It’s appropriate to end this chapter this way considering the way plate racing has evolved. A sport still founded on the individual needed teamwork to succeed with this plate package. The last few races, it’s been multi-car efforts and in some cases entire groups of manufacturers working together to beat back the competition.

I remember the first time Hendrick accomplished that 1-2-3 finish. Like a freight train, they blew past Bill Elliott in the final laps of the 500 to show three cars were better than one. It was the beginning of the death of a single-car program, at least one that didn’t have an alliance with a larger group. Now? Plate racing can sometimes devolve into these three or four-car efforts flexing muscle. We saw at Talladega Superspeedway last fall how that type of dedication with Stewart-Haas Racing can whip the field into submission. Or maybe you didn’t. You might have slept through it.

I’d contend DiBenedetto’s emergence up front combined with a few issues that sliced up the big teams created conditions that spiced up this year’s finish. But even with these alliances split up, a lot of the post-race chatter focused on broken promises. Joey Logano couldn’t understand why an underdog Ford driver, Michael McDowell, wouldn’t bow down and push him forward. Busch was mad Hamlin played teammate only when it appeared to suit him.

It’s never a good look when a driver needs someone else to help him win. The kicker doesn’t have the quarterback carry the winning field goal over the goalpost, does he? And of course, this need for teamwork also brought about the ugly side of plate racing: wrecks. 21 cars piled into the biggest one when Paul Menard hit DiBenedetto the wrong way. Seven days earlier, he was the victim and now he was sitting there the goat.

That’s plate racing, a 30-year experiment to slow speeds but which also did its fair share of damage. I’m talking sheet metal, mostly. But we can’t forget the 2009 Talladega wreck where Carl Edwards nearly sailed into the grandstands. Four years later, Kyle Larson came close in an Xfinity race that left over a dozen fans hurt.

Those types of close calls were supposed to stop with plates. After all, Bobby Allison’s near climb into the grandstands brought them about in the first place back in 1987. But these big wrecks still kept the risk intact. Drivers still got hurt. Excitement came with a cost.

The hope is without the plates, NASCAR can create the same type of excitement without having those near death experiences. There’s only one thing we know for certain; the love-hate, risky relationship with plate racing has finally reached its 30-year conclusion.

Did You Notice? … Both wins in Daytona for the Xfinity and Gander Outdoors Truck series were won by drivers who “bought” their way into rides? Austin Hill won his first NGOTS race with defending champion Hattori Racing Enterprises despite one top-five finish in 51 career starts. The next day, Michael Annett earned his first Xfinity win after 229 starts and over a decade’s worth of competition.

Both drivers, to be fair, were humble in their accomplishments. They were quick to credit their crew chiefs which may have the most to do with their quick transformation. Scott Zipadelli has pulled off miracles on a limited budget at HRE; keep in mind it’s not just Moffitt who had success with the program (see: Ryan Truex).

Annett and owner Dale Earnhardt Jr. were raving about the addition of crew chief Travis Mack off the scrap heap. Mack was the crew chief for an ill-fated pairing at Leavine Family Racing that ended mid-2018. He took the fall for high sponsorship and racing expectations Kasey Kahne never met before retiring altogether by the end of the year.

But the fact remains in these filler series the big winners also got there through a bigger corporate paycheck. There’s no way Hill earns his opportunity without bringing more money than defending champion Moffitt; Annett didn’t even make the playoffs last year with a team that won the series championship. Typically, you don’t get another chance with that track record unless your pockets are lined with cash.

It marks a crossroads for NASCAR as the faces of its development series threaten to become these types of opportunities. Drivers bringing sponsorship or family money still have to wheel the car to Victory Lane. They still have their own unique personalities and in some cases are as hard-working, if not more so, than those without access to cash.

But will a blue-collar fan base, itself born out of starting from the ground up, buy into these fresh faces? One of the ways in which fans latch onto someone is if you feel a connection to the driver themselves. Can they feel a connection with a driver like Angela Ruch who, after her top-10 NGOTS finish, made it clear her “husband is loaded” and they sold some real estate to make this happen? Silver spoons and moonshining don’t, at first glance, appear to go hand in hand.

NASCAR is trying hard to win back its core fan base while expanding its demographic at the same time. There’s no question the diversity Ruch represents along with Hill and Annett’s fresh faces give the sport a new look. But perhaps it’s a good thing #WinItForJD became the enduring moment of a complicated Daytona Speedweeks.

That’s far more feel-good for a sport rebuilding itself, I feel, than the guys with money capitalizing on a second, third, fourth chance others haven’t been lucky enough to get.

11 thoughts on “Did You Notice?: How Buy-A-Ride NASCAR Wins Are Perceived?”