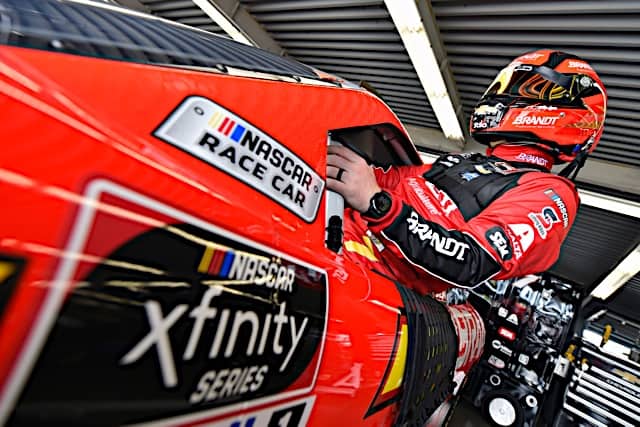 After winning the NASCAR Xfinity Series regular season championship in 2018, Justin Allgaier was atop most people’s radars for the season-ending driver’s title. Then, the playoffs came.

Allgaier, 32, won five races during the regular season, all coming in a span of 16 races. The No. 7 team entered the playoffs red hot, almost a sure lock for the Championship 4 at Homestead-Miami Speedway in mid-November.

But with a pair of finishes of 15th or worse in the opening two playoff races, Allgaier had to race hard at Dover International Speedway in October to advance to the Round of 8. Same thing, repeat, during the Round of 8. A crash on the opening lap of the race at Kansas Speedway took out the No. 7 car, along with championship-eligible drivers Christopher Bell and Austin Cindric.

Heading to ISM Raceway in the penultimate race of the season, Allgaier almost had to win the race to clinch a spot at Homestead. He won the first stage, ran strong in the second, but a late-race brake failure hindered his shot at the championship. Overall, it was a tough end to a strong year.

“The end of the year was a challenge,” Allgaier told Frontstretch at Daytona International Speedway. “It didn’t matter where we were at or what type of racetrack we were at, it just seemed like the playoffs in general, we had our problems.

“That falls squarely on us, I’m not going to deny that part of it… We’ve got our work cut for us this year to do things more in line with where we want to be at. If we do those things well, we will be in great shape.”

Though 2018 wasn’t the championship-winning performance Allgaier and the No. 7 team wanted, he did have a few career highs — the aforementioned five checkered flags, 17 top-five finishes and 741 laps led. And all he had to show for it was a seventh-place finish in the standings.

“You look at the wins and you go, ‘Man, you couldn’t ask for a better year as far as on-track performance in the regular season,’” Allgaier said. “The negatives are we just didn’t execute in the playoffs. Jason [Burdett, crew chief] and I talk a lot about execution, it’s way more important than we realize. Those opportunities aren’t always going to be there, but when you’re prepared and they come, you’ve got to capitalize on them, and we just didn’t do that.”

Surprisingly, Allgaier admitted watching other drivers compete for the championship at Homestead wasn’t tough, noting he had a “week to kind of come to realize” he wasn’t running for the title for the first time since coming back to the Xfinity Series in 2016.

Unlike the missed opportunities in 2016 and 2017, this was easier for Allgaier to settle with.

“It didn’t take me long to get over it because I knew we failed,” Allgaier said. “I had already had time to come to that grasp weeks before that. I’m a firm believer that if I put myself in better positions and I’m running better, leading the race or running up front, and don’t get myself caught up in those, then it’s not going to matter.

“I’m not going to point fingers or blame other people, I just need to do a better job in the car, and we need to do a better job on the [No.] 7 team. At the end of the day, I’m perfectly content with where the season ended because what I did, and I know I have a great team behind me. And we’re going to go into 2019 with even more to prove, and we want to win more than five races and be in the position to win a championship.”

As the season wound down, Allgaier believes he let his emotions get the best of him. But when his then-teammate, Tyler Reddick, did win the championship for JR Motorsports, Allgaier was happy, not frustrated, about that.

“If anyone was going to win a championship, I wanted to see a teammate win,” Allgaier said. “I just didn’t do a good job. I can be frustrated at it or you can use it as motivation to work harder, and right now, it’s my motivation to work harder, run better, be stronger and come out of this with a positive attitude and say, ‘Hey, you know what, we made a mistake and we’re not going to make it again.’”

As for 2019, Allgaier returns to a changed driver lineup. Michael Annett switched over to the No. 1 ride and won the season-opening event at Daytona, while the team picked up Noah Gragson from the Gander Outdoors Truck Series to race the No. 9. JRM will also run a plethora of drivers in the No. 8 car, a number new to the organization.

Despite being the veteran driver on the team, Allgaier’s not sure if he should be considered the “team leader.”

“If they [new drivers to the JRM stable] need some help, I’m more than available and will be there to help,” Allgaier said. “I want to be able to help. I want to see our guys do well, win races and championships. We’ve got extremely talented race car drivers, so I’m not opposed to them not needing help, but if they do, I’m here. I’m the old guy of the group, so that’s a tough spot to be in, but I don’t feel like my age is slowing me down on the racetrack.”

But Allgaier wants redemption. He wants that NASCAR championship — knowing that winning races will bring the Illinois native to the promise land.

“I think one goal leads to another goal, but for me, it’s all about wins and putting myself in a position to win every week,” Allgaier said. “That’s the only goal I have right now. Championships are what they are, and I want a championship really badly, but my big deal is go win races. If you’re winning races and running up front week in and week out, the championship will eventually come.”