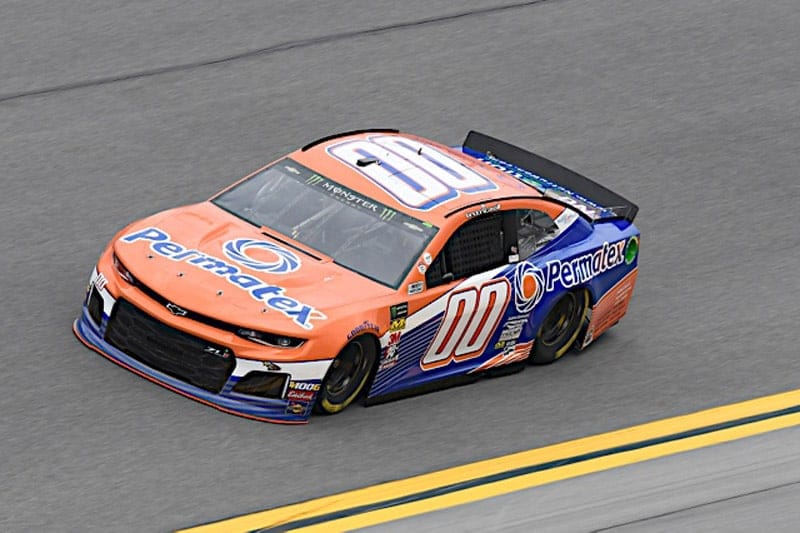 Landon Cassill returns to StarCom Racing’s No. 00 this year after driving for the organization in 29 of 36 races in 2018. The driver and team look to have an even better 2019 after forming a technical alliance with Richard Childress Racing and switching to ECR Engines.

Also, the team has a new sponsor — Permatex — which returns to NASCAR for the first time since the 1970s. Permatex was a supporter of NASCAR for its first 30 years and served as the title sponsor for a 300-mile late model sportsman race at Daytona International Speedway.

Frontstretch Editor Michael Massie caught up with Cassill to discuss the team’s changes, as well as his relationship with StarCom team manager and driver Derrike Cope, his hair, his athletic aspirations and his view on NASCAR’s underdog teams.

Michael Massie, Frontstretch: Permatex has a rich history in this sport. Can you talk about how the sponsorship came about and how proud you are to bring them back into NASCAR?

Landon Cassill: Yeah, it’s cool to have automotive sponsors, first of all. Permatex is a great automotive brand with a lot of different brands underneath them as well. To have someone who was a title sponsor of one of the original NASCAR series back in the day. Even Bill France Sr. built an engine with all Permatex products in it 60 or 70 years ago. It’s pretty cool stuff. [StarCom Motorsports] did a pretty good job contacting those folks. And they got a lot of energy. They’re really excited about the program. It’s really cool to have them on the car for a couple races.

Massie: Did you already know a little bit about their history, or has it been a learning experience for you?

Cassill: It’s been a learning experience for me, but I’ve used their products — I know the brand well. But they haven’t done a whole lot of marketing the last few years, so I think this is sort of a new energy they want to bring to the brand and show the history of the brand and how long it’s been around.

Massie: How many races are they planning on being on the car?

Cassill: I’m not sure yet. I know there’s a couple they’re looking at doing though.

Massie: Are you going to be in the No. 00 for the full season?

Massie: I’ve heard that StarCom has really kind of stepped up their game the last couple of years. They keep getting better and better equipment. How much have you seen the team grow and improve since you’ve been here?

Cassill: It’s definitely come together a lot more, as all race teams do and have to do to compete. It’s such a competitive sport that you have to step up your game every single season. For us to upgrade our engine program this year was a huge step. Hopefully, that yields some results. We have a more consistent fleet of cars now this season than we had last year, so that will be huge. But the new aero package is going to change a lot of the performance capabilities of all the cars. As a team, we have to get along and we have to work hard together.

Massie: So where do you expect to be running on the average week? Do you think you’ll up your average finish?

Cassill: I think we could definitely improve our average finish, but we’re still kind of in the same category of cars that we had been in, in terms of resources and funding. [Note: Cassill’s average finish was 29.7 last season.] But us being more put together as a team, with better people and better engines, should definitely upgrade our performance.

Cassill: I think fans like rallying behind the underdogs anyway. I think the sport is coming our way, in terms of the smaller teams. It’s being more and more known how the big teams have to operate and how they’re spending money into oblivion, and they’re not viable business models. The real teams and the real businesses that have to survive have some pretty strong fan bases. So I think that fans really rally around that. I think the sport is coming that way. NASCAR, everybody is talking about what the Gen-7 car might look like and the change of the sort of structure for these teams. I think if you’re a small team right now, you’re in a good position.

Cassill: Yeah, for sure. I’d love to. I’ve never run a marathon so I would love to do something like that. I’d like to do a full Ironman [Triathlon] before I did an actual marathon.

Massie: Why do you want to do an Ironman first?

Massie: I noticed you showed up here and you got the closely cropped hair now (see below) whereas, last year, you had the full-on plumage in the back. Are you gonna grow that back out as the year goes on?

MEET LANDON CASSILL@landoncassill will be doing a Meet and Greet at Advance Auto Parts in Daytona Beach, 1309 Belleville Road, on Friday, February 15th from 9:30AM-11:00AM.
Come see Landon and get a signed @Permatex Hero Card! pic.twitter.com/qCYTo2zW8v

Cassill: I don’t know. I just felt like it was time for a haircut. Yeah, I had long hair for about a year. It was fun, it was nice. But there were times it got in the way.

Cassill: Yeah, we get along great. I love Derrike. He’s a tremendous racer. He knows what he’s doing. He’s a guy who knows what he wants, and he’s a guy who makes me want to work hard for him and succeed for him.

In case you wondered (from the internet, so everyone knows this must be true https://www.permatex.com/who-we-are/company-overview/ ): “Permatex is a leading manufacturer, distributor and marketer of premium chemical products to the auto maintenance and repair, home and hardware markets.”
(the Permatex website also has a history section)