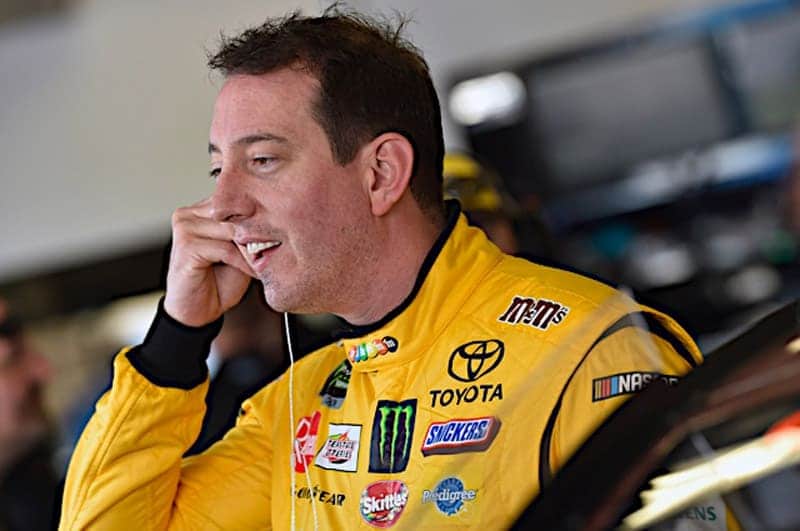 A crash-marred Daytona 500 saw Denny Hamlin survive the carnage to claim his second Daytona 500 win. After ending his long winless streak, is Hamlin poised for a championship run? After nearly winning the Great American Race, can Kyle Busch and Joey Logano put their Daytona disappointment behind them?

Although Jimmie Johnson did not make very many friends at Daytona, is his aggressiveness a sign of things to come? After a surprising Speedweeks, are William Byron and Matt DiBenedetto real contenders this year?

Many questions remain as NASCAR moves on from restrictor plate racing. Our Frontstretch experts had the difficult task of picking their top drivers following the Great American Race, and incredibly, 25 drivers received a vote by our panel following Daytona’s chaos. We narrowed them down to 12.

Busch was visibly upset after coming so close to claiming his first Daytona 500 victory, the race that has long eluded him. Yet the runner up in the 2019 edition of the Great American Race is heading to Atlanta this season with a burning fire to win under him. Look out.

Kyle Busch: "Overall, certainly bittersweet. It's awesome to see a JGR car in victory for Joe and J.D. but it's very bittersweet for M&M's, Interstate Batteries, Skittles and everything that sponsors us"

It was survival of the fittest down at Daytona. Miraculously, Hamlin wheeled his Toyota into Victory Lane without a scratch on it. The Virginian broke a 47-race winless streak in the process to claim his second Daytona 500 crown. The race was a triumph for Joe Gibbs Racing all around, as Hamlin lead teammates Busch and Erik Jones to a 1-2-3 finish, a month after the untimely death of JD Gibbs, son of team owner Joe Gibbs. As the series heads to Atlanta, Hamlin has a renewed sense of confidence as he is the first driver to have locked himself in the Playoffs.

Like Busch, Logano had his fair share of frustration following the 500. After restarting third in the final overtime, the 2019 champion was anxious to bring home the Harley J. Earl trophy to the Ford contingent. Instead, the Connecticut native found himself fuming against fellow Ford driver Michael McDowell, who decided to give Kyle Busch’s Camry a push on the final lap rather than Logano’s Mustang. Yet, McDowell was angered at Logano for shuffling him out of line earlier in the event. But like Busch, watch out. An angry driver is usually a potent one.

“OK, so maybe Logano didn’t get help from a fellow Ford driver, but a top five at Daytona is a great way to kick off his title defense.” – Rob Tiongson, The Podium Finish

Harvick did not make much noise at Daytona, but Happy heads to the Atlanta Motor Speedway this weekend as the defending race winner. Can Harvick capture the magic again at the Georgia track? We will wait and see.

Not the end that we wanted, but very proud of @KevinHarvick and everyone on the 4 team. Everyone did a great job and we had a fast car all week. Congrats to @dennyhamlin and everyone @JoeGibbsRacing .. I know that one means a lot and JD is up there smiling down.. ??

“Ran up front, but was rarely contending for the lead. Spent most of the day trailing some driver named Bussssssccccccchhhhhhh.” – Aaron Bearden, Motorsports Beat

“So if Busch converted his winning rides from 2018 into beer cans, does this mean we’ll see Hunt Brothers Pizza turn his 2019 cars into a new kind of pizza in 2020?” – Tiongson

Before 2019, Elliott had an average starting position of 2.0 in his first three Daytona 500s. However, the son of Awesome Bill from Dawsonville started from the not-so-awesome 18th position, a dismal spot for Hendrick Motorsports standards at Daytona. Despite retiring early from crash damage, Elliott looks to back up his three wins from last season. Despite the Daytona disappointment, Elliott still had an upbeat Speedweeks, complete with his “za” excursion with Barstool Sports founder Dave Portnoy.

“For the second year in a row, HMS had good Daytona speed. Will it translate to other tracks in 2019?” – Eric Estepp, Out of the Groove

The Daytona 500 for Jones was quite the adventure. During the middle of the race, Jones dropped off the pace with a fuel pressure issue. Next, the Michigander had his deck lid ripped off in an 18 car crash. Jones followed that up with a Ryan Preece style move to avoid the spinning cars of William Byron and Jamie McMurray. Finally, the 2017 rookie of the year rallied to come home in the third position.

How did he make it through!? ? @erik_jones somehow avoided this late-race wreck on his way to a third-place finish in the #DAYTONA500. pic.twitter.com/gPCXy0l6jI

“People from Michigan like Florida this time of year.” – Dr. Mark Howell, Frontstretch

What a gnarly night #Daytona500 pic.twitter.com/bQu2Z1o8IZ

“Does he need to get his eyes checked?” – Kelly

The restrictor plate ace was a surprising non-factor in the 500. He will have to wait another year to pursue his first Harley J. Earl trophy. Yet, Keselowski has a mighty Roush-Yates Ford engine under the hood, so look for a strong start to the season from the 35-year-old.

.@keselowski used every bit of that No. 2 @DiscountTire Ford Mustang and put his all into today’s race. #DAYTONA500 | #NASCAR pic.twitter.com/8tkuRP2hhh

“Despite a tough Speedweeks for Keselowski, expect him to be contending for wins throughout the season” – Kobe Lambeth, Kobelambeth.com

Questions are still swirling around Truex and his new team. Will Truex and crew chief Cole Pearn still be the top duo in the garage every week? Will there be a power struggle at Joe Gibbs Racing between Busch and Truex? Can Truex race for wins every week with his new team? Truex will have the opportunity to answer these questions this weekend.

“After a low profile kind of Speedweeks, Martin Truex Jr will likely make sure his name sticks in your brain like a Carly Rae Jepsen song when he wins like three of the next five races.” – Tiongson

So, who lead the most laps in the Daytona 500? Was it Kyle Busch? How about Keselowski? Maybe Logano? Race winner Hamlin? Elliott? Let’s try DiBenedetto. Huh? The ninth-place qualifier quickly shot to the lead and lead 49 laps in the Great American Race. After an improbable sixth-place finish at Bristol Motor Speedway a few years ago, DiBenedetto arguably became NASCAR’s most popular underdog among the fans. With his heroic run with new team Leavine Family Racing, which is aligned with Joe Gibbs Racing, is it time to shred DiBenedetto’s underdog status?

That was the most amazing and heartbreaking day all at the same time. Thank you all so much for the support! I am so lucky to be a part of this team

“Led most laps, finished first in our hearts.” – Howell

“Wait, he once raced for BK Racing?” – Zach Gillispie, Frontstretch

Larson drove an absolutely destroyed race car to a seventh-place finish in the Great American Race. If you know Larson’s track record at Daytona, just let that sink in.

Underdogs who get good finishes are cool, but let's give credit to the big guys too when they can keep fighting and put a beautiful work of art like this into the 7th place! #AbsolutelyRelentless (via @LemWansleyIII) https://t.co/MMSHpfMMss #NASCAR pic.twitter.com/ErM9EHR1t6

“Kyle Larson trying to do well at Daytona is like trying to fit a square peg into a round hole.” – Estepp

Like DiBenedetto, Byron had an impressive Speedweeks, especially considering his track record. Byron led the second most laps behind DiBenedetto but was only able to score a finish that matched his age – 21st. Is Byron finally turning a corner to become a truly competitive racing driver? If Daytona was any indication, good things are ahead for the North Carolinian.

Not the finish we hoped for, but the #Axalta24 team showed speed, led 44 laps and ultimately finished the race scored 21st.

So much to be proud of and a lot to look forward to! ? pic.twitter.com/xTo0GDtTy5

“I’m guessing the student knows how to study. He looked phenomenal out there leading laps and has a chance to show more of it in his sophomore season.” – Jake Baskinger, Jake Baskinger on YouTube

“Ran up front for a while in a scheme designed by Sam Bass, but that drive ended with a Landon Cassill t-bone.” – Adam Cheek, Frontstretch

Note: The quotes in this article are fictional.

1. Brad Keselowski: Keselowski fought off the effects of a stomach bug to win the race at Atlanta.

“The race was called the ‘Folds Of Honor Quik Trip 500,” Keselowski said. “Trust me, with this stomach issue, I made a lot a ‘Quik Trips.’”

2. Kyle Busch: Busch finished sixth at Atlanta after starting at the back of the field.

“Give Brad Keselowski credit for toughing out the win despite his tummy troubles,” Busch said. “It must be contagious, because now I want the chance to prove that I can win with an illness. In other words, Brad Keselowski makes me sick.”

“The surface at Atlanta Motor Speedway is quite abrasive,” Harvick said. “It really does a number on your tires. A fan suggested I discuss these particular issues on a web site devoted to extreme tire wear issues called ‘Grindr.’ Well, it turns out this site is not devoted to tires at all.”

“Ricky Stenhouse Jr. really held me up,” Truex said. “And I’m beyond frustrated. He was a lap down. Of course, it’s not the first time Ricky has held someone back. Danica Patrick dumped him and upgraded to Aaron Rodgers!”

5. Denny Hamlin: Hamlin finished 11th at Atlanta one week after winning the Daytona 500.

“Despite finishing outside the top 10,” Hamlin said, “I’m still atop the Monster Energy Cup points standings. So basically, ‘My Win At Daytona Has Kept Relevant,’ which may very well be the title of Trevor Bayne’s autobiography.”

6. Kyle Larson: Larson led a race-high 142 laps, but a late pit lane speeding penalty spoiled his chances for the win. He finished 12th and is fourth in the Monster Energy Cup points standings.

7. Joey Logano: Logano struggled to a 23rd at Atlanta as Penske Racing teammate Brad Keselowski captured the win, his 60th for Penske.

“I’m really proud of Brad,” Logano said. “That was a gutsy effort. I bet Brad was exhausted afterwards. In fact, I’m sure his first words were, ‘I’m pooped.’”

8. Erik Jones: Jones took seventh at Atlanta and has two top-10 finishes to start the season. He is seventh in the Monster Energy Cup points standings.

“I think everyone is happy with NASCAR’s new rules package,” Busch said. “And if you’d like to quote me saying ‘Impressive package,’ please do so in context.”

10. Aric Almirola: Almirola started on the pole and finished eighth at Atlanta.