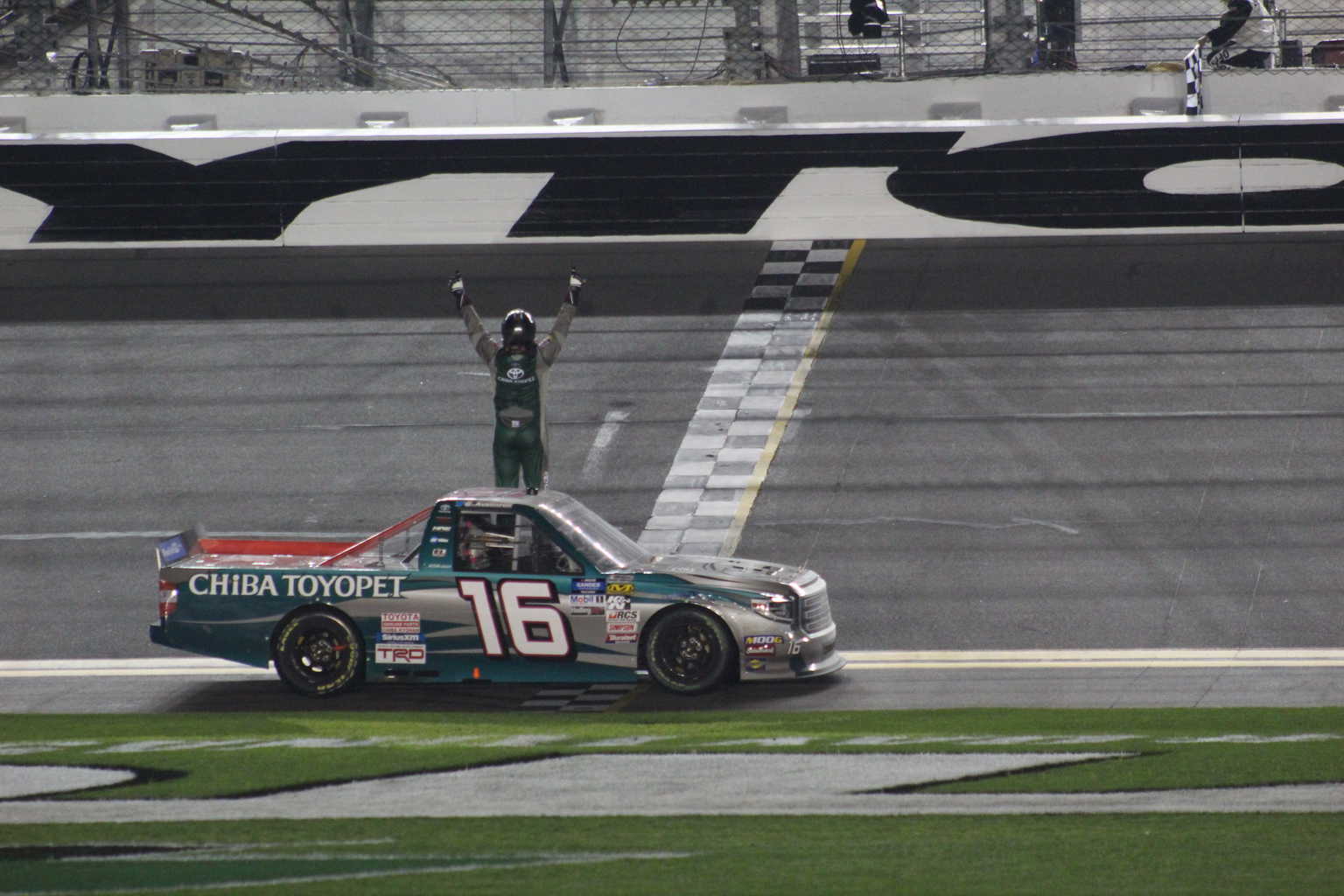 When the dust settled over the Gander Outdoors Truck Series season-opener at Daytona International Speedway, just nine trucks were running. Meanwhile, Austin Hill emerged victorious for the first time in his career in his debut race with Hattori Racing Enterprises.

Quite the Victory Lane to park it in! ?@_AustinHill | #NextEra250 pic.twitter.com/nwk0ZE3Nxc

That’s right, last year’s championship team that dropped its driver due to a lack of funding has already found Victory Lane with its newest driver. For Hill, it was a busy offseason, as he made the move from Young’s Motorsports. But, unfortunately, not everyone looked toward the 2019 season with the same optimism of the driver headed into his second full-time campaign in top-notch equipment.

Nothing shows how driver talent matters less than financial backing than Hattori Racing’s announcement that Brett Moffitt has been replaced by Austin Hill.

The perception is simple: Hill bought his ride. It’s easy to see where some would assume that’s the case. After all, you have the defending series champion Brett Moffitt who won six races suddenly released from his team because funding wasn’t available to keep him for the next year. Compare that to Hill, who had a single top-five finish in his first full-time season, and the numbers simply don’t add up.

But in reality, the climate that NASCAR, as a whole, faces these days revolves around funding, Most of the time, it’s the drivers that need to do the legwork, especially in the lower series. Keep in mind that Moffitt’s championship campaign was in danger of not running to completion with several unsold races.

That’s not to say that Hill didn’t earn his shot with HRE. Remember that Young’s Motorsports isn’t exactly a top-tier team by any stretch. In fact, Hill scored a career-best finish for himself and the organization with a fifth-place run at Texas Motor Speedway last fall, and that race was fresh off of qualifying seventh and finishing 20th at Martinsville Speedway the week before.

“Man, I just can’t tell you how proud I am our team,” Tyler Young, general manager of Young’s Motorsports, said at the time. “We had three trucks in the race, and I’m proud of our Young’s Motorsports team for being able to put competitive equipment out every race. Austin has been on a roll the last month or so and I think everyone has seen how our team’s dedication and commitment is really starting to pay off.

“It takes a lot of people to make this deal work, and without them, none of this would be possible. We’ll keep focused and keep making gains forward.”

Fast forward to Daytona ,and Hill was among the final nine trucks running on the track. Sure, he was fortunate to have avoided the massive amount of carnage that had sidelined more than two-thirds of the field and that contributed to the trip to Victory Lane. But even before a large majority of the trucks were loaded up in pieces, Hill ran right around the top five and top 10 for much of the race.

Beyond that, Grant Enfinger did not go down without a fight and forced Hill to block high and low as the field worked its way toward the checkered flag.

But when the race was over? He was just a normal dad and a family man.

Disney world with the kids today! Thank you everyone for all the kind messages. I will try my best to get back to you guys soon! This has been such an incredible day with my family celebrating our big win at @DISupdates !! ?

It remains to be seen what Hill and HRE will manage to do with the remainder of the schedule, but barring a major disaster, it’s likely the organization is headed to its second playoff berth in as many seasons. And it’s completely realistic to expect to see that No. 16 Toyota in Victory Lane a few more times before the year is up.

“The number one goal is to win the championship, so we’re locked in now. Kind of takes a weight off of your shoulders going into Atlanta,” Hill said. “We get to go have fun now.

In this case, perception isn’t reality. Even though Hill brought the funding with him to race with a championship organization, his reality is that he is a talented competitor who has previously outperformed the equipment he was in. Now, Hill has that opportunity to shine and show the NASCAR world what kind of driver he really is.

“Nothing shows how driver talent matters less than financial backing …”
It is interesting, to me, that several Nascar fans/writers think the racing world should be meritocratic, when, essentially, the rest of the world is not. A lot of people were first exposed to non-meritocracy in grade school, where kids with higher income parents tended to live in better neighborhoods, lived in nicer houses, and were transported in nicer vehicles than were kids with lower income parents – the differences in surroundings was not based on the merits of the kids.
There have always been, and always will be, talented young people (budding athletes, singers, writers, musicians, professionals, etc) who never realized their potential because their skill development lacked the required capital, time, environment, or whatever.

maybe the problem isn’t only that it is that way, rather its trying to pretend its not.

Which is the reason for NA$CAR drive for diversity. The days of learning mechanics, welding and driving being enough to get to the top of any racing league are long since gone. Ah technology.

Ah yes the drive for diversity. Let’s not have true equality . You get help and funding because of your sex or skin color.
Every one screams for equality, till they actually get treated as equal.

Just curious and I can’t find an answer.

I know that last year Hattori often ran the TRD engine rather than the NT1. What engine were they running for Daytona? I wish NASCAR would show the engine on the entry list along with the body style.

If Nascar lets Ilmor provide an alternate engine for economic reasons or whatever, it should require all the teams to use it. It certainly isn’t fair to allow KBR to run TRD engines because they have more resources. Kyle had to have much more horsepower than everyone else to run like he did at Atlanta!! Unfair!!