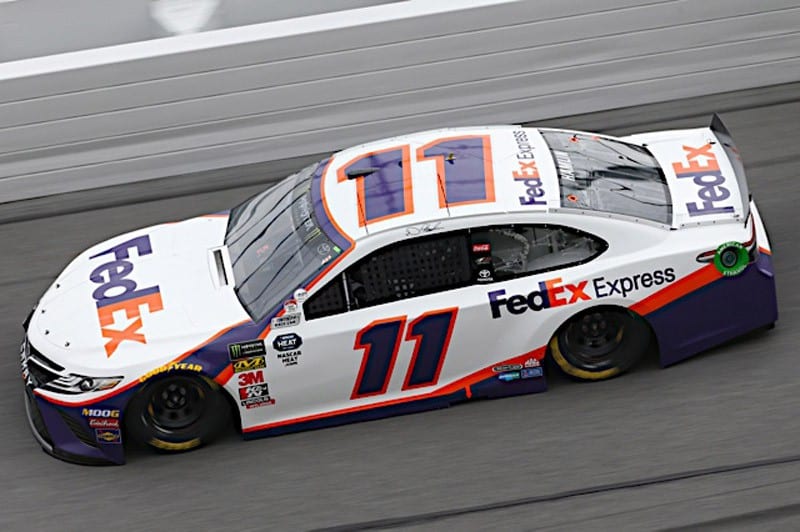 It’s been a good week to be Denny Hamlin.

The Virginian has spent the past few days soaking the glitz and glamour of a Daytona 500 victory. Hamlin added to his legacy with a second appearance on the Harley J. Earl trophy last Sunday, bolstering his NASCAR Hall of Fame bid in the process. His winless streak of 2018 suddenly feels like a distant memory, and a playoff berth for the fall is already in hand.

With an early win under his belt, Hamlin can focus on securing race wins and accomplishing the one thing that’s avoided him over the years – a Monster Energy NASCAR Cup Series championship.

All told, Hamlin’s in a great position.

But recent history shows that it might not bode well for his championship hopes this fall.

A win in the Great American Race has always been considered one of NASCAR’s ultimate accomplishments, but since 2014 the event has gained even more importance. In the modern win-and-you’re-in playoff era, a February triumph in Daytona Beach is the quickest way to lock in a postseason berth.

Dale Earnhardt Jr. accomplished the feat in 2014, assuring previously worried members of JR Nation that he would be a playoff contender to open the year. Joey Logano earned his first Daytona International Speedway win in 2015, and Hamlin managed the same with a photo finish victory in 2016. The past two years have seen Kurt Busch and Austin Dillon score surprising wins with late-race drama to secure their place in the field of 16.

The performances have been career-changing for most of the winners and resume-boosting for each of them.

But they haven’t led to championship opportunities.

In the five seasons since the creation of the modern elimination playoff, no Daytona 500 champion has made it to the Championship 4 and contended for a title at Homestead-Miami Speedway.

Earnhardt’s promising 2014 run saw him enter the playoffs as a dark horse to win his first Cup Series title. But the two-time Xfinity Series champion’s postseason hopes flamed out in the Round of 12, when he had an average finish of 30th en route to an early exit. Earnhardt rebounded to win the opening race of the Round of 8 at Martinsville Speedway, but the triumph was little more than a feel-good moment after his elimination.

Logano seemed poised to take the 2015 title. The Connecticut native won a series-best six races and even swept the Round of 12 with a trio of emphatic wins. But an enemy made along the way came back to haunt him, as Matt Kenseth purposefully crashed Logano at Martinsville to effectively kill his playoff push.

Hamlin made the Round of 8 with a quiet run in 2016 but fell short of advancing to his second Championship 4. He would prove to be the last strong contender among Daytona 500 winners in recent years, with Busch and Dillon each finishing outside of the top 10 in their postseason efforts.

Even before the current era, Daytona 500 success rarely translated to championship runs. The only driver in the past 20 years to win the Great American Race and the championship in the same season has been Jimmie Johnson, who accomplished the feat in both 2006 and 2013.

To find a driver that won both before Johnson you have to go back to 1997, when Jeff Gordon claimed his first Daytona 500 and second series championship.

Based on those rudimentary statistics, it’s safe to assume Hamlin won’t drive to his first Cup Series title this year. But then again, if anyone is positioned to reverse the trend and claim the championship after a Daytona win, it’s Hamlin.

As has been well documented by the various scribes discussing his Daytona win, the 2018 season wasn’t kind to Hamlin. It was the Virginian’s first winless season since he made the leap to full-time Cup competition in 2006.

However, even in one of his worst years, the Joe Gibbs Racing ace managed 10 top fives, four poles and a playoff appearance.

Hamlin has made a name for himself as one of NASCAR’s consistent contenders over the past 14 years. The 38-year-old’s 32 wins tie him with 1999 Cup champion Dale Jarrett on the all-time wins list. Save for the 2013 season that saw him leave the cockpit with a back injury, Hamlin has finished no worse than 12th in every season of his Cup career.

Since the advent of the elimination playoff, Hamlin has been a constant contender. He’s made the Round of 12 in four of the five years, survived to the Round of 8 three times and even made a Championship 4 appearance in 2014.

Hamlin doesn’t rattle off wins with reckless abandon like teammate Kyle Busch, but he’s a consistent presence at the front of the field. That gives him a chance to make a playoff run on any year, particularly if the No. 11 team gets hot at the right time.

Such a run would do wonders for Hamlin’s career.

The veteran has accomplished multiple big victories during his time in the sport — Daytona, Martinsville, Talladega Superspeedway and the Bristol Motor Speedway night race among them. But there are still some that question his legitimacy as a future Hall of Famer, something this site debated earlier this week.

A championship would put and end to the majority of that debate. It would place Hamlin alongside Jarrett, Logano, Kenseth, Bobby Labonte and other one-time title winners. He already has a resume that rivals any of theirs in wins, trailing just Kenseth (39) among the three.

Hamlin already has a Hall of Fame resume. All he needs is a title.

Recent history may show that it’s unlikely to happen this year, but he’s positioned as well as anyone to reverse the trend.

Oh dear God. Denny has choked for many a year. Even had a sports head shrink work with him, if memory serves. Truth be told he has been around for a long time, and yeah he won races, but he always caved. Sorry why is so many people hyping his 2 win at Daytona when hell Mikey Waltrip did it too! Oh is it the JD drama? “I did it for JD”? Shades of Sherry, imo. Toys luv the drama and BRIAN. I swear he is writing this scripted nonsense. Is he back? The Daytona Pole and Daytona 500 drama, Homestead is his passion! Besides the other..ahem..stuff! Daytona for some time I wondered why is this the crown jewel unless somebody flies away with it. It is a crapshoot and full on survivor. The proof is always what is done with regular season.