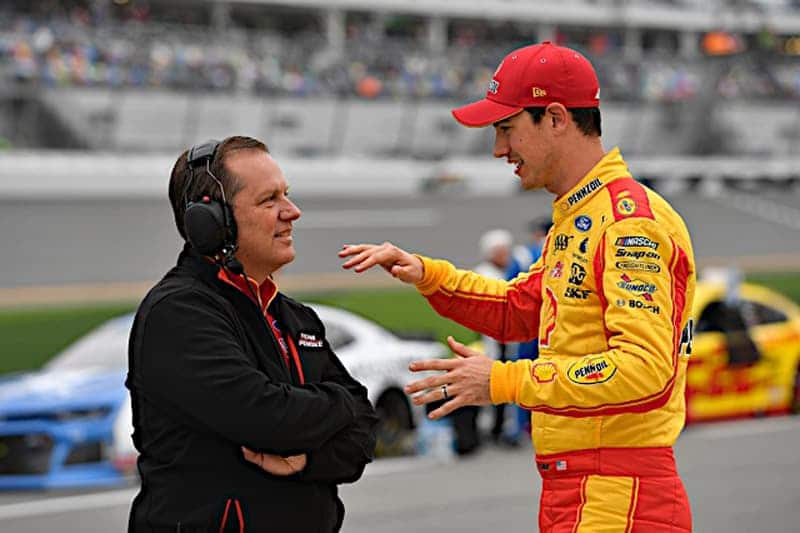 Restrictor plate racing has always been about your dance partner. Is your partner fast? Will they stick with you at the right time? Do you have good chemistry?

Joey Logano was upset with who he thought was his dance partner in the closing laps of the Daytona 500, Michael McDowell, for not pushing him to contend for the victory. Instead, the No. 34 of McDowell opted to choose the high lane and push Kyle Busch. The three of them wound up stalling out, allowing Denny Hamlin to cruise to the victory.

“I thought with the Blue Oval behind (Busch) that the Ford would come with me,” Logano said of McDowell. “Typically, you kind of expect manufacturers to work together like the Toyotas do or the Chevys do, so I was expecting that as well coming to the checkered flag. I was very surprised.”

I hate to break it to you, champ. But sometimes, the manufacturer on the front of the nose doesn’t necessarily agree with the brain in the cockpit, especially on the last lap of the biggest race of the Monster Energy NASCAR Cup Series season.

McDowell’s main argument against the No. 22’s was simple: he’s trying to do everything he can to get a win for his team, not Logano’s. In that split second, he thought going with the No. 18 of Busch would give him a better chance of winning. Right or wrong, that’s what he thought and did.

“I would’ve loved to have worked with Joey, but he was moving left to right,” McDowell said. “The [No.] 18 had a big run, and Joey had a lot of damage. The back of his car was completely smashed — no rear bumper, parachute hanging out of it. Joey wasn’t going to win the race. I wanted to put myself in the best position to win a race.”

After the defending champion came over to McDowell and voiced his displeasure, he brought up a point that, frankly, doesn’t get mentioned but everybody kind of knows.

That point was illustrated beautifully by Bubba Wallace‘s spotter, Freddie Kraft, on Door Bumper Clear this week (around the 1:40 mark).

The Door Bumper Clear gang has the ?hot? take on the Logano vs McDowell situation that occurred during the #Daytona500

“Joey is 1,000 percent not pushing Michael McDowell … we (the No. 14) know our car is faster than his car, so why would we ride around behind a guy that’s slower than us?” Clint Bowyer‘s spotter Brett Griffin added. Further proving the point: if it’s convenient for you, great. If not, well, sucks to suck.

Penske or SHR cars aren’t going to go out of their way to draft with a Front Row or Roush car. They’re sticking with themselves, the bigwigs, because they know what to expect. They’re always quick.

“That’s what’s so frustrating,” McDowell said. “You got guys that are like, ‘hey, why didn’t you go with me?’ Because every time I’m in the front, you shook me out, so what makes you think I’m going to push you to a win when you leave me high and dry the whole entire day? … I just told him (Logano) that my team doesn’t pay me to push Joey Logano to a win. At 200 mph, I made a split-second decision on what was the fastest car and who had the best shot of winning the race, and that’s where I went. And the Fords weren’t that friendly to me this weekend.”

Here’s the bottom line, folks. If you aren’t with a powerhouse team, haven’t proven yourself beforehand and are deemed slower than the rest, ain’t nobody gonna work with you. That’s just how it is and how it always has been.

With the Daytona 500 being the last restrictor plate race for the foreseeable future, one could think change is on the horizon with the introduction of the tapered spacer.

Sorry to burst your bubble, but nothing is going to change. The speeds may be different and the cars may look a tad different, but the partnerships will be the same. Bigwigs with bigwigs, smaller teams with smaller teams.

To be clear: I don’t fault Logano for being mad at the situation. Any other driver in his position would be saying the same thing. But I also don’t fault McDowell for standing his ground. It’s just a disagreement that happened to occur under the biggest microscope during the biggest race of the season.

Well the way I look it at Mikey had a better chance with going with Logano, it is not like Joey is a backmarker like Mikey who doesn’t know what he is doing up front in closing situations. He has proven he knows how to get the deal done. Mikey has not. I don’t see a win for him in CUP. Also Ford has invested time and money into that team, not Toyota. I am sure behind the scenes TEAM PENSKE and SHR has offered help one way or other at some point, not to mention Yates engines. Did he really think he was going to get help from the TOYS? Come on. Also Fords Plate program is pretty solid with their cars sticking together and once out running the competition they are expected to race among themselves. Mikey did not give himself or Logano that chance. We will never know if he could have been a Daytona 500 winner. That would have been awesome for him and his team. Like it or not the one of the nasty beasts of the crapshoot plate racing IS TEAMWORK.

Michael McDowell let Logano know how it feels when the shoes on the other foot.

Ah, those pesky emotions that don’t mean jack. “Joey and Fords were mean to me” Lol. Well, he had a chance and he held his breath and got 5th place (or whatever it was) How did that work out for MIKEY? Yeah HE SHOWED LOGANO!!! Too funny. To me his mindset post race interview saying “his job is not to help Logano win races”. Duh, of course not! Not the mindset I would think someone being a potential winner of the DAYTONA 500 mindset would have. His statements FIRST and FOREMOST clearly thinks of himself as an accessory to someone else. Weak, imo. He could have done something with Joey and I would have cheered if he found himself in VLANE.