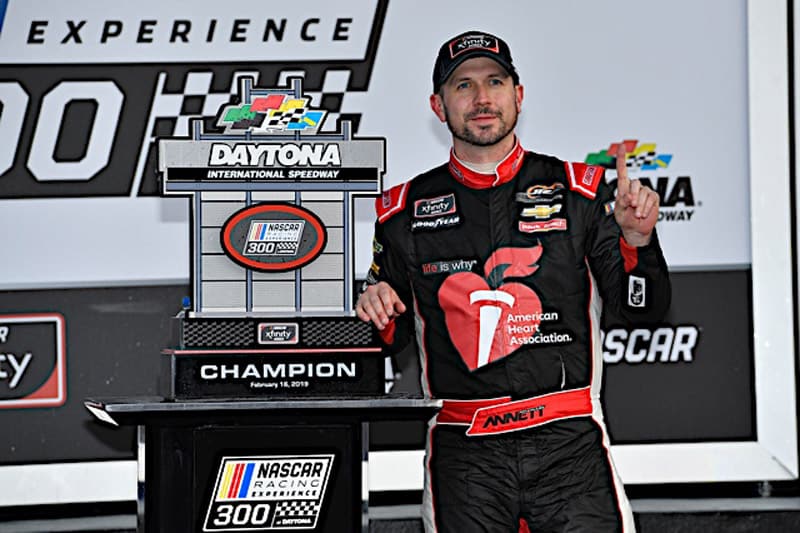 Kyle Busch seemed a bit miffed that he wasn’t able to challenge his teammate for the win in the Daytona 500. Do you think a driver should respect the need for a team car to win a race. or should they go for it, knowing that it could cost both drivers the win?

Zach Gillispie: I have always agreed with the philosophy that the most important part of the racing is the win — not the points, playoffs, bonuses, championships, etc. You race to win. If you are refusing to race another driver (even if it’s a teammate) for a win, are you really even doing your job? Driver should race their teammates like their rivals. This philosophy of big team racing has utterly skewed the main objective of racing. If big teams are preventing a driver from aggressively racing for a win, then the mega-team structure is the problem. If winning is not the objective, you are simply not racing. Period.

Alex Timms: When it’s the biggest race of the year, with the most prestige, you need to do anything you can do to win. Sticking behind your teammate doesn’t always mean you’ll hold off an aggressive driver like Joey Logano from winning. You need to go down swinging, especially if you have a career like Kyle Busch’s and are lacking that one big victory on your mantle. Nobody remembers the teammate who finished second.

Amy Henderson: They should respect the need for a team car to win until the closing laps.  Then it’s any driver for themselves. That said, Busch was at a disadvantage as soon as he lost the lead to Denny Hamlin for the final restart. It’s become almost as hard to pass at the superspeedways as anywhere else, so the leader has a huge advantage (it didn’t used to be that way; in fact, the last place a driver wanted to be at the white flag was in front, because it was pretty likely they weren’t going to finish there). It wasn’t that Busch didn’t try to pass Hamlin; he couldn’t.  His best bet was to do exactly what he did — get in behind Hamlin on the restart and try to push him to enough of a lead that he could then make a move.  It’s happened before but didn’t work out Sunday.

Wesley Coburn: It depends on the series, the team and the race involved. In Formula 1, team orders are paramount, which feels wrong. If it were the playoffs or the championship, maybe that would be OK but it’s much grayer. On the last lap of the Daytona 500, it’s everybody for themselves.

How much should having the same manufacturer matter when it comes to helping one driver over another?

Adam Cheek: It should matter to a degree; at the end of the day, the biggest teams in NASCAR are the manufacturers’ drivers. During the race, it should matter when the field is jockeying for position, but if it’s the last lap, the free-for-all mentality would probably still apply regardless of manufacturer.

Coburn: Strength in numbers and pride in community accomplishments are both very good ingredients for success — in this case, winning races and/or titles. I don’t mind teams of the same manufacturers working together; it makes things more interesting.

Henderson: Earlier in the race, it’s to their advantage for drivers to work together, work out pit strategy, draft, etc. But when it comes down to racing for the win? It’s every driver’s responsibility to try to win for their team, and that goes double for teams like Front Row Motorsports that don’t have factory support at the level of those like Team Penske.  Why should Michael McDowell have helped Logano, whose team already has more resources than his team can dream of?  Logano was way out of line complaining.  Had the tables been turned, he wouldn’t have helped McDowell, you can bet on that. So it really boils down to sour grapes that Logano couldn’t get a run.

Gillispie: As a driver, you should take pride representing your manufacturer. Logano was ticked that fellow Ford driver McDowell did not push him to the win on Sunday. But everyone needs to take a step back and look at what is happening. With the big team and manufacturer racing dominating our sport right now, one must wonder how important the individual driver is. The driver is almost not allowed to race for themselves, a principle on which NASCAR was founded. I agree with McDowell; he was doing what he thought was best for him to grab the win. That’s old-school NASCAR, unlike today when the big guns are the ones who truly matter in the whole grand scheme of things when it comes to winning. In the 1990s, Dale Earnhardt, Jeff Gordon, Rusty Wallace, Dale Jarrett and Ernie Irvan were the ones who matter when it comes to winning. So, manufacturers and big teams: shut up and let the drivers race.

Timms: Ford definitely has the strongest manufactures alliance around, but as we saw between McDowell, Logano and Clint Bowyer, maybe it’s more of a Penske-Stewart-Haas Racing alliance. Helping get a Ford to Victory Lane when you don’t have a shot at the win should be key unless it hinders your chance at getting the best finish possible. When it’s two laps to go, all manufacturers are equal in checkered flags and trophies.

Matt DiBenedetto raised a lot of eyebrows as he led the most laps at Daytona International Speedway. Is this a case of restrictor plates evening out the field, or will this team be just as competitive in the coming weeks?

Gillispie: The saying goes that anyone who starts a restrictor plate race has a chance to win it. Matt DiBenedetto is a great example of that. I’m not trying to say that DiBenedetto won’t have a great season, just that it is too early to tell.

Henderson: It’s a combination. DiBenedetto has shown he’s a strong superspeedway racer even in the No. 32. But how the team’s success Sunday will translate is still up for discussion.  Leavine Family Racing isn’t paying what Furniture Row Racing did for its alliance with Joe Gibbs Racing, so don’t expect that level of competition, at least not yet. Still, the equipment is a far sight better than a year ago, and the team now has a talented young driver with the desire to prove himself and do what it takes to win. There are a lot of teams fighting for top-20 points finishes these days even if they aren’t playoff-ready, but this team could very well be among them come the end of the year.  That would be a significant step forward, and expect some top-15 runs along the way. Just don’t expect miracles.

Timms: It’s hard to say without seeing the No. 95 on a non-restrictor plate track yet, but it definitely seemed to have speed leading the pack Sunday. The team will be competitive all year, and with this new package creating more pack racing, the organization has a legitimate chance to be a playoffs team this year.

Cheek: DiBenedetto has shown that he can get the most out of what’s given to him, and what he’ll have at LFR is even better than when it was a Chevrolet team last year. DiBenedetto is a promising driver, and with the JGR/Toyota alliance, the No. 95 team should expect improving finishes as the year goes on. He’ll certainly be a threat at the other superspeedway races.

Coburn: He’s a great restrictor plate racer, and LFR s a strong superspeedway team. He’ll be just as competitive in July and at both Talladega Superspeedway races. The JGR alliance will pay off big later in the season and those to come, but there will be some growing pains. By the end of the year, the No. 95 should be in the top 20, sometimes even the top 15.

Austin Hill and Michael Annett each scored their first career wins in their respective opening races at Daytona. Is either a championship threat?

Timms: Austin Hill is for sure. He drives the championship truck from a season ago in the Gander Outdoors Truck Series and has the drive and talent to win, and he proved he can keep his stuff clean until it’s time to go. Michael Annett’s win is a product of restrictor plate racing. He hasn’t been even close to competitive on any other track in his two years with JR Motorsports. Playoffs threat? Yes. Championship threat? No way.

Gillispie: Neither driver is a championship caliber driver just yet. This is Hill’s first time in competitive equipment. Annett has a had a track record of underwhelming performances. Once the season unfolds, Hill can be a championship threat, but it’s too early to tell.

Coburn: Hill probably is, given Hattori Racing Enterprises’ success last year with Brett Moffitt and a relatively thinned-out field of competitors in the Truck Series (Justin Haley and Noah Gragson promoted to Xfinity, GMS Racing downsizing). Annett, no, because of his age and status within the JRM pecking order. Justin Allgaier is the top dog there, Gragson has tons of potential and John Hunter Nemechek at alliance partner GMS will all be higher priorities for Chevrolet if anyone can derail Christopher Bell‘s path to the title.

Henderson: Hill, maybe.  He has a very good team behind him, better than it got credit for last year, and he certainly brought money to the table.  The team won a title last year without that monetary boost from the driver, so Hill has to be in the conversation until he proves otherwise. It’s hard to gauge his talent level in the series because he’s never had proven equipment. Annett?  No. It took him more than 200 races to win one, most of those starts came in top equipment, and the one was a restrictor plate equalizer race. He brings the money, sure, and he also has a top team behind him, but at the heightened level of competition in the Xfinity Series, he doesn’t have the talent to pull off the type of playoff run that paves the way to a title in that series.

Cheek: Hill is a good possibility, as Hattori has great equipment and can bring out the best in a driver. Hill showed off some great moves at Daytona and could be a threat to win more races this season. Annett will not be; he hasn’t been a title threat before, and JRM will likely prioritize its other two racers.

Drivers are employees of the team, the most visible employees, but employees nevertheless. The team dictates what happens.