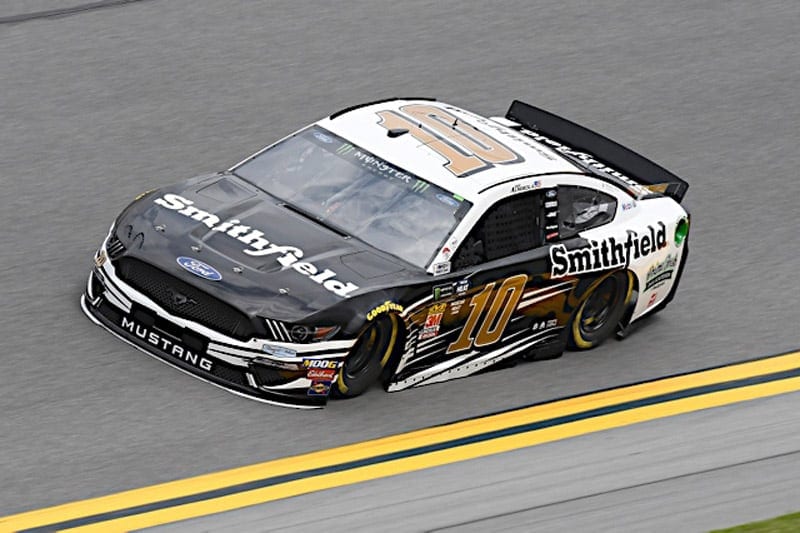 Aric Almirola scored his first pole since 2012 in the Monster Energy NASCAR Cup Series on Friday evening at the Atlanta Motor Speedway for this weekend’s race.  He posted a lap speed of 181.473 mph and will start beside Ricky Stenhouse Jr.

Almirola not only scored his first pole in seven years, but it is the first for the new Ford Mustang, as they occupied four of the top five spots in qualifying as well.  Stenhouse Jr.’s 2nd place effort is his best qualifying run since starting on the pole at Talladega in May of 2017.

Rounding out the top five qualifiers were Clint Bowyer (180.410 mph) in third, Denny Hamlin (180.328 mph) in fourth, and Daniel Suarez (180.216 mph) in fifth.  Kyle Busch, Kyle Larson, Kurt Busch, Martin Truex Jr. and Austin Dillon finished out the top 10. Three of the four Stewart-Haas Racing drivers were amongst the top five, but the most notable that was absent was Kevin Harvick, who qualified 18th.

Harvick reported a steering problem all day and never discovered what the exact issue was, and it continued into qualifying on Friday evening.  The defending race winner will have to fight his way through the field on Sunday to duplicate his dominating performance from last season.

Some notables that were outside the top 20 include Chase Elliott in 22nd, Ryan Blaney in 25th, defending champion Joey Logano in 26th, and rookie Daniel Hemric in 27th.  It is unknown how much track position will matter on Sunday, but all of these drivers will have to come from deep in the field.

All 37 cars entered made a lap during the session.  The first practice on Saturday begins at Noon ET with coverage on FoxSports 1.