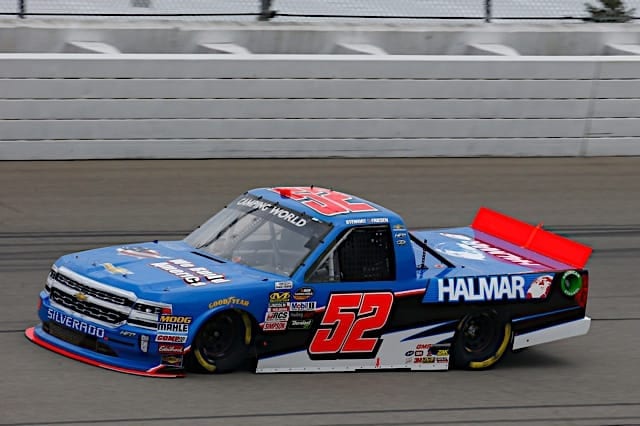 The Gander Outdoor Truck Series held two practice sessions on Friday afternoon in preparation for Saturday evening’s Ultimate Tailgating 200 at the Atlanta Motor Speedway, the second event of the 2019 season.

Stewart Friesen was fastest during the first session with a speed of 177.204 mph.  Friesen is looking for his first career win in the series this weekend, after being so close on many occasions to accomplishing that feat last season.  Rookie Sheldon Creed was second quickest with a lap speed of 176.876 mph.  Creed posted a top-two time in the second session as well, and will look for a solid qualifying effort on Saturday morning.

Rounding out the top five in the session were Matt Crafton, Brett Moffitt, and Johnny Sauter.  Kyle Busch, Todd Gilliland, Ross Chastain, Harrison Burton and Tyler Dippel ran top-10 speeds in the opening session. Daytona winner Austin Hill did not practice due to a transmission issue, but the team later fixed the issue and got up to speed in final practice.

Ben Rhodes topped the second session with a time of 31.194 (177.726 mph).  Rhodes is in his second race working with new crew chief Matt Noyce, and will look for his third career win Saturday evening. Creed nabbed second spot again, and Monster Energy NASCAR Cup Series star Kyle Busch is the lone Cup driver in the field and posted the third quickest time of the second session.