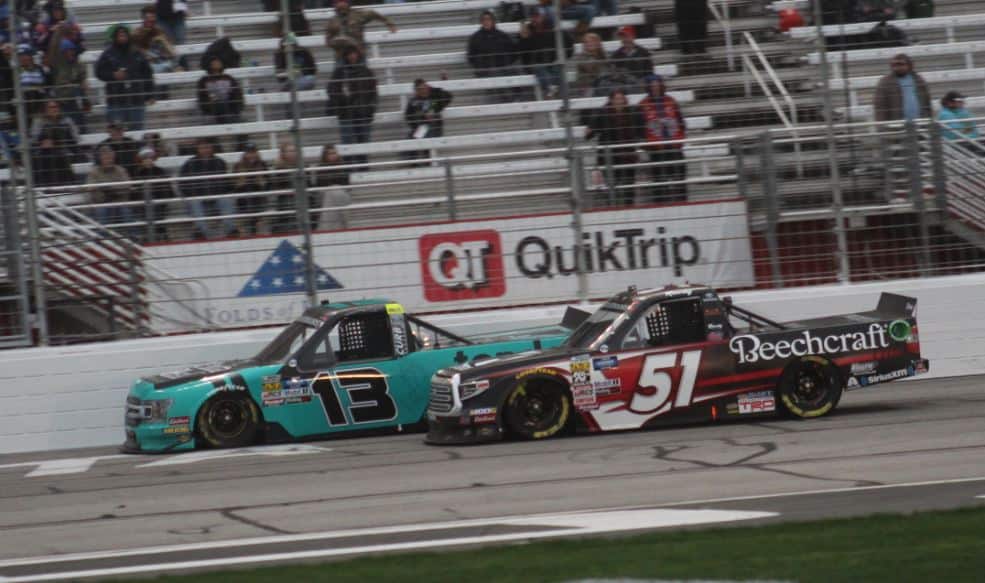 Running 1-2-3-4 at one point in the Ultimate Tailgating 200, it was Sauter who ended the night highest in the four-truck team, finishing second in his No. 13 Ford.

It was the last restart that gave him one final shot. But there wasn’t enough.

“I felt like I got a good launch, too, on the last restart,” Sauter said. “I was pushing [Busch] and I was kind of hoping he would spin out [laughs] as hard as I was pushing him. He did a great job of blocking just enough to stall me out.”

Returning to Thorsport for the first time since 2015, Sauter is thrilled to have the reunion already showing potential.

“It’s almost a blessing in disguise,” he said. “It’s fun. I got a lot of good teammates and we have a lot of good people. If we all work together, the sky’s the limit.

“I saw their speed at the end of last year. Obviously, as a racecar driver, you’re paying attention to what’s going on around you and you’re working on your stuff. I’m just so proud of everybody. So much work went one since finding out I was going to be back.

“I got a lot of experienced guys who have won races. I feel we’re going to be racing each other for wins every week.”

However, the sting of losing a race will be on Sauter’s mind until the series heads to Las Vegas Motor Speedway next weekend.

“Tonight is just a bummer,” he concluded. “I might feel differently after I go home and watch the replays of what I could have done. Kyle did what he had to do to win the race.”