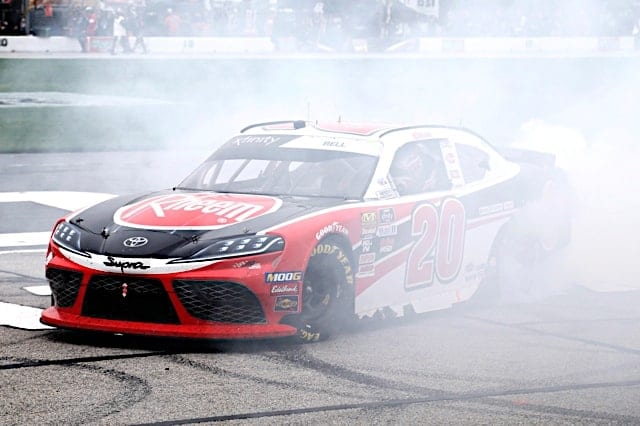 Christopher Bell dominated the 2019 Rinnai 250 at Atlanta Motor Speedway. The 24-year-old from Norman, Okla., won his ninth career NASCAR Xfinity Series race. He swept both stages and held off Cole Custer in a late shootout to win the Rinnai 250.

Bell became the first driver to win in Toyota’s Supra.

“That’s really, really big, and it all boils down to the fact that you don’t get to be the first-time winner very often,” Bell said. “There’s a very good possibility that Kyle [Busch]’s is going to win one of the next three, and I beat him to Victory Lane, so I’m all smiles right now.”

The first two stages were caution-free. Bell led all the laps in Stage No. 1 and he won his first stage this season. During that stage, he lapped nearly half the field. Bell continued his domination by winning the second stage as well.

In the third stage, Bell had the fastest car in the field, holding off several attempts by Tyler Reddick. Despite a slow green flag pit stop by his pit crew, Bell quickly drove his No. 20 Joe Gibbs Racing Toyota back to the front of the field.

On lap 155, John Hunter Nemechek spun out, and the caution flag flew. All the lead lap cars pitted for tires. The Joe Gibbs Racing pit crew made up for their slower stop, and Bell restarted up front. The race ended with a three-lap shootout. Bell held off Custer’s charge to win.

“I had a run there that second-to-last lap, and then he took my line that last lap,” Custer said.

Bell led 142 of the 163 laps, and he earned the maximum 60 driver points. 31 of the 37 drivers finished the race, and with only three cautions, only 14 drivers finished the race on the lead lap. Justin Haley (eighth) and Noah Gragson (ninth) were the only two rookies who finished on the lead lap. At the treacherous 1.54-mile track in Hampton, GA, the rookie drivers endured a rained-out qualifying, cool temperatures, and all six rookies completed the Rinnai 250.

Despite the runaway performance, Bell still sees room for improvement.

“I felt like I wanted to be dominant, obviously, winning is good, but I wanted to be really good. And we were good until late in the race,” Bell said. “If there were any [Monster Energy NASCAR] Cup Series drivers there at the end, then we might’ve been beaten. I’ll have to get better as a race car driver.”

This race was as bad as last week’s race at Daytona. It’s gonna be a long season…