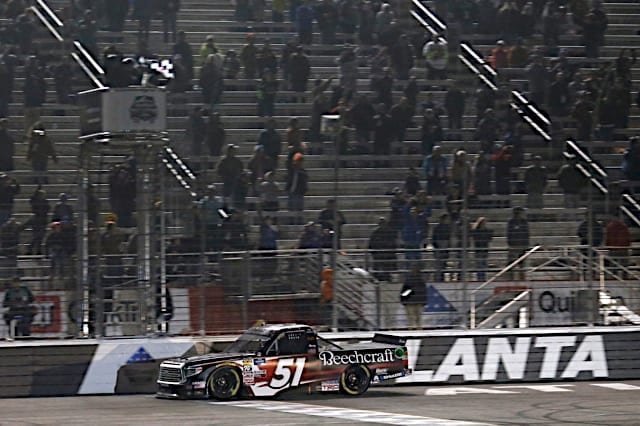 Nothing could stop Kyle Busch from winning the 2019 Ultimate Tailgating 200 at Atlanta Motor Speedway. No amount of cold, no type of weather, no lack of qualifying, and none of the 31 other starters could do it. Busch won the Ultimate Tailgating 200 at Atlanta Motor Speedway Saturday evening (Feb. 23) to become the winningest driver in NASCAR Gander Outdoors Truck Series history. Busch won his 52nd career Truck Series race, breaking the tie with NASCAR Hall of Famer Ron Hornaday Jr. for sole possession of first place.

“We’re just here to go out and compete, and win. And obviously everything that’s tallied up over the years has gotten us to this point. We just continue to try our best, and today, it was really, really good.”

Of Kyle Busch’s 52 career Truck Series wins, 36 of them have come in his own equipment for Kyle Busch Motorsports. He earned his first 16 victories driving the No. 51 Billy Ballew Motorsports Toyota, many of those in a truck painted similar to Rowdy Burns’ Exxon-sponsored No. 51 from the film Days of Thunder. Appropriately, Busch won the Ultimate Tailgating 200 driving No. 51 Toyota with Billy Ballew in attendance. Michael Waltrip described this moment as “one which we knew was coming.”

In his Victory Lane celebration, Busch described Kyle Busch Motorsports as phenomenal. He noted it was to cool to see the No. 18 Toyota [of Harrison Burton] racing up front there. Busch wished NASCAR would’ve ended the race during the red flag period due to rain because Burton was in second at the time. Because Burton restarted on the outside lane, he fell back a few positions, finishing in eighth. Once he won the race, Busch celebrated.

Busch’s record-breaking accomplishment may be insurmountable. Vince Welch noted during FOX Sports 1’s broadcast of the race that he does not think anyone will ever break Busch’s record for career NASCAR Truck Series victories. While that statement is debatable, the stats show that no active drivers in the Gander Outdoors Truck Series have even half of Busch’s win total.

Due to the cancellation of qualifying earlier in the day, Busch began the Ultimate Tailgating 200 in seventh place. Fifteen laps into the race, Natalie Decker spun her No. 54 DGR-Crosley Toyota. Busch easily won the first stage. While he cruised to the stage victory, there was plenty of good racing behind him. Ross Chastain and Brett Moffitt battled for 10th, and Chastain was able to nab the spot by the end of Stage No. 1.

After pitting during the first stage break caution, Kyle Busch felt a loose wheel. Fortuitously, the caution flag flew on lap 53, and Busch pitted his No. 51 Toyota to secure the wheel. The caution came as a result of Joe Nemechek, who drove his No. 8 NEMCO Motorsports Chevrolet through the grass, resulting in the splitter being torn off the truck.

Busch restarted 24th, but his truck was, “like playing a video game on super easy.” Busch wheeled his truck all the way back up to the front. With a few laps remaining in the second stage, he chased down leader Ben Rhodes. Rhodes and his ThorSport Racing team discussed how to race Busch. They elected to let Busch pass, allowing him to win Stage No. 2.

Following a fast pit stop by his pit crew, Busch raced Johnny Sauter hard for a few laps before Busch pulled away from him. Busch led the field up to the caution at lap 112 following a second spin for Decker. Matt Crafton came out second to Busch, but Crafton pitted again after he felt a loose wheel. When the green flag flew, chaos ensued.

As NASCAR sent out personnel to clean up the track and ensure the safety of the drivers involved in the caution, the constant precipitation grew, and NASCAR began to lose the track. At first, NASCAR decided to run the trucks around the track under the yellow flag, but that attempt worked to no avail.

Therefore, NASCAR brought the trucks down pit road under the red flag. NASCAR waited out the precipitation, dried the track, and there would be a shootout. Sauter mounted a tough challenge, but he could not defeat Busch. Busch maintained his lead, and Busch claimed victory.

Grant Enfinger finished a strong third, followed by Moffitt.  Rhodes made it three ThorSport Racing Fords in the top five with a fifth-place finish.  Chastain finished sixth, followed by Daytona winner Austin Hill in seventh.  KBM teammates Burton and Todd Gilliland were eighth and ninth, while Timothy Peters was 10th in the second Niece Motorsports Chevrolet.