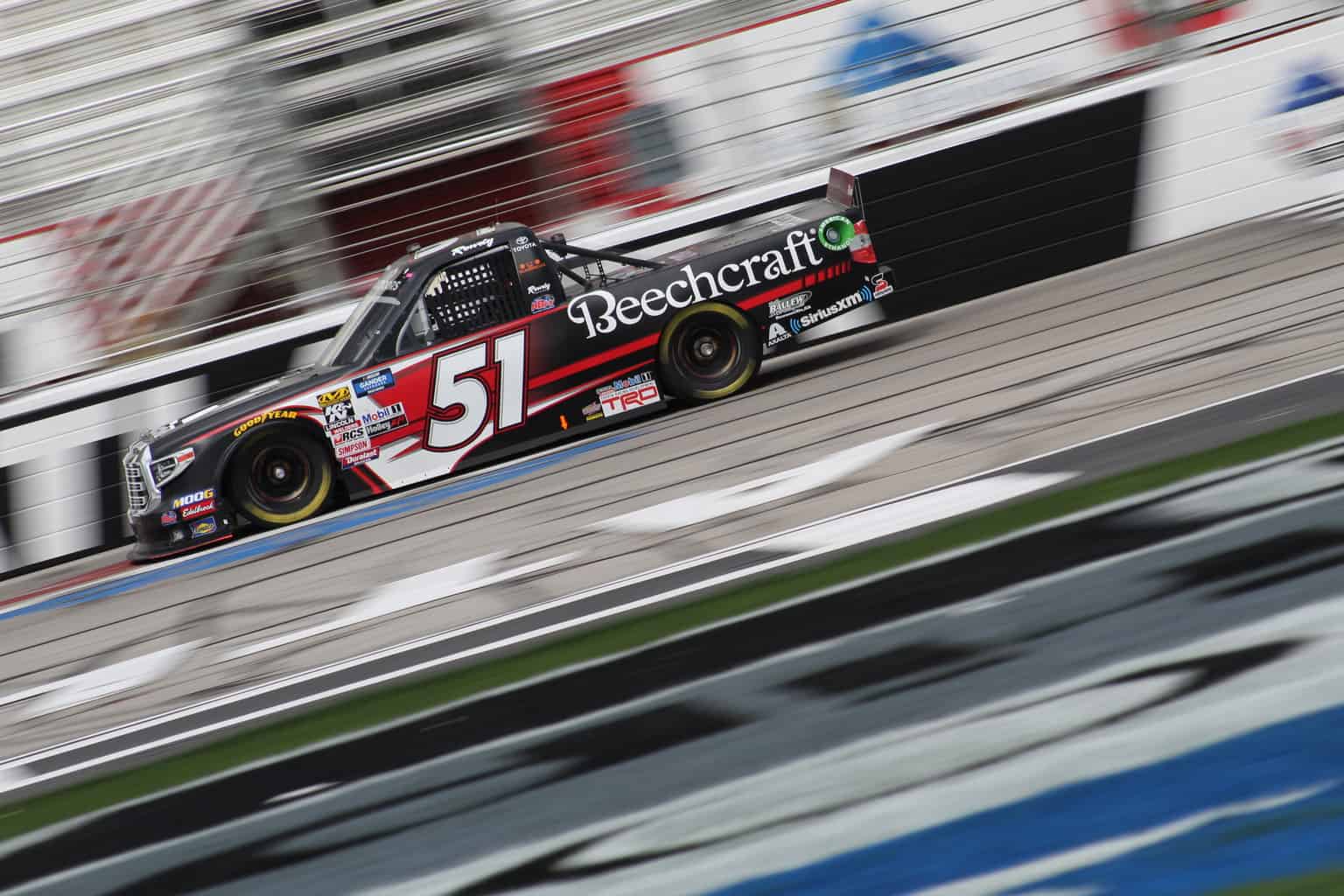 In a Nutshell: Kyle Busch reigned as the weather rained, as both seemed to be the only thing capable of ending the NASCAR Gander Outdoors Truck Series race at Atlanta. The weather was likely inconsequential, as Busch had the dominant truck all race long and picked up his fifth win at the 1.5 mile track in Hampton, GA. Johnny Sauter, Grant Enfinger, Brett Moffitt, and Ben Rhodes composed the top five at the end.

Who Should Have Won: Busch and only Busch. Kyle was the class of the field, administering the type of beatdown that has become the norm at least once every season that he dabbles in the truck series. It broke a six month losing streak for Kyle Busch Motorsports, which is rather long for that team given its track record. The win was Busch’s 52nd on the truck tour, breaking a tie with Hall of Famer Ron Hornaday Jr for the most in series history.

Busch began running away with the race early on. The first yellow flag came on lap 16 when the DGR-Crosley truck of Natalie Decker ended up backwards on the frontstretch. For Decker, it was hardly the rebound she was looking for after completing just a single lap at Daytona last week. Fortunately, there was no inferno this time and she was able to continue on.

The field would complete the rest of the opening stage under green. Busch held off Harrison Burton for the stage win. When debris from Joe Nemechek‘s truck brought out the yellow in stage two, Busch and company came to pit road for tires. Despite surrendering the track position, it ended up working out ok for Busch. He charged up through the field with almost laughable ease.

In the closing laps of the second stage, Busch had moved all the way back up to second behind leader Ben Rhodes. With three laps remaining, Busch pounced and regained the lead. He would claim the second stage over Rhodes by over six-tenths of a second.

When the race resumed, Sauter charged past Busch for the lead. It was short lived however, as the KBM owner/ driver moved back to the point three laps later. When Decker generated a yellow flag yet again with 19 laps to go, it brought the leaders to pit road for tires.

Busch won the race off pit road ahead of Sauter and Matt Crafton. But Crafton was brought back to pit road by NASCAR after his crew failed to get all the lugnuts tight on the left rear. He worked his way back towards the front but just ran out of time to make a challenge for the win. He was only able to climb to 14th at the checkered.

As the green waved to restart the race with 14 laps to go, several trucks came together on the frontstretch. Jesse Little and Parker Kligerman collided, sending both sideways. Chad Finley, Spencer Boyd, and Austin Wayne Self were swept up in the ensuing melee. The red flag was displayed to allow safety crews to clean up the track. During the stoppage, the mist that had been present since early in the morning turned into a drizzle. The track became damp and NASCAR had to extend the red flag to give the jet dryers an opportunity to dry the racing surface.

When racing resumed with five laps to go, Busch shot away from the field. Sauter was able to keep pace but simply couldn’t mount a challenge to the No. 51 Toyota.

Ross Chastain made his second start in the Niece Motorsports No. 45 and once again showed that he can outperform the expectations of his equipment. After finishing third at Daytona, Chastain backed up that run with an sixth place result on Saturday.

For Niece Motorsports, the new year has brought a sudden upswing in performance. The team had no top fives and only three top 10s in 77 races coming into 2019. While he didn’t plan on running the truck series in 2019 prior to the season, Chastain has made the most of the unexpected opportunity. It is certainly proving beneficial for the team as much as it is for him. Between Chastain and Timothy Peters, the organization has turned their four starts in 2019 into four top ten finishes.

– Matt Crafton has started every truck race at Atlanta Motor Speedway. He has 6 top fives in 18 starts, including a win in 2015.

– Anthony Alfredo made his series debut in the No. 17 Toyota, finishing 18th. The short track ace started back in 27th and steadily worked his way up into the top ten. He fell back on the final restart but it was still a strong showing for the 19 year old.

– Sheldon Creed, the 2018 ARCA champion and rookie of the race in the season opener at Daytona, ran in the top ten almost all race long at Atlanta. Unfortunately for him, the final pit stop was costly as he was nailed for speeding on pit road. Creed wound up 12th at the finish.

Up Next: The Truck Series will return to action on Friday March 1st at the Las Vegas Motor Speedway for the Stratosphere 200. Coverage begins at 9:00 p.m. ET on Fox Sports 1.