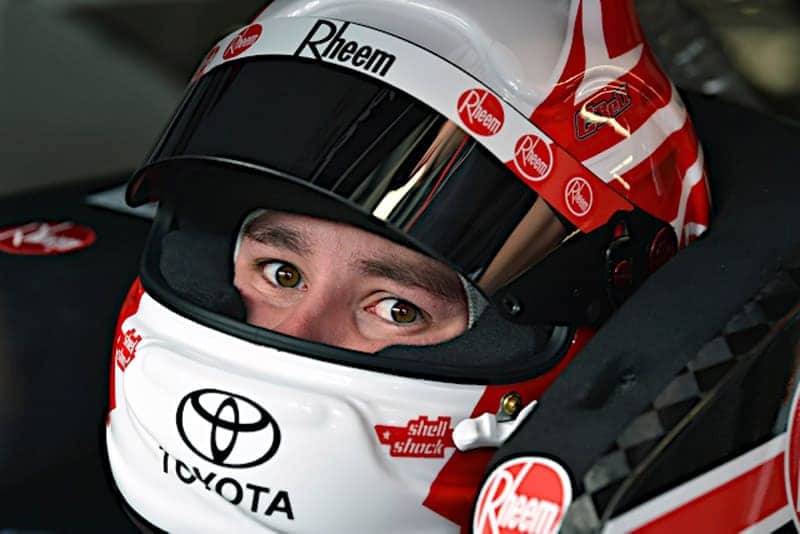 The last four months or so haven’t gone according to plan for Brad Keselowski. He won three straight MENCS races in September 2018 which had him peaking right into the playoffs. That momentum made him a dark horse to join the sport’s Big Three of Kevin Harvick, Martin Truex Jr. and Kyle Busch in last year’s Championship 4.

But as the laps wound down in Charlotte’s Roval debut, Keselowski’s dream of a second title fell apart. He led the field into the wall on a restart in a weird, video game-style wreck which served to torpedo his postseason. Two straight runs outside the top 10 followed; by the time Team Penske engineered a recovery, lifting Keselowski to sixth at Kansas Speedway it was too little, too late for a title.

Instead, Keselowski watched teammate Joey Logano hold up championship hardware at Homestead-Miami Speedway. Suddenly, Team Penske’s Batman was second fiddle to the man he picked to be his Robin back in 2013.

Daytona Speedweeks didn’t offer much redemption. Keselowski was the favorite to win the Daytona 500 only to have bad luck from the second he strapped into a car. Pit road penalties in the Duels led to a 35th-place starting spot; he never wound up leading a single lap.

Add in the flu, taking him out of most of Saturday’s (Feb. 23) practice sessions and Keselowski appeared off to an awful start. It was teammates Logano and Ryan Blaney who looked like they were in position to maximize NASCAR’s new handling package. Austin Cindric, not Keselowski, appeared ready to enter the limelight as a super sub for an ailing veteran.

Feeling really good about our car.

But it seems like these moments are where Keselowski, like most champions, finds a way to dig deeper. Like eight years ago, when driving to wins with a broken ankle elevated his status at Penske the 2012 series champion found his inner strength. 24 hours removed from IVs to keep him functional, he was using every ounce of energy inside the car.

“I lost five and a half, six pounds in less than 10 hours, and I was going the wrong way quick,” Keselowski said of his ordeal. “I appreciate the help of those in the care center.

“You know, I feel like you get a little bit of adrenaline in you and you can get over that stuff pretty quickly, and it might not be the most fun I’ve ever had as a race car driver, but once you get to Victory Lane, you’re not going to remember the pain.”

That’s exactly where Keselowski wound up after a surprising push in the third and final stage. It was Logano, not him, experiencing the bad luck this time with a loose wheel that paved the way for his success. The No. 2 car was at its best in the race’s final run, lifting Keselowski to an unlikely win and reestablishing his status atop Team Penske. The win was the 60th of his career with the team, setting a new record, while surpassing the late Mark Donohue.

With the victory at @amsupdates, @keselowski becomes the all-time win leader in Team Penske history. ?

He passes Mark Donohue with 60 career wins with the team. #NASCAR pic.twitter.com/CshaUVSq3e

“[Donohue] really set a mark that, in some cases, we thought nobody would ever beat it,” owner Roger Penske said. “But Brad had that on his windshield, he’s been looking at that now for a year, and he said this was the year he was going to make it happen.  It’s in the record book now, and he’s going to make it tough for anybody in the future to get there.”

It also looks like Keselowski is back to being a tough out come the 2019 championship chase. – Tom Bowles

Xfinity Series: Christopher Bell Picks Up Where He Left Off Last Season

In 2018, Christopher Bell set the single-season record for most wins (seven) by a rookie driver in Xfinity Series history. But his first checkered flag didn’t come until late April at Richmond Raceway.

With another year of experience, Bell entered the 2019 season as one of the favorites for the championship. He showed why on Saturday in Atlanta, leading 142 of 163 laps, sweeping all three stages.

How about that! Thank you @ToyotaRacing for developing a Supra fast #Supra ? also thx to @rheem and all the fans for your support! Great day today!! #thankful https://t.co/U221QnGOVQ

Bell started the race in third, grabbing the lead from Cole Custer by the end of the first lap. He cruised to the stage one win.

Stage two was much of the same, the No. 20 car dominating, though Tyler Reddick came on strong late in the going. But a late-race incident for John Hunter Nemechek derailed the No. 2 car from closing the gap even more.

In a dash to the finish, Bell held on for the victory, with Custer finishing runner-up. Justin Allgaier, Brandon Jones and Reddick rounded out the top five. – Dustin Albino

Kyle Busch absolutely dominated the Ultimate Tailgating 200 at Atlanta Motor Speedway on Saturday evening (Feb. 23), leading 92 of 130 laps and sweeping the stages. Busch’s team had one hick up when he had a loose wheel and he had to pit again. But Busch quickly went from 23rd back to the lead, gaining 20 spots in just 10 laps.

The win was the 52nd of Busch’s career — breaking his tie with Ron Hornaday for the most all time in the series. Busch now has the most wins in two of the three NASCAR national touring series. He also has the most in the Xfinity Series.

“We’re just here to go out and compete, and win. And obviously everything that’s tallied up over the years has gotten us to this point. We just continue to try our best. Today, it was really, really good.”

Next weekend, Circuit of the Americas will host the season openers for the Blancpain GT World Challenge America, GT4 America and TC America series.  All of these series will run under the overarching banner of SRO America as a result of the Stephane Ratel Organization (SRO) buying 70 percent of WC Vision last year.  The Blancpain GT World Challenge America entry is a healthy 23 cars, higher than nearly any GT race last year.  Defending SprintX champions Miguel Molina and Toni Vilander are back to defend their crown with R. Ferri Motorsport, while Sprint champion Scott Hargrove moves over to Wright Motorsports.

Pirelli GT4 America (formerly GTS) is running combination races for GT4 SprintX, GT4 East and GT4 West this weekend.  A combined field of 32 will take to the 3.4-mile circuit this weekend with some familiar names, such as Aurora Straus moving over to Rearden Racing to drive a BMW with Connor Bloum.  So many changes have taken place that these races will more or less be free-for-alls.  Finally, there are 47 TC America teams entered between the three classes (TCR, TC and TCA).  TCR and TCA teams will race together, while TC teams will continue to compete in their own race.

TC AMERICA AT CIRCUIT OF THE AMERICAS ENTRY LIST

There will be a total of eight races at Circuit of the Americas this upcoming weekend, four on Saturday and four on Sunday.  They will all be either live-streamed on the internet, or air on CBS Sports Network via tape delay. – Phil Allaway