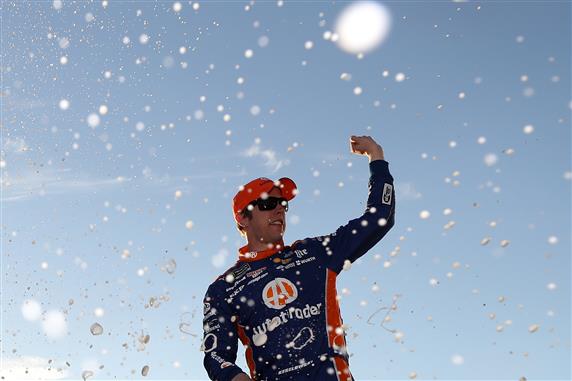 Professional auto racing is about the excellence of man and machine.

Sunday’s Monster Energy NASCAR Cup Series race at Atlanta Motor Speedway served as the first in-race trial of NASCAR’s newest aero package.  For most of the afternoon, the focus was on the machines.  But the race featured a pretty spectacular human triumph by Brad Keselowski.

Keselowski had been battling a flu-like illness all weekend.  He was unable to fully participate in Saturday’s practice session, and stated before the race that he had been feeling 70-80 percent ready to go.  After spending most of the day laying in the weeds, Keselowski took advantage of a good break during a caution period with 50 laps to go.

Since the yellow had fallen during a cycle of green flag pit stops, only two drivers were on the lead lap.  Keselowski was a lap down, but in position for the free pass.

When the race restarted, the No. 2 had to cut through less lapped traffic to reach the front runners, giving Keselowski an opportunity to strike.  It still was not an easy path to victory.

First, Keselowski had to chase down and pass teammate Joey Logano.  Then, he had to hold off a hard-charging Martin Truex Jr. after Logano dropped out of contention.  The No. 19 nearly caught the No. 2 in the final laps, but Keselowski held on to take the checkered flag.

The ending of Sunday’s race recalls a few other winning performances by Keselowski.  His victory at Atlanta two years ago also involved a late charge to the front and a fight for the win in the closing laps, that time with Kyle Larson.  But in terms of gutsy performances where Keselowski was dealing with health issues, look no further than his triumph at Pocono Raceway in August 2011.

A few days before the race, while testing at Road Atlanta, Keselowski crashed directly into a barrier at over 100 miles per hour.  He suffered a bad injury to his left ankle, had a bruised right foot, and soreness in his back.  While he did not have to be hospitalized, Keselowski’s leg was extremely swollen.  It looked as if a watermelon had blown up inside his leg but remained stuck under his skin.

The ankle injury put Keselowski in a tough spot.  While he vowed to race at Pocono, nobody was sure how long he could stay comfortable in the car.  Additionally, Keselowski still had a slim chance of making the postseason in 2011.  At the time of the injury, he was 21st in points overall, but had secured a victory at Kansas Speedway.

Under the rules for the Chase at the time, NASCAR would take the top 10 drivers in points plus two wildcard drivers.  The wildcards would be the two winningest drivers who were 11-20 in points after 26 races.  Going to Pocono, there were three drivers with a win in the 11-20 points range, meaning Keselowski had to leapfrog two of them to have a shot at reaching the postseason.

Or he could win another race.  And that is exactly what Keselowski did at Pocono the following Sunday.  It was long and grueling affair, the final 500-mile race at Pocono on a day when NASCAR was constantly fighting rainy conditions.  Running second under caution with 20 laps to go, Keselowski opted not to pit.  Only the leader, Kyle Busch, and three other drivers stayed on track with Keselowski.  When the race restarted with 16 laps to go, the No. 2 slipped past the No. 18.

Just as Truex did on Sunday, Busch tailed Keselowski lap after lap, but he was never able to make the pass.  Keselowski clinched his second win of the season and third of his Cup Series career, giving him the boost he needed to get back in Chase contention.

As impressive as the Pocono victory was, Keselowski continued to perform exceptionally well during the late summer.  While he and the No. 2 team had shown flashes of brilliance together, it was like a switch had flipped in the Team Penske shop, turning Keselowski in to a contender every single week.

In the next seven races, he earned six top six finishes, including another win.  Although the No. 2 team had cooled off by the end of the season, Keselowski was strong enough to finish fifth in points.  The following year, he would win five races and the first Cup Series championship for Team Penske.

Since 2011, Keselowski has gone on to win a lot more races.  He scored three big wins in September last year, all in a row, at tracks like Darlington Raceway and Indianapolis Motor Speedway.  The third win, at Las Vegas Motor Speedway, seemed to set up Keselowski for a championship run.

But after a difficult Round of 12, the No. 2 team did not have enough points to advance any farther.  Keselowski’s championship run was over before it began.

The 2019 season gives Keselowski another shot at a second title.  And while Sunday’s win may not have the magnitude of a Southern 500 or Brickyard 400 win, the victory does make Keselowski the winningest racer ever in Penske equipment, with 60 triumphs to his name.  That distinction feels like a fitting reward for a driver who has a knack for capturing checkered flags in the most difficult of circumstances.

Keselowski’s broken ankle did turn the tide of his 2011 season, just in a way that nobody expected.  What Keselowski does after defeating the field and the flu in Atlanta remains to be seen.