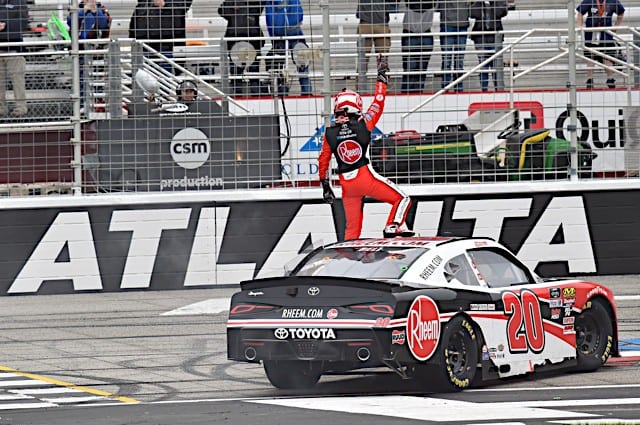 If the old cliche that the “real” NASCAR season doesn’t start until after Daytona is really true, it could be a year full of NASCAR Xfinity Series drivers chasing Christopher Bell.

Bell started from the pole at Atlanta Motor Speedway and dared any driver to beat him. Tyler Reddick looked like he might have a car capable of running with Bell’s No. 20 Toyota on long runs. Cole Custer could hang in there for a few laps on any restart.

Neither of them, nor anyone else for that matter, was able to mount a challenge serious enough to call the outcome of the Rinnai 250 into question. Bell led 142 of 163 laps and won every stage en route to his ninth Xfinity victory. It’s his first of 2019 and first for the Toyota Supra in NASCAR competition.

Keep in mind that was with Bell saying he felt like he didn’t have everything figured out in the first two stages. He even thought the team could clean some things up going forward.

“I don’t know about that one,” Bell said in Victory Lane when asked about the No. 20 team’s seemingly perfect execution. “I felt pretty sloppy there as a driver there sometimes. Running the yellow line is so hard. I don’t know, I would just struggle on the longer runs there.”

He even alluded to being thankful for the final caution that came out with less than 10 laps to go after John Hunter Nemechek went around in Turn 2 for the only incident-related yellow of the afternoon. It allowed him to get fresh tires and fend off any rivals on that final restart.

But even with Bell feeling less than 100 percent, it didn’t look like anyone in the field could have made it a race. The thought of Bell improving on his seven-win 2018 campaign has to be a sobering one for the rest of the Xfinity garage.

Since there wasn’t much intrigue in terms of Bell, the best story from Atlanta involved the battle of a driver behind him. Jeffrey Earnhardt became one of the feel-good stories of the offseason when it was announced he would drive a partial schedule for Joe Gibbs Racing. Of course, that warm feeling NASCAR fans get any time an Earnhardt is running up front would only last if the 29-year-old held up his end of the bargain. He needed to show some promise when given a chance in top-notch equipment.

Earnhardt did exactly that on Saturday. He ran within the top 10 the whole afternoon, sometimes even better than that. Even after getting shuffled back a bit from starting right beside Bell on the final restart, Earnhardt kept his composure and brought his No. 18 Toyota home in sixth place.

Not only was that Earnhardt’s best finish in the Xfinity Series, it was his best result in any of NASCAR’s top three divisions. The run edged past a seventh he picked up in the Truck Series way back in 2011.

It didn’t mean the kind of mania that would likely occur if and when Earnhardt can nab a victory. But it was an important step for the driver to take, particularly since he won’t be back in the No. 18 until Texas.

“It is awesome, you know, just to go and compete in a really good car like this,” Earnhardt said. “I hate that we got caught outside on the last restart. The restarts are really tough on the outside here, but the Toyota Supra was really fast. These guys put me in a heck of a car.

“We came up short on the win, but we showed we belong here, and we’ll run up front in the rest of the races.”

There will be more than a few fans pulling for him to do exactly that.

Similar to Earnhardt, Chase Briscoe was tabbed for arguably the best ride of his career in 2019, driving the No. 98 Ford for Stewart-Haas Racing with Biagi-DenBeste. His situation is even better, though, since it’s a full-time gig.

But Briscoe has not had much fun so far to start the season. After a 12th-place finish at Daytona — worse than it sounds, considering how little passing went on during the season opener — Atlanta was terrible.

First, Briscoe narrowly avoided disaster during a close call with Noah Gragson during stage two. He then shook that off and made his way into the top 10 before having a tire go down and finding the outside wall. Adding insult to injury, NASCAR said Briscoe drove through too many stalls on his way into the pits. He was called back in for a pass-through penalty, ending any hope of a return to contention. His day ended a lap down in 15th place.

With so few cars carrying the Ford banner in the NASCAR Xfinity Series in 2019, there’s going to be more of a spotlight on each of their drivers, fair or not. Right now, Briscoe seems like he’s a fairly distant third behind teammate Custer and Austin Cindric, and that’s not a place he’ll want to stay.

We’re two races into the season and there have now been … well, not many passes for the lead in the Xfinity Series. At Daytona, the issue was single-file racing. There was a reluctance to even attempt to change it since the consequences for pulling out of line and not having anyone go with you were severe.

There were no such issues this weekend, as actual back-and-forth competition occurred within and just outside the top 10 throughout. Alas, since that didn’t extend to the leader, it was still hard to call the Rinnai 250 a “good” race.

Atlanta Motor Speedway has had a recent tendency to produce dominant performances. (See what Kevin Harvick did during the Monster Energy NASCAR Cup Series race last year.) Bell was even more unbeatable on Saturday. Gragson was the only other driver to lead a decent-sized chunk of laps — and that’s because he stayed out longer than everyone else during a green flag pit stop sequence.

So part of it may just be the track, and business could pick up again as soon as next week in Las Vegas. Check the entry list for a clue. Last year, Kyle Larson led more than 140 of 200 laps on his way to victory, but at least we got 10 lead changes and six different leaders along the way. That would still qualify as an improvement over the lack of drama in the first two races of 2019.

No true underdogs finished Atlanta inside the top 10, though Ryan Sieg nearly made it two straight by coming home 11th. Instead, let’s throw some props in the direction of Brandon Brown. Brown ended up finishing 13th in his No. 86 Brandonbilt Motorsports Chevrolet.

That might not sound like all that much of an accomplishment. But Brown finished on the lead lap and with his best ever Xfinity result. It was just the fifth top-15 finish for Brown in any of NASCAR’s top three series, and the first to come outside the Truck Series.

Progress? You’d have to say so, and it comes at a fantastic time for the team as it tackles the full Xfinity schedule for the first time.

There’s not many to speak of this week. Only Ryan Preece hopped down from the Cup Series and just one other driver in the field (Bayley Currey) wasn’t running for Xfinity Series points. Preece had a fine but relatively uneventful day, starting sixth and finishing seventh. Unlike the Daytona 500, he didn’t have to perform any feats of derring-do to avoid massive wrecks along the way.

It was a stark contrast to the 2018 race, when Harvick smoked everyone and Joey Logano finished runner-up. Yes, that’s more or less what Bell did this weekend, but at least he’s an Xfinity regular.

“If he ran the bottom, I think I would have had him. That’s just not what happened. He kind of took the air away … It was close, man. I thought I was going to have a run going down the backstretch but it just wasn’t enough.” -Cole Custer on whether he had a shot at Bell at the end of the race

“We put a lot of work in on practice doing a line that I’m traditionally not very good at, and it just seemed to come to us pretty well in the race. Unfortunately, we just had some miscues that took us back, but our car was great.” – Tyler Reddick

“We were pretty good that first stage, and the second stage we made an adjustment, and unfortunately, it just didn’t do what we wanted it to do.” – Justin Allgaier

What we saw from Bell on Saturday could be a sign of things to come for the rest of the season. It’s easy to forget that since he didn’t win the championship in 2018, Bell still has unfinished business despite finding Victory Lane seven times last year.

There was always the possibility the new Supra would throw a wrinkle or two at the Toyota teams. But so far, that clearly isn’t the case with the No. 20 bunch. Bell didn’t grab his first checkered flag until Richmond last season; expect him to have plenty when the Xfinity Series gets there this time around.

At least it wasn’t all doom and gloom for the rest of the garage as Custer, Reddick and Allgaier all showed flashes of potential at various times during the race. Bell figures to be the favorite all the way to Homestead, but all three of those drivers and possibly one or two others (Cindric, maybe?) should ensure he has to bring his “A” game every week.

Vegas, baby! The Boyd Gaming 300 will take place on Saturday, March 2 with coverage on FOX Sports 1. Kyle Larson won the event in 2018, though he was pushed at times by, you guessed it, Bell.