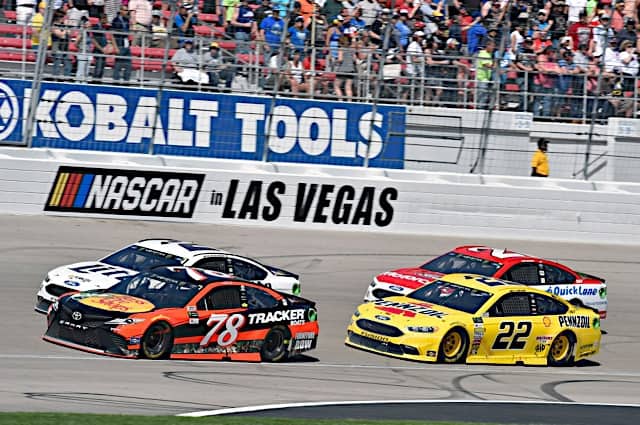 There is an argument to be made that this Sunday’s 400-miler at Las Vegas Motor Speedway might just be one of the most important races in NASCAR’s recent history.

With the 2019 package due to made its “full debut,” the drivers, teams and fans will all be itching to see just what exactly it is we’re going to get. This time last year, Kevin Harvick absolutely dominated, leading 214 of 267 laps on the way to victory. What we’ll see on Sunday will, NASCAR hopes, be a little different.

“I feel like it’s going to be a little bit hairy and crazy, you know?” Martin Truex Jr. said commenting on the January test, “It definitely looked like the leader had a big advantage. I’m a little worried about that, but it looked like the racing throughout the pack was pretty good.”

So, will we see one driver, well, drive away from the field, or will we see more passing opportunities. Ultimately, whatever transpires on Sunday, there will no doubt be a plethora of opinions both good and bad. Here’s to hoping it’s more of the former because if Sunday’s race is a stinker, it doesn’t bode well for the season, at least in the short term.

Between them, the brothers have a championship apiece, 1150 Cup starts, 81 wins, 322 top fives and 552 top-10 finishes. Add in Kyle’s 92 Xfinity Series and 52 Truck Series wins, not to mention five wins in 30 Xfinity starts and four Truck wins (28 starts) for Kurt and all told, it’s a sustained and impressive haul. Back to its earliest days, NASCAR has had a history of famous siblings: Darrell and Michael Waltrip, Bobby and Donnie Allison, Bob, Fonty and Tim Flock, Ward and Jeff Burton, Hermie and Elliott Sadler to name but a few. And then there’s the only other pair of brothers – Terry (1984, 1996) and Bobby Labonte (2000) – to have won Cup championships.

At 40 years of age, Kurt is on the back side of the full-time Cup career he began in 2001, but Kyle, at just 33, could conceivably drive on for another decade. And when all is said and done, the Busch brothers will end up as Hall of Famers, and perhaps, statistically the most successful sibling duo in NASCAR history.

Another week, another win for Christopher Bell who picked up his eighth Xfinity win in the last 28 NXS races. While he couldn’t add an NXS title in 2018 to the NGOTS championship he won in 2017, he had the most wins (7), most top fives (18) and most laps led (759) last year, but a disappointing final race at Homestead-Miami Raceway left Bell in fourth and ruing a missed opportunity he will be determined to right in 2019.

Sunday’s victory was also a milestone for Toyota: the first win for the new Supra and the 150th NXS manufacturer victory. The NXS is shaping up to be an exciting battle this year with the likes of Justin Allgaier, Cole Custer and 2018 champ Tyler Reddick expected to make a deep run at the title.

How about that! Thank you @ToyotaRacing for developing a Supra fast #Supra ? also thx to @rheem and all the fans for your support! Great day today!! #thankful https://t.co/U221QnGOVQ

Given the way Bell’s been racking up victories, you can fairly safely predict Saturday will not be his only visit to Victory Lane this season. Expect him to be a factor at most every track all season long and to contend all the way to the final race.

Next Up: Las Vegas Motor Speedway

For the third race of this season the circus heads to Las Vegas Motor Speedway, which is hosting its 23rd Cup race – a streak that runs back to 1998 and a race won by the Hall of Fame legend Mark Martin. Only five active drivers have won a race at LVMS, all of whom are former Cup champions.

As usual, Jimmie Johnson leads the way with four wins, while Atlanta Motor Speedway winner Brad Keselowski has three, including the most recent visit in the 2018 playoffs. Harvick has won twice and Joe Gibbs drivers Martin Truex Jr. and Kyle Busch have each won once.

Ryan Blaney, albeit with a smallish sample size of five races, has the best average finish (8.4); Kyle Larson has finished second, third and second in the last three visits, but all those numbers essentially become irrelevant ahead of perhaps the most interesting Cup race in the track’s short history. It’s fair to say the racing we see Sunday will likely look quite different – maybe radically different — by the time the Cup Series swings back through Sin City in September, but for now all eyes are on LVMS this weekend.

Johnson in the Booth

As you might expect from a consummate pro like Jimmie Johnson, the seven-time champion made a smooth transition into the world of TV last Saturday afternoon, broadcasting the Rinnai 250 at Atlanta Motor Speedway alongside Adam Alexander and Kevin Harvick.

Going live on @FS1 with @adam1alexander & @KevinHarvick. Got my broadcasting rookie stripes on ?? pic.twitter.com/49mN0oxmgz

Prior to the race, Johnson noted: “I’m excited to come in and see the race from a different vantage point….I’ve been a big fan of Kevin’s work in the booth and feel like we’re going to have a great time and add a lot of detail to the race, so I’m excited to have that opportunity in Atlanta.”

And yes, that’s just what Johnson did but it’s hardly a surprise. Ole seven-time really is that good and if he wants a career in broadcasting when his Cup career is done, my guess is that there will be no shortage of takers.