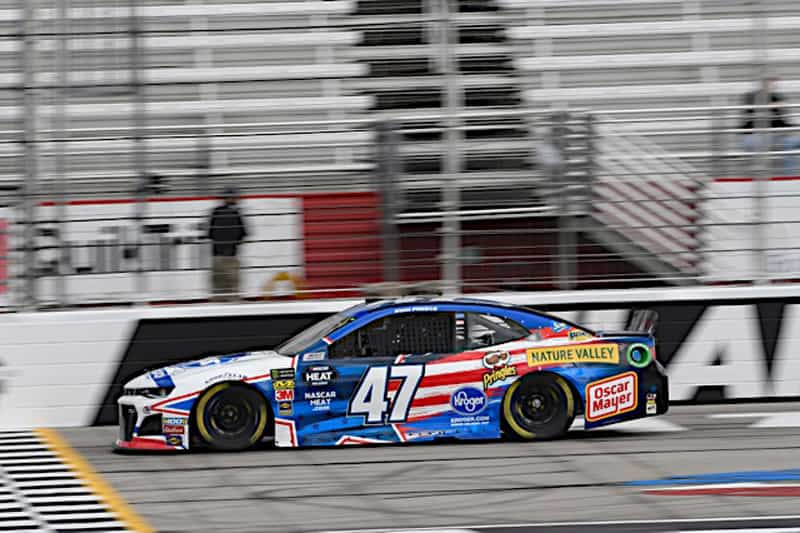 This season will be very unique for the Monster Energy NASCAR Cup Series with the new aero package, which may very well produce some surprises throughout the year. We saw several underdog teams have strong weekends at Atlanta, and some have the potential to continue that all year long.

One team that showed strength on Sunday was JTG Daugherty Racing with Chris Buescher and Ryan Preece. Both ran inside the top 15 most of the day. Preece had a chance at a top 10 had it not been for a late race pit incident. Buescher did score a top-10 finish, which begs the question – can they continue this performance through the rest of the season or was Atlanta just a fluke?

The debut of the full new aero package takes place this weekend at Las Vegas Motor Speedway. There have been many differing opinions about what we will see and many have been doubters about the racing, just based on the test back in January.

NASCAR has made changes to the cars mid-season based on the reaction of people within the sport. Even though nobody has seen the full use of the new aerodynamics at work this season, if it doesn’t work out, would NASCAR make a change to the cars?

Q: After the 95 was the surprise at Daytona, who surprised you most at Atlanta from the underdog teams and who can keep it going all season long? Quinn D., Newark, DE

A: Sunday at Atlanta gave us many surprises after an eventful race. With this new package, it was unpredictable and allowed some underdogs to shine with the lessened horsepower and greater downforce in the cars. If I had to pick, though, I would go with the JTG Daugherty Racing cars of Chris Buescher and Ryan Preece as the underdog team with the most “staying power”.

This team has struggled for several years, and they have only one Cup win as a team with AJ Allmendinger back in 2014 at Watkins Glen. That race remains as their lone win and lone Playoff berth in their history at the top level of NASCAR. Now with a fresh face in the No. 47 in Preece and Buescher back for his fourth season in the Cup Series — and third with this team — the team is ready to take the next step.

It was announced in the middle of last season that the team would switch to Hendrick Motorsports engines for the 2019 season after using Richard Childress Racing engines since switching to Chevy back in 2014. That alone should improve the cars’ performance. Plus, with full sponsorship on both racecars, the team has the money to put forth the effort.

Buescher and Preece seem like a good combination of drivers. Buescher has only one Cup win in that rain shortened Pocono race in 2016, while Preece who comes from the Modified ranks and ran part time for Joe Gibbs Racing in the Xfinity Series the last two seasons, scoring one win in 2017.

The third or fourth year in Cup usually is the breakout year for for future stars, and I believe Buescher is going to prove he belongs this year in his fourth season. He may not win a race, but the performance will be much improved over what it has been since he joined the team back in 2017.

Preece, on the other hand, will have a good battle with RCR’s Daniel Hemric for Rookie of the Year honors. After running inside the top 10 near the end of Sunday’s event, he had a pit road issue that ended his day. If it was not for that, we could have seen both JTG cars finish up front, something we have rarely seen outside of a superspeedway.

While this weekend’s race at Las Vegas Motor Speedway is only the third race of the season, it may be an overreaction to say these cars can be competitive after one good race at Atlanta. However, they are due for a breakout year. They have two talented drivers, a new engine alliance, and a fresh start. They are not going to dominate races, but I would not be surprised to see one of these two steal a win throughout the season if they continue to improve week to week.

Q: Even though we have not seen the full new package yet, IF it somehow does not work out completely in the next few weeks, can you see NASCAR making any changes to it mid year? Ellen H., Montgomery, AL

A: What makes me think NASCAR will not do anything to the cars during the year is how emphatic they have been that this could be the future of the sport and they want us all to get a glimpse of what it could be like. Whether that means they actually would do anything though, that is another story.

Having any thought about any changes to the package is a very negative outlook on the whole topic, but I have a very positive attitude about it right now. I was a doubter when it was announced last season but I said I would definitely get excited and give it a chance. Atlanta was a great race to me. Though the full package was not used in Atlanta, I did enjoy the race a lot. We get to see the whole thing at Las Vegas this weekend, so we will truly get a reading on it.

NASCAR more than likely will not make any changes to the package during the season. However, if they somehow did, it would not be the first time they have shaken things up mid-year.

Let’s go back to 2010. The wing on the back of the “Car of Tomorrow” would only last five races that season. NASCAR brought back a rear spoiler at Martinsville that season in the spring and did not look back. That was a major change for teams.

More recently now, 2015. Remember the default package with the tapered spacer and big rear spoiler that year? NASCAR decided halfway through the season that they would like to try a low downforce package and a high drag, high downforce package at a few of the races. They used the regular package for the majority of the remaining races once this was announced but there were a few that the new packages were tried out at. That threw a curveball to some teams as well.

The point being made here is that NASCAR has not been afraid in the past to change it up mid year if something is not working out the way they had hoped. Again, this is a very pessimistic way to look at things. Everybody involved in the sport should go into this weekend with a positive outlook and expect to see great racing. There are going to be people who are already calling for change, but we have not even seen the full use of the new package yet. Let’s all give it a chance. NASCAR will not make changes right away, if any, in 2019.

Should it not be successful throughout this season, then maybe NASCAR should try something a little different and indeed make some changes. But for right now, this is the package, and whatever  we get is what we get. Not everybody is going to be pleased with what they see, but we should expect this to work out. NASCAR would be put in a tough position if the package fails, but they have good leadership with Steve Phelps, Steve O’Donnell, and many more at the head of the sport. They will do what they can to point the sport in the right direction.

Whether changes will come, we need to wait until we get a few races with these rules, then we can make a judgement if we believe any are needed.

“the team would switch to Hendrick Motorsports engines for the 2019 season after using Richard Childress Racing engines since switching to Chevy back in 2014. That alone should improve the cars’ performance.”
Until recently, I had failed to appreciate, or to know or to pay attention, that HMS apparently makes “better” engines than RCR (I might add that engine performance is not synonymous with team, driver , or car performance, though there are close relationships).