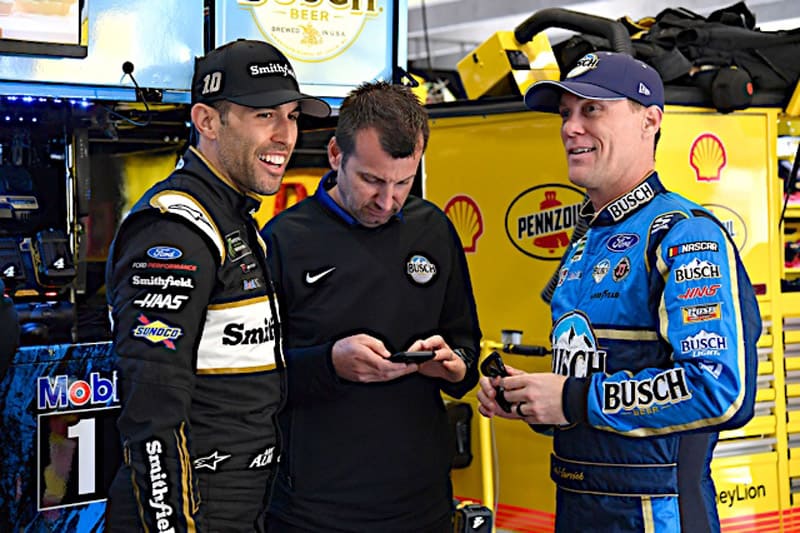 Brad Keselowski found some Atlanta magic as he was able to use the new highly anticipated aero package to his advantage. While there are still many unknowns to figure out with the new package, does Keselowski’s victory suggest he is the favorite with the new rules?

After earning his first pole in six years, is Aric Almirola a force to be reckoned with this season?

Truex’s teammate and Daytona 500 champion Denny Hamlin had a very quiet and lackluster Atlanta weekend. Will the upcoming races prove any different for the No. 11 driver?

Questions remain as NASCAR embarks on the west coast swing. After the initial glimpse of the new rules package, our Frontstretch experts had the difficult task of choosing their top 12 drivers in present day NASCAR.

What has happened to Brad Keselowski? He started out back at Daytona. Then he crashed… and crashed again. Yet, he still came home with a top 12-finish. Then, he misses a practice session at Atlanta because of illness and took a trip to the infield care center.

Oh, he also won the race the next day, holding off a hard charging Martin Truex Jr to claim his second Atlanta victory in three years.. Keselowski has proved he is one of the most formidable drivers this season. Look out.

“Like Jordan, had the flu, and dominated, getting the win.” -Rob Dutzar Jr, Rob’s NASCAR Blog

“Had a sick win at Atlanta.” -Godwin Kelly, The Daytona Beach News Journal

Then, the candy-man strapped behind the wheel of a Monster Energy NASCAR Cup Series car for the 500th time in his illustrious career. Ironically, Busch rarely competed in the top five and didn’t even lead a single lap in the 500-mile event, but he still sits third in the points standings.

The numbers for Kyle Busch after 500 Cup Series starts. pic.twitter.com/1iC2VnrDnx

“Busch worked his way back to sixth from a cut tire, but couldn’t get the job done with a strong car.” –Adam Cheek, Frontstretch

The Atlanta Motor Speedway master was snake-bitten again. Despite being the defending winner, Harvick, along with Aric Almirola, Martin Truex Jr, Kyle Larson, Joey Logano, and Ricky Stenhouse Jr seemed to be caught up in a leaders-jinx, where race leaders succumbed to bad luck or penalties. Despite the jinx, Harvick remains quite optimistic for the rest of the season, as well as his son’s racing career.

I kinda like his idea. Gotta be ready for Keelan’s truck debut in 2029. https://t.co/FpseoqHpSV

“Once again, Harvick was competitive at Atlanta, but he just could not quite keep pace at the end and had to settle for 4th place.” -Ryan Holman, Ryan Holman on YouTube

“OK, the 2014 Cup champion didn’t win at Atlanta. But at least the panelists got to enjoy some Bloomin’ Onions on Monday, no?” -Rob Tiongson, The Podium Finish

Many of our panelists questioned how Truex would adjust to his new home at Joe Gibbs Racing. If Atlanta was any indication, he is doing quite well. Have a listen to what he said after the race.

.@MartinTruex_Jr felt like he had the best car at @amsupdates today. Do you agree? pic.twitter.com/xvfWz3qLre

“So close, yet still so far.” -Dr. Mark Howell, Frontstretch

Like Daytona, Logano had a car that ran up front for most of the day, and ironically, led 22 laps. However, the No. 22, encountered a multitude of problems on pit road including a loose wheel and a race long “blame game” with Alex Bowman and Martin Truex Jr about pit road real estate. These issues ultimately derailed his winning chances. Let’s see if the 22 team can get things cleaned up on pit road at Las Vegas this weekend.

"If I'm blocked in, I will push him off the jack."@joeylogano is not pleased with @AlexBowman88. pic.twitter.com/zMzwvAKQc7

“Tire problems ruined his shot at the win. Did anyone happen to see Michael McDowell hanging around the No. 22’s tires?” -Massie

Kyle Larson debuted his new paint scheme at Atlanta and lead a race high 142 laps, but then got one of those darn speeding penalties. Let the McDonald’s puns fly.

“Larson wasn’t lovin’ it after a speeding penalty, but still led 142 laps.” -Cheek

“Yung Money’s run in a McDonald’s car matched the experience of eating at the restaurant – great for the first few hours, then crappy for the rest of the day.” -Aaron Bearden, Motorsports Beat

“Who cares that he didn’t win? The real thing that matters is that Owen Larson gets free happy meals out of this deal. You must keep the 2044 Cup champion happy.” -Zach Gillispie, Frontstretch

Denny Hamlin seemed surprisingly well-rested at Atlanta after his Daytona 500 triumph. Hamlin started inside the top five, but had a quiet day meandering around the back half of the top ten, ultimately coming home 11th. But, Hamlin is not focused on racing at the moment. The basketball aficionado found himself questioning an odd coincidence.

“Hamlin already had to hear his friend Michael Jordan talk about how good he was when he had the flu. Now he has to hear it from a fellow driver as well.” -Massie

“Wait Hamlin was in the race this weekend? I didn’t notice.” -Finley

Like younger brother Kyle, Kurt Busch also hit a milestone at Atlanta. As the longest tenured driver in the Cup series, Busch notched his 650th career start. After disappointment, the veteran wheeled the No. 1 to position No. 3.

Busch will have the home-town advantage as the series travels to Las Vegas Motor Speedway this week.

Where do you think the driver of the No. 1 will finish today? pic.twitter.com/NZTI44ZvL2

“Only 2 races into his CGR stint, and he’s already selling me on a possible playoff run.” -Eric Estepp, Out of the Groove

He must be a racer.

“Ole’ Clint was fast at Atlanta and I think he’s becoming one of the most consistent drivers in the sport right now.” -Alex Timms, Frontstretch

A seventh-place finish was decent, but not spectacular for Erik Jones. However, Jones is one of only two drivers to score a top-10 finish in both events this season. The other driver? Teammate Kyle Busch. Yet, Jones has a daunting task ahead at Las Vegas Motor Speedway, a track that has not been kind to him in the past.

We had a pretty good @DEWALTtough #camry today, ended up 7th pic.twitter.com/ceRPoD6EiI

“I’m just waiting for That Jones Boy to win the Brickyard so we call him “Indiana Jones.” Oh wait, that’s a long ways from now.” -Tiongson

Almirola scored his first pole in over six years, and was in contention to have a great finish, but like so many others, an issue on pit road cost him a deserved finish. However, Almirola is heralded as one of the best draft racers in NASCAR. The new package may just play right into his hands. Almirola has already shown that he is in contention to cook up a championship.

The question I get every night… What do you want for dinner? Tonight, easy answer. @SmithfieldBrand pork ‘10derlion’. ? pic.twitter.com/sJhohif1oQ

“Seriously, Almirola, perhaps you should give bacon to Michael Waltrip so he can be energized for his grid walks.” -Tiongson

“Imagine you are a red-blooded American male who just happens to be a professional race car driver sponsored by a meat company. Why would you even try any more? You’re living every man’s dream” -Gillispie

Blaney is on Dale Jr’s podcast this week. Enough said.

“YRB ran well throughout the race and led some laps. Unfortunately, a late-race pit stop cost him a decent finish.” -Kobe Lambeth, Kobelambeth.com