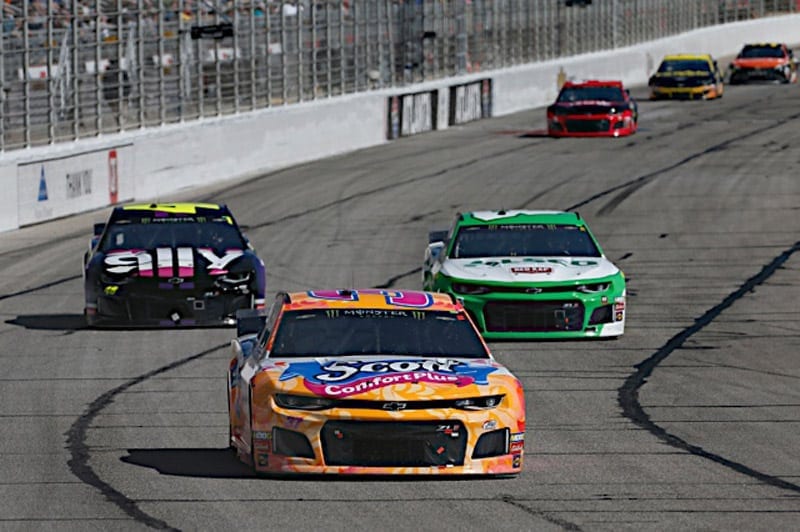 For the second time in 2019, JTG Daugherty Racing put a driver in the top 10 at the end of the weekend’s Cup event. This time, it was Chris Buescher carrying the torch for the organization at Atlanta Motor Speedway, as he brought the No. 37 Chevrolet across the stripe in ninth place.

Buescher, the 2015 Xfinity Series champion, may already have a win on his Monster Energy NASCAR Cup Series resume, but it hasn’t tempered his desire to prove that it was no fluke. Now, in his third season with JTG, Buescher has made some great strides to be more competitive on the “meat and potatoes” part of the schedule: the 1.5-mile ovals that dominate the bulk of the stops on the Cup tour. Having never finished better than 24th in three previous visits to Atlanta, Sunday’s finish provided some validation that the team is progressing with Buescher behind the wheel.

“I knew that 24th-best finish stat and that was disappointing to me,” he said. “I knew we were going to better it today about after the first stage. This group worked hard. We made big swings to get up there and to start 30th and be able to get a top 10 out of this thing, That helped get us out of that hole or start to dig us out of that hole we got in with The Big One at Daytona. Just puts everyone in a good mood and Ryan (Preece) was running good too and I’m not exactly sure what happened, but I know something a little bit out of his control. I think this is a sign of good things to come. We’ve got some more work to do, but heck of a start.”

David Ragan put forth a strong showing at his home track in his Front Row Racing Ford. The pride of Unadilla, GA was able to stay on the lead lap all day and notched a 16th-place finish on Sunday. It was Ragan’s best result since he finished 16th at the Charlotte ROVAL last fall. Additionally, it marked his highest Atlanta finish since he came home eighth back in the fall of 2008 when he still drove for Jack Roush.

After a strong opener at Daytona, Preece had high hopes coming into Atlanta. Preece and teammate Chris Buescher spent most of the afternoon on Sunday in the top 20. However, for the second straight week, one of the Rick Ware Racing cars was involved in an incident during green flag pit stops. Preece came to pit road for service with 53 laps remaining in the event. As he accelerated out of his box, he collided with RWR driver BJ McLeod, sending McLeod’s No. 52 Chevy spinning backwards. Preece returned to pit road heavily damaged. The crew determined that he would be unable to continue, relegating the rookie contender to a 35th place finish. Afterwards, he gave his thoughts on the situation.

“I was just trying to make sure I wasn’t speeding,” he said. “And when I looked up, (McLeod) was coming in the pits. So, it’s a mistake. What are you going to do? It’s just unfortunate for us because we were having a really good run. Like I said, we are going to have some good cars this year. So, if we can keep that, we’ll be really good at Vegas and I’m just really proud of everybody with JTG and Kroger. There’s nothing else you can do other than that. So, I’m looking forward to next week.”

On Saturday, the Rod Seig owned No. 39 of Ryan Seig once again highlighted the underdogs in the Xfinity Series race. After earning a top five at Daytona, Seig backed it up with an 11th-place finish at Atlanta. It was also a banner day for Brandon Brown, who piloted his family owned car to a career-best 13th at the checkered.

As for the NASCAR Gander Outdoors Truck Series race on Saturday, the Niece Motorsports team had another impressive outing, as both Ross Chastain and Timothy Peters finished in the top 10. Rookie Tyler Dippel ran 11th and former Xfinity Series driver Brennan Poole grabbed a 13th-place result. It is worth noting that Poole drives a truck owned by Steven Lane, whose team had made only five starts prior to the 2019 season.

Chad Finley is a part time competitor in the NASCAR Gander Outdoors Truck Series. The DeWitt, MI native has driven in late models, the K&N Pro Series East, and ARCA and has proven to be a quick study. In 2017, he scored a win in the ARCA race at the Nashville Fairgrounds track, only his 14th start in the series.

Finley put the truck series on notice last summer, finishing sixth at Gateway in just his third truck start. Unfortunately, last weekend at Atlanta, he was swept up in a late race accident that relegated him to 28th at the finish. However, chances are better things are on the horizon for Finley and his family owned team as their trucks are always competitive. With some good racing fortune, Finley will likely get the finishes that he and his team are capable of, though the team won’t be making the trip to Las Vegas this weekend.

With a P16 finish, @DavidRagan has set a new Front Row Motorsports best at @amsupdates! pic.twitter.com/OjVy80jNhM

Got some damage from a pit road incident, cost us a ton. Had to pit under green. Oh well…we learned a lot and on to the next one

Not a great night for the CFR bunch on or off the race track at @amsupdates. Glad both our drivers are safe. Vegas truck was in the front of the hauler though, Chad’s truck came loose and banged it up good. Evaluating the situation with Vegas so close. pic.twitter.com/gZPgndEfnn

I would think it would be nice if a writer, or marketer, could quantify the advertisement of underdog teams during race broadcasts. Not present in this article, but will be present in other articles, is a writer complaining about the lack of visibility of the cars running much later in the order. Marketers keep track of this stuff (marketers keep track of how much verbal mentions and visual depictions of sponsors occur during a race, and marketers then translate such visual and verbal exposure to dollars equivalence in advertisement). I assume Nascar follows such information, since Nascar has to recruit sponsors.
Rather than complain about broadcasters not mentioning the back half of the field, a writer could quantify such (such as writing team x, which finished 29th, had y seconds of mention and z seconds of visuals, and thus team x had $3k worth of exposure during the race, while team k, which finished 2d, had $110, 000 worth of exposure).
My overall beef is there is no excuse for broadcasters not showing and mentioning, even if only briefly, the teams in the back portion of the field. Nascar races are like baseball games – both have plenty of time in which nothing material is happening, and announcers have plenty of time to fill. Broadcasters have ample opportunity to show and to mention the backmarkers without hindering a race broadcast. Nascar teams have sufficient difficulty attracting sponsors, and it seems that broadcasters are unnecessarily foiling a team’s opportunity to attract sponsors.