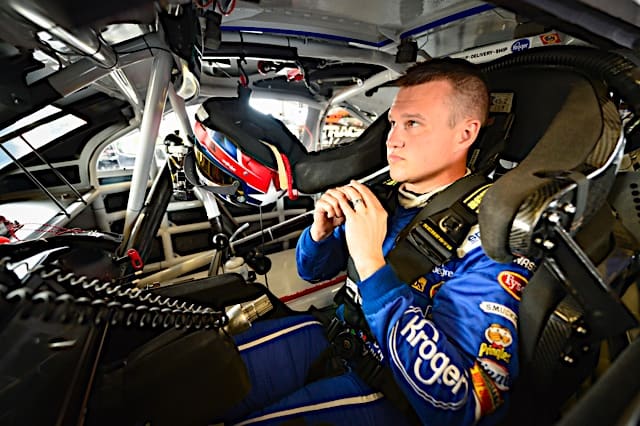 The Monster Energy NASCAR Cup Series Rookie of the Year battle will be intense this year, probably more than Daniel Hemric anticipated.

It will be much better than the clash between mid-packers William Byron and Darrell Wallace Jr. from last year. Instead, it might feature drivers competing for the playoffs, rather than barely staying on the lead lap.

That’s because Ryan Preece, the freshman out of JTG Daugherty Racing, is determined to do what he does best by playing the role of underdog.

Preece’s story is well known, going from modified racing to mid-tier NASCAR teams before landing at Joe Gibbs Racing in 2017.

Ever since, the Connecticut native has been one of the most astonishing racers in NASCAR. And for those who have seen him race, it’s no surprise. He works on his own cars, competes in a methodical way and races like his life depends on it.

Because, well, it does.

Preece understands that his full-time Cup ride can be taken away at anytime. So when he finished eighth in the Daytona 500, it was quite the confidence boost, showing JTG hasn’t lost a step, even after getting rid of veteran AJ Allmendinger.

However, at Daytona, JTG was expected to be strong with Preece and teammate Chris Buescher; the organization has a great history at plate tracks. Which is why the season’s second event at Atlanta Motor Speedway can be considered a success for the rookie.

Preece started a modest 25th at Atlanta, a tad worse than Allmendinger’s 21st from a year ago. But it was Preece’s performance in the race itself that truly raised eyebrows.

The No. 47 was competing inside of the top 10 late in the going. Preece did what he does best by methodically improving his racecar, staying on the lead lap and putting himself in contention for a strong run.

For quite some time, he was even running side-by-side in the top 10 with Hemric, who struggled in the first half of the race, mired outside of the top 20 for a chunk of the race until finally making his way toward the front late in the going.

Of course, it was all for naught. Preece’s day came to a miserable end by hitting BJ McLeod on pit road with 53 laps left, relegating him to 35th.

Nonetheless, his first intermediate track event with JTG can be considered a success. He put a mid-pack team in the top 10 in his second race with the organization. Sure, he came home with a destroyed racecar. But on the bright side, he was contending for a strong finish in just his second race.

With the new aero package coming into full effect at Las Vegas Motor Speedway, Preece can pounce. He can show that JTG’s alliance with Hendrick Motorsports is paying off.

Moreover, he can continue to show he is worthy of this opportunity. He can take advantage of NASCAR’s equalizing aero package by continuing to set a top-10 pace at Las Vegas.

And should he continue to show solid speed, Preece will have a chance to best Hemric and Front Row Motorsports’ Matt Tifft for the Rookie of the Year honors.

Hemric’s lack of speed and track position in the first half of Atlanta, coupled with similar results for Richard Childress Racing teammate Austin Dillon, shows that RCR is behind to start the year.

Preece can take advantage of that. He simply needs to continue to find speed and must avoid mistakes like he made at Atlanta. Because while Hemric and Co. may be a little behind now, there’s no guarantee that’ll still be the case in the coming weeks.

That said, remember this: unlike Hemric, Preece has won NASCAR races already. He has two Xfinity Series triumphs, a Whelen Modified Tour title and 22 victories in that division. He’s a proven winner, knows the taste of victory.

Remember, too, that Preece entered JTG at the perfect time. Buescher is set for a breakout year, showing just as much speed as Preece at Atlanta. Now, the duo knows their cars have speed.

Preece can use his experience in the modified ranks to execute, just like he did at Daytona, dodging wrecks left and right thanks to the close calls he’s had in the past. If the team did indeed make the right changes this year and can keep up this pace, expect the Rookie of the Year battle to come down to the wire.

Hemric might have been the favorite for the honor due to driving for RCR, but Preece might have more of a say in the result here than you might think.