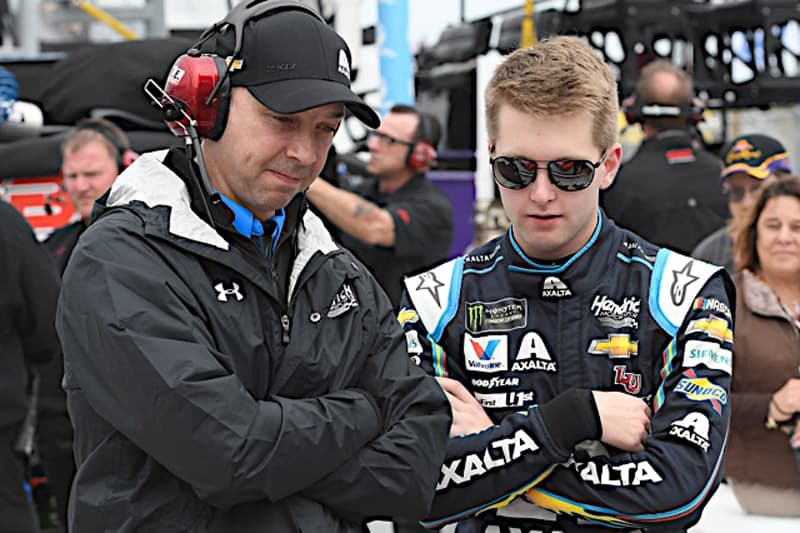 Hendrick Motorsports didn’t have a car finish in the top 10 at Atlanta Motor Speedway for the first time since 2010. Is HMS simply making gradual improvement, or is the team getting worse?

Mark Kristl: Hendrick has been gradually improving. If this package provides better racing, the team will further improve. Jimmie Johnson showed obvious frustration. Chase Elliott raced near the top 10 at times. Keep in mind William Byron is in his second Monster Energy NASCAR Cup Series season, and 25-year-old Alex Bowman is the second=-oldest driver on the team. It will improve by season’s end.

Bryan Gable: It’s fair to say Hendrick has declined from where the team was around five years ago when Johnson, Jeff Gordon and Dale Earnhardt Jr. won four races each.  But of course, Gordon and Earnhardt retired from full-time competition, as did Kasey Kahne.  Hendrick’s current lineup is geared toward future success, with Johnson continuing to provide veteran leadership.  The 2018 season was definitely a rough one for the organization, but that had a lot to do with the new Camaro body, as well as Bowman and Byron getting accustomed to their new roles.  The team is still in a rebuilding period, but one bad race doesn’t mean that Hendrick is not making progress. It will be up to speed in due time.

Amy Henderson: It’s gradual. Johnson was reporting his engine was sputtering on the frontstretch Sunday; if he wasn’t getting full power, that could explain a lot. Bowman and Byron are very much still works in progress; remember it took Gordon two full years in good cars before he was ready to win. That leaves Elliott as the concern Sunday, and he was the best Hendrick driver last year, so while it’s obvious HMS has lost ground in the last couple of years, Atlanta alone isn’t necessarily alarming. The team was fast in the Vegas test, so this week may paint a better picture.

Mike Neff: I don’t know that it’s getting worse but it isn’t getting any better. We are two races into the season and one race into the new aero package, so let’s not lose our minds. That said, this organization has been the flagship of the sport for most of its existence. This is a third year now of it running like dookie. HMS needs to pick it up soon, else it’s going to be facing another year with no title contender.

Cup rookie contender Daniel Hemric has faced criticism about being promoted to Cup without a Gander Outdoor Truck or Xfinity series win. Does success in a lower division matter for drivers to advance to Cup?

Neff: This just in, Johnson won one Xfinity race before he went full-time in Cup. He has had a pretty OK career. Daniel Hemric seems to be adapting to Cup just fine.

Henderson: Not necessarily.  Look at some of the drivers who have been successful in lower series who haven’t been as strong in Cup. Chris Buescher is a champion.  So is Byron. So are Daniel Suarez, Ricky Stenhouse Jr., Austin Dillon, Erik Jones. None of them have (so far) been an instant Cup contender.  Johnson has exactly one Xfinity win, and while his career in that series was with a mid-tier team, he was much more at home in a heavier, more powerful car.  It really boils down to the type of cars a driver is comfortable with, the level of equipment for the series they’re running (Roush Fenway Racing had a stronger Xfinity program than Cup program when Buescher won his title, for example), how competitive the rest of the field is in any given year. So while a nice NXS or Truck resume is certainly great, it’s not necessarily an indicator of what’s to come.

Kristl: Success in a lower division matters for drivers to advance to Cup to an extent. Johnny Sauter has Truck Series success, but his days of regularly competing in the Xfinity and Cup series are behind him. Yet Landon Cassill has never won in NASCAR and he has a full-time Cup ride. Part of a driver’s advancement to the Cup Series depends on what the teams seeks in a driver. StarCom Racing wants a driver who won’t tear up equipment whereas top tier teams like Joe Gibbs Racing expect success up the NASCAR ladder will translate into success in the Cup Series.

Gable: It never hurts to have experience winning races and championships, but lower division success is never a guarantee of a bright future in the Cup Series.  Plenty of drivers who lit up the Xfinity and Truck series never worked out at NASCAR’s highest level for a variety of reasons.  Conversely, who would have thought Johnson and Tony Stewart would have become stock car racing legends based on their results in the second-tier division?  Success in the Cup Series depends much more on how well a driver fits with their particular team.  Hemric showed potential at Atlanta, but there’s a long way to go in his rookie season.

Should NASCAR install some form of regulator on the cars to make them all able to travel the same top speed on pit road?

Gable: I’m not a fan of pit road speed regulators.  There is something about them which feels very un-stock car-like.  Leaving pit road speed in the hands of the drivers is part of the competition.  Yes, safety is important, but regulators would not eliminate mistakes like we saw on Sunday.  Pit road is always going to be close quarters.  I like that drivers and teams have freedom on pit road, whether that means the freedom to gain advantages or to make mistakes.

Henderson: Absolutely not.  It’s all part of the game, and mistakes should be costly. Ryan Preece wasn’t alone in fault on Sunday; BJ McLeod looked like he was lost on pit road and practically stopped in traffic. Rookie mistakes on both their parts. It’s not up to NASCAR to make sure drivers are paying attention and keeping the tachometer in the green.

Neff: Oh, stop, this is stock car racing. You are responsible for the speed of your car, not some rev limiter or throttle stop. We don’t need to become Formula 1 yet.

Kristl: No. Denny Hamlin tries to gain positions on pit road by maximizing speed in certain areas on pit road. If he fails, he incurs a pit road speeding penalty. A successful pit stop makes a difference in races, just ask Kyle Larson. If NASCAR changes that, it takes away a part of the racing. The Preece incident was a lack of communication between Preece, his crew chief and his spotter to ensure he safely navigated pit road.

With his win on Saturday, Kyle Busch became the winningest driver in truck history. Does that make him the best ever in that series?

Gable: Kyle Busch is not the best Truck Series driver.  I still give that title to Ron Hornaday Jr. because of his championships and dominance against different competitors.  Remember that Hornaday initially had a run of success in the Truck Series during the 1990s, winning two titles.  After trying his hand at other divisions, Hornaday came back to the Trucks in 2005 and picked up right where he left off, winning two more championships and maintaining his status as a consistent winner.  He is the first kind of driver that I associate with the Truck Series — a veteran who dedicated his career to the division.  While Busch has made a good investment in the Truck Series by providing quality rides for young drivers, the best Truck driver should be someone who was first and foremost successful in that particular division.

Neff: Hornaday, Mike Skinner and Jack Sprague carried the banner as best in the series for a while, but let’s get real: Busch won as many races as Hornaday, the all-time leader before Busch snatched it away, in less than half as many races. When he’s done, depending on what he chooses to do late in his career, Busch could seriously have 100 wins in Trucks and Xfinity. He’s the best in both of those series, hands down.

Henderson: No. The best driver in a series is how you talks about a driver who made that series his home, not one who dabbles from time to time. Also consider that Hornaday didn’t always have the best or most funded truck in the race, and he won anyway.  Busch always has had the best of the best; he SHOULD be winning all those races, because he has the most money, the best truck, the best crew and more experience than most of the field every single race. He will deservedly go down as one of the top Cup drivers in history, but the Truck and Xfinity wins should be, at best, an afterthought.

I’m pretty sure I know what Humble Kyle’s answer is!

Come on, he’s a legend in his own mind.

There’s a lot of that going around now!

“Does success in a lower division matter for drivers to advance to Cup?”

Prior success helps to obtain sponsors and helps to get noticed by owners/deciders.

But, success in cup is predicated essentially on talent while driving in cup, and is not predicated on prior success.

Trying to predict success in cup is a crapshoot; at best, it is a kinda sorta possibly maybe an educated guess.
As occurs in a lot of other fields, one will not know how a driver will do in cup until that driver is in cup, and even then, there might be a gestation period measured in years before cup success, or non-success, is apparent.

I don’t think that titles are everything, as I’ve always preferred to see each race as its own event and then think about points later. If I had to choose between my driver winning a lot of races or winning a title, I’d pick race wins every time. However, Kyle Busch has had the best in Cup level funding and engineering for each and every one of the ‘half as many” races he competed in, too, in decimated fields with few veteran teams or drivers. Johnny Sauter is the closest thing the series has had to a Hornaday, Dennis Setzer, Jack Sprague or Ted Musgrave for many years. DEI’s Truck Series budget for the 1996 title season probably wouldn’t field one of KBM’s trucks for five races today. I’d expect a veteran writer like Neff to be able to compare eras and make a distinction. But then, if we don’t promote Busch as the greatest in the history of forever, there’s one less “storyline” to lean on for hype when the few remaining fans are falling asleep/away.