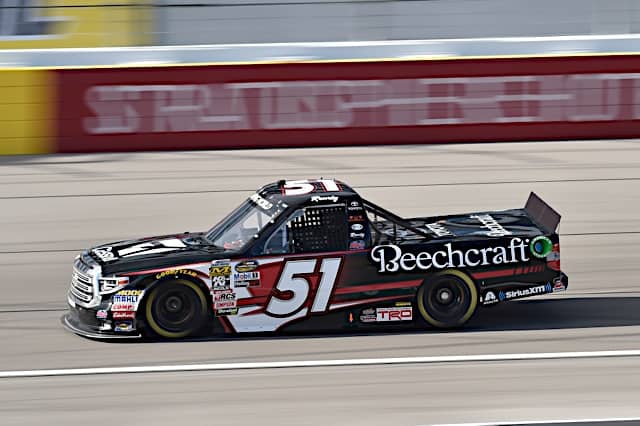 All right, we can quit wringing hands over whether or not Kyle Busch will top Ron Hornaday Jr.’s NASCAR Gander Outdoors Truck Series win count. It’s done. He did it.

After last weekend’s race at Atlanta Motor Speedway, Busch moves into sole possession of the most wins in Truck Series history, dating back the circuit’s 1995 formation. We didn’t have to wait too long; he scored his 51st win at Pocono Raceway last July, and Atlanta so happened to be his first start in the series since that race.

So there weren’t these storylines akin to, I dunno, when Chase Elliott went all those races before finally getting his first Monster Energy NASCAR Cup Series win last year. He showed up, he won again. That’s that.

And maybe that’s part of what makes Busch’s feat special — or at least impressive. It showcases the abject dominance he has on the rest of the field, that he can step into a truck for the first time in well over half a year and still emerge victorious right off the bat. Yes, he’s a decade-plus-long Cup regular, but not just anyone can accomplish that feat.

Regardless of your opinion of how he snagged most of those victories (see: with some of the best equipment in the series and while he was running full time in upper series), the fact remains: with 52 wins, Busch is now the all-time leader in wins in the series.

With the latest change in seniority, let’s run down the top 10 in wins in series history — while also showing off the winning percentages of each entering this weekend’s (March 1) event at Las Vegas Motor Speedway.