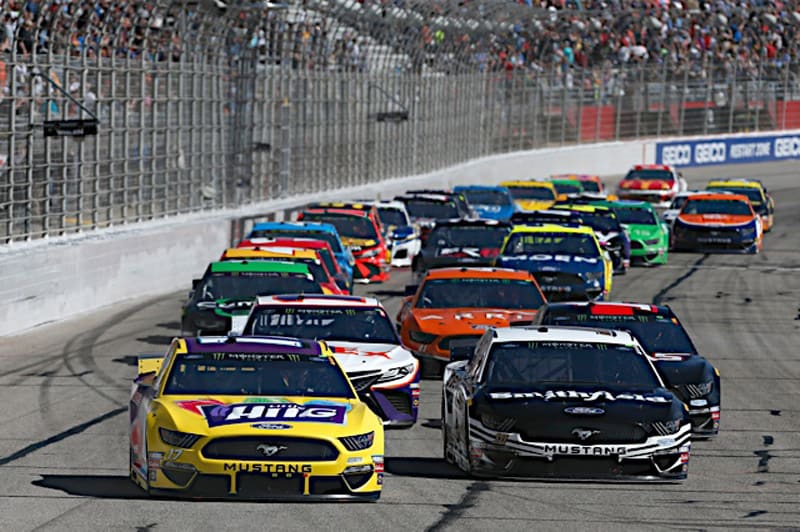 Jon Bon Jovi and Jennifer Nettles were wrong — sometimes you can come home!

Mister Peabody and his boy Sherman will take you on a magical journey in their way-back machine to the year 2000, when NASCAR wise guy writers Butch Bellah, Ren Jonsin and Dennis Michelsen launched Frontstretch. The site has grown a lot since those days, and it is with great pride that I announce today that, thanks to editor-in-chief Tom Bowles, I have indeed come home. Each week I will share my news, views and occasional nonsense from around the world of NASCAR.

Sometimes I believe that a certain percentage of NASCAR fans only tune into a race so they can complain about it before, during and after the race. They complain that drivers have become too vanilla, and then when someone like Kyle Larson says something provocative like implying that Hendrick Motorsports is good at cheating, NASCAR fans get out the torches and pitchforks!

This year NASCAR is making yet another major change to the rule package in the Monster Energy NASCAR Cup Series, because let’s face, it the racing the last couple years at intermediate tracks got so bad that Charlotte Motor Speedway felt it had to try a ROVAL race instead.

Speaking of complaining: after fans threatened before the race to lay down in front of the equipment if Atlanta Motor Speedway ever tries to repave its track, after the event some of those same people were screaming for a repave!

The new package gave us an entertaining-yet-not-thrilling race, but it was a step in the right direction nonetheless. I know this is a novel concept, but maybe, just maybe, we can hold off on calling this new package a success or failure until a few more races play out.

I know, crazy, but NASCAR fans, can you give it a chance for once? Please? For me? Thank you!

In today’s NASCAR, gone are the days of one major sponsor covering each of the cars for 36 weekends per year. Sometimes the smaller sponsors get lost in the shuffle on television, but without those companies big and small, our NASCAR fields would shrink — and so would our enjoyment of the sport.

Each week I will profile one of the newer brands that has jumped along for the ride in NASCAR.

Tunity is an app that allows you to listen to muted television at home if your significant other is sleeping or at a restaurant or bar. Did you know that 2.5 million people tuned into the Daytona 500 away from their homes? Tunity has solid data that says that is the case.

Let’s find out more about Tunity and its sponsorship of the No. 36 of Cup Series rookie contender Matt Tifft from the founder, Yaniv Davidson.

Handicapping NASCAR races when there is a huge change in Cup rules is tough. But what we learned at Atlanta are that the guys who like racing Atlanta ended up doing well despite the huge change in rules, and the guys that struggle at Atlanta struggled. The only exceptions to those trends were the poor performances by Jimmie Johnson and Chase Elliott.

The other interesting trend was the strength of several of the smaller teams. JTG Daugherty Racing had strong performances for both of its drivers until bad luck took out Ryan Preece.

We also saw that track position is going to be huge. Kyle Larson had one of the fastest cars when he was out front but struggled to make passes when penalized and sent to the back.

None of the brands seem to have a huge advantage with this new package, with a Ford winning, a Toyota second and a Chevrolet dominating a huge chunk of the race.

Six drivers spent 90 percent of the laps in the top 15, which also shows how important track position was at Atlanta.

Been thinking about that potential Atlanta repave. I wonder how concrete would work out at Atlanta?? Last I knew concrete can be pretty abrasive too.. Plus I did see some pretty big chunks fly around.