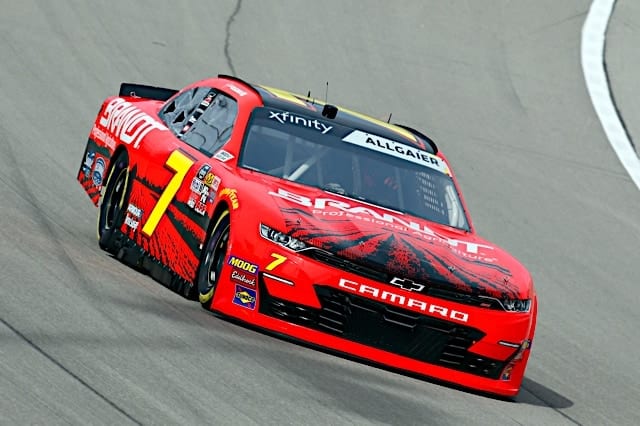 Justin Allgaier was quickest in the opening session with a speed of 178.737 mph. Monster Energy NASCAR Cup Series star Kyle Busch was second, followed by Tyler Reddick. Both ran the same exact lap speed at 178.642 mph.

Justin Haley and Cole Custer would round out the top five in the session.  Brandon Brown, who is coming off a career best 13th-place finish at Atlanta Motor Speedway, ran the most laps with 33, ending the session in 23rd while last week’s winner Christopher Bell ran the seventh fastest time.

Haley ran the fastest lap of the day between the two sessions, coming in final practice, with a lap speed of 180.307 mph. The No. 11 team is coming off a solid eighth-place run last weekend at Atlanta and will look to better that performance in tomorrow’s 300-mile event.

His teammate for the weekend, Austin Dillon, finished second in final practice, making it a 1-2 Kaulig Racing practice session.

Busch was third on the board with Joe Gibbs Racing teammate Bell in fourth. Reddick rounded out the top five.

Busch had an issue early in the session after scraping the wall, but it would not be enough to hinder his practice time or his car.  Reddick struggled with radio issues as well throughout the session, but according to the reigning champion, the issue has improved.  Daytona winner Michael Annett ran the most laps with 47 and finished the session 14th quickest.

Cars will hit the track next for qualifying tomorrow at 12:40 p.m. ET with coverage on Fox Sports 1.