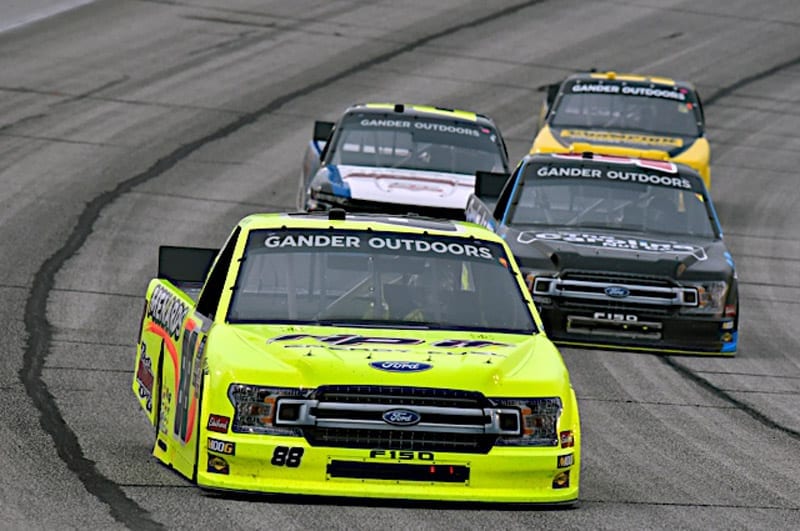 It had been MIA since last July at Kentucky Speedway, the last time the Tulare, California native and Gander Outdoors Truck Series veteran earned a top three finish. But after 200 miles at Las Vegas Motor Speedway, the neon yellow ThorSport No. 88 was in the picture at the end.

“You guys always focus on the negatives,” he said with a laugh. “We hadn’t run top three in quite awhile. Junior (Joiner, crew chief) and I in late May, early June, went on a deal just trying a bunch of stuff, trying to figure stuff out. And we struggled bad. We were as (bad) as the No. 88 had ever been, I felt. We rebounded and felt like we were pretty good at Atlanta, knew where we were off.”

“We talked Sunday and said ‘we’ll have it a lot better here in Las Vegas.’ Then we got tore up on lap five, six, seven, I still can’t believe the speed this thing had with the left rear quarter panel torn up as much as it was. All in all, it felt like the No. 88 of old without a doubt.”

Crafton’s evening went downhill fast. He sustained damage on Lap 7 when Sheldon Creed got loose and spun off Turn 4.

.@Matt_Crafton is among those who also collected damage in this accident. #Strat200 pic.twitter.com/Jq5sXSgWow

“I couldn’t see,” he said of the incident. “When the No. 2 got turned sideways, he stayed in the gas. I figured he was going to go down for a second and then come back up the track. So I aimed about at his door and turned right at the last second. About that time, the No. 04 (Cory Roper) never checked up and drove straight through us.”

Starting the season off with a fifth-place finish at Daytona, 14th last weekend at Atlanta and now a third in Sin City, the two-time series champion is feeling confident looking at the road ahead.

“This felt good for all the guys,” he said. “As bad as we’ve been from June on. There were some ups and downs, we saw some highlights last year, thought we were going the right direction with some setup stuff and then in the fall we just missed it. We know the direction we needed to go over the winter, we kept working on it and I said ‘without a doubt it’s the No. 88 of old, let’s go win some races now.’

The next Gander Outdoors Truck Series event will take place at Martinsville Speedway on Saturday, March 23.