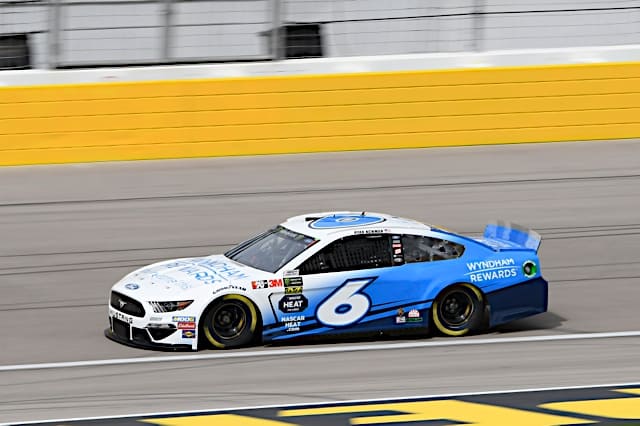 I deliberately didn’t write this article on Friday because I, like most of the drivers, media, and fans in the infield at Las Vegas on Friday, needed time to digest what we saw in the first “full package” Cup qualifying session.

I was hoping that watching the Xfinity Series qualify on Saturday morning would give me perspective, a reset if you will. Mother Nature had other plans, washing out both second Cup practice and Xfinity Series qualifying. But the time spent in the media center watching my beloved Demon Deacons as the Air Titans did their work allowed for plenty of reflection on what Cup Series time trials have become. And it’s about as ugly as Wake’s 25 point loss was.

For the second straight week, the final round of Cup Series qualifying started with a banzai charge off pit road that resembled an interstate merge zone during rush hour. Some cars stopped in the middle of the pit road, staging and waiting, while others literally raced each other off, though fortunately there were no close shaves with the wall a la Austin Dillon vs. Clint Bowyer last week in Atlanta.

The pit road @LVMotorSpeedway looks like traffic on the strip pic.twitter.com/oV75pM4whZ

For some, that was all she wrote for qualifying. As discussed last night, William Byron and his No. 24 team took one look at where they exited pit road into the draft and chalked up the qualifying session as a lost cause before reaching turn 3 on their up-to-speed lap. For others, the combination of this new package, plus the group format itself, was a last straw of sorts for qualifying for Cup races.

“That’s not how qualifying is supposed to be.”

Newman’s frustration is hardly surprising; after winning 34 poles in the first four seasons of his Cup career, he has won only 16 in the 14 years since. And while the (former?) Rocketman is about as outspoken a critic of this format as they come (Newman quipped that it’s all made for TV as he was leaving the media bullpen Friday night), his criticisms are not without merit.

As I wrote last week, the running with the bulls mayhem that is becoming pit road exit during these qualifying sessions is completely contrary to the culture of pit road safety that NASCAR has for years been preaching. And while that risk is admittedly minimized seeing as the crews have no reason to be over the wall during qualifying sessions, the risk that this format poses to the race cars themselves can’t be understated. Numerous drivers leaving pit road after the second round Friday night made a point to say they were thankful no race cars were torn up during the sessions. Given that the Cup Series can’t fill a field as is, putting additional risk into qualifying sessions doesn’t seem a pragmatic approach, especially when the odds are already stacked to the nine against non-Charter teams; they can’t qualifying for 90% of the starting spots in the field.

Newman is also correct in identifying the level of manipulation that is going to drafting on the intermediate ovals. Throughout practice on Friday, there was nearly as much radio traffic circulating about packs and planning as there was setup. And it seems there are organizations out there already earning a reputation. Twitter was ablaze when the Penske Fords sync’d up in the final few minutes of practice to make a drafting run. And in attempting to form up a pack to draft with, said Ryan Preece’s spotter, “we can always do what the Gibbs guys do and just stop” [if the pack isn’t desirable].

As of right now, it’s more just a radical departure from the past and adding a sense of lottery to time trials. That’s what happens when every field minus the Daytona 500 isn’t full. There are no real consequences to qualifying anymore. But should the day (hopefully) come again when cars go home every weekend, there’s reason to be concerned about race qualification being subject to a process this open to manipulation and even obstruction.

None of this has happened, yet. But if there’s one certainty to this new rules package, our own Matt McLaughlin captured it weeks ago, stating “NASCAR would like it very much if you and I didn’t call the tapered spacer a restrictor plate.”

But “a plate and a tapered spacer do the same job. They limit the amount of fuel-air fog that can be burned by the engine to make power. I didn’t like plates and I don’t like tapered spacers. As far as I’m concerned they’re the same thing.”

Look at the RPM bands from Cup practice Saturday. Running wide-open the length of the Las Vegas Motor Speedway, Brad Keselowski’s RPM band varied from roughly 7,900 to 8,300. Anyone standing in the pits can hear the same thing as well, the engines are running at a steady rhythm. Just like the plate cars did.

And just like plate cars, drafts are needed to make them go their fastest. So rewind back just a few weeks to Daytona, and remember how it played out. The Mustangs stuck together, so effectively so that Joe Gibbs Racing Toyotas and Hendrick Motorsports Chevrolets allegedly struck their own deal to play nicely. Joey Logano celebrated a top 5 finish in the Daytona 500 by immediately going to a lower-tier Ford team to complain about the lack of help coming to the checkers. And practice spoke for itself all Speedweeks long, with the manufacturer camps all playing to the tune of their own drums.

Take one look at what plate racing evolved into before its “death” at Daytona, and it’s easy to see this as the future of NASCAR’s new package. Which makes qualifying extremely vulnerable to said manipulation.

And while one could chalk up Newman’s bitterness about group qualifying to his diminished qualifying prowess over the last decade, the single car qualifying that he pines for a return to is really NASCAR’s only viable option for a truly representative and competitive qualification system…because heat racing has proven completely unworkable in modern NASCAR.

Remember when the Xfinity Series ran heat races in select events in 2016? If you don’t, you’re forgiven, because they sucked the life out of the races they were run in. All splitting the field in two did was to see the field string out even more, with fewer cars to fill the track.

The same inefficacy of applying heat races to this form of stock car racing was on display Thursday night at the dirt track in Las Vegas, where the K&N West Series ran two heat races prior to the 100-lap feature. While the feature event proved a thriller in the closing laps, the heats were both complete duds, with little passing and again, no consequences, as all 19 cars that ran the heats made the field.

More than anything, Newman is correct on principal, that qualifying should be dictated by a driver and his race car, rather than where they can line up on pit road, the friends they can cut deals with or the group they happen to be in.

I vividly remember the first time I ever watched a group qualifying session in person. It was last season for the ARCA race at Talladega. The very first group to qualify that day went three-wide early, with the front cars moving to hang out what they perceived as slower cars after the up-to-speed lap. The complete disorganization resulted in all five of the cars in that first group qualifying outside the top five, while the top four starters all emerged from the fourth of five groups to qualify…because having watched what happened, they organized together and ran together.

It made the competitive side of me sick to my stomach.

And 24 hours after watching the first Cup qualifying session of the new package era, I can say upon reflection that I feel that sick again. If what’s old (restrictor plates) is new again (tapered spacers), let’s make single car, single run qualifying a thing again.

I won’t be watching qualifying if something doesn’t change. That was stupid. Everyone waiting to see who blinks first. Stupid. They are going to have to do the same thing with qualifying that they do at the RP tracks. Single car qualifying.
I think we will know a lot more about how the tapered restrictor plate spacers will work after this weekend. I can’t say what I’ve seen so far gives me much hope.

I saw half of it and I was like WTF, and a little angry thinking NASCAR is pulling this crap again. I saw Ryan Blaney’s post race interview. You could tell he wanted to speak and was pissed ( AND NOT WRONG), but the trip to the “HAULER” maybe scared him more. NASCAR come on, fans see it, drivers see it. And for someone to look at quals and say WTF. YOU HAVE A PROBLEM!!!!!!!!

Let it continue. I’m gonna wait until someone takes out a few cars on pit road and laugh. If Dillon had come down just a little but more Bowyer would have totaled them both out. Friday Stenhouse was switching lanes so fast on pit road, searching for an open lane it’s easy to predict he will eventually wipe out a bunch of cars. I can’t wait for it to happen. Headlines, Nascar wipes out half the field on pit road during qualifying.

Group qualifying is just another reason fans don’t watch Nascar anymore. Qualifying is supposed to be the fastest car. Not the car that makes a deal with others. I don’t watch qualifying anymore because its not real. Just another gimmick created by Brain France. People can not understand why Nascar is not as popular as it was before. Two words: Brian France. He took Nascar from a great sport and tried to make it into the WWF.
Bring back the old Nascar and the fans will return.

Who catches the best draft is not what qualifying should be about. Manufacturers teaming up to ‘fix’ quals is also NOT what should be happening. But, I guess that if Nascar is willing to sacrifice any validity to their ‘sports entertainment’, then they are dancing in the office. With this, the ‘lucky dog’, and the ridiculous playoff gimmick, I find that I no longer make sure I’m home to watch a race.

I assume there is no need to change qualifying at Phoenix, as the Phoenix package will be the fourth different package used in four races (Phoenix will use a larger opening spacer than used at Atlanta or Vegas, and will have the front-brake-cooling [and coverable] air ducts used at Atlanta, and not the front air [drag inducing, and non-coverable] ducts used at Vegas).
Nascar, if they should address qualifying changes, would probably do so at some point before the teams qualify at Fontana – Fontana will use the Vegas package.
Enjoy your last Sunday before the switch to Daylight time.

Gee! NA$CAR made changes and it turned into a joke. Who woulda thunk it? Looks like they don’t need Brian’s brilliant ideas. Unless it was and they went through with it.

Different really gets people wound up. A little too soon to declare it a total dud. They might have been better advised to leave qualifying alone until they know how these new packages were going to race. Good to see people actually care though, for a while I was pretty sure no one was even watching!