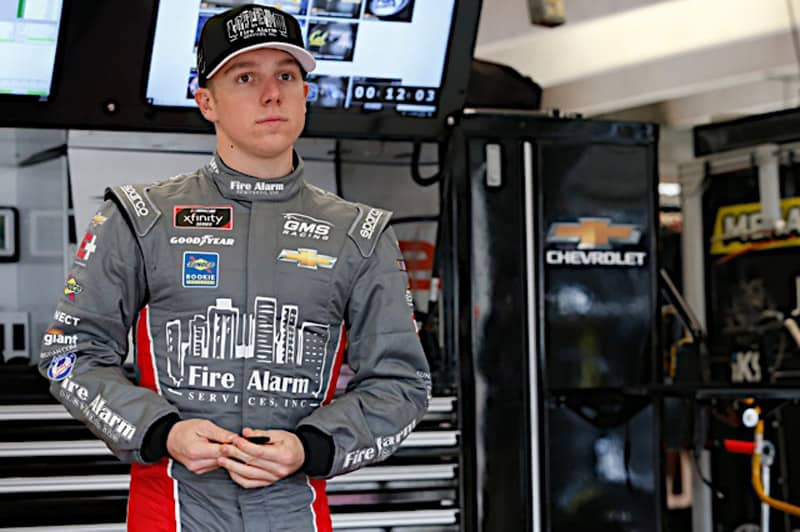 John Hunter Nemechek was the only driver not from Las Vegas to finish on the proverbial podium in Saturday’s Boyd Gaming 300, but with Allegiant Airlines on the No. 23, this was a hometown race for his team. That changed nothing for the youngster, who posted a runner-up finish in just his third race with the GMS Racing organization.

“I wouldn’t say there’s any more pressure” being in his sponsor’s backyard said Nemechek post-race. “I think I put enough pressure on myself from last weekend after Atlanta. We didn’t run that well, and we needed a good finish.”

Capitalizing on a chaotic final 20 laps at Las Vegas, Nemechek delivered that finish. Avoiding the carnage that collected contenders Brandon Jones, Christopher Bell and Austin Cindric, it was Nemechek that lined up alongside Kyle Busch at the start of the second overtime. And though Nemechek was not able to deny the Cup megastar a win this Saturday, it wasn’t for lack of effort.

Nemechek more importantly avoided the fate of Tyler Reddick, who during the first overtime also ran side-by-side with Busch for the lead, only to spin out and trigger a crash. Scoring a second place finish, and the points that come with it, allowed Nemechek to move from 12th to sixth in the standings. And after a Friday night race that saw the organization’s new Truck Series slugger Brett Moffitt expressing nothing but disappointment for the team’s struggles on pit road, Nemechek’s result should provide such much needed optimism.

“From where we started in practice if you had told me we would have finished second I would have called you crazy” said Nemechek. “Huge shoutout to the whole GMS organization…for putting in all the work…but more or less not giving up. We worked from the time that we unloaded to the time the race ended.”

“We’re going to continue to build momentum from this and move forward.”