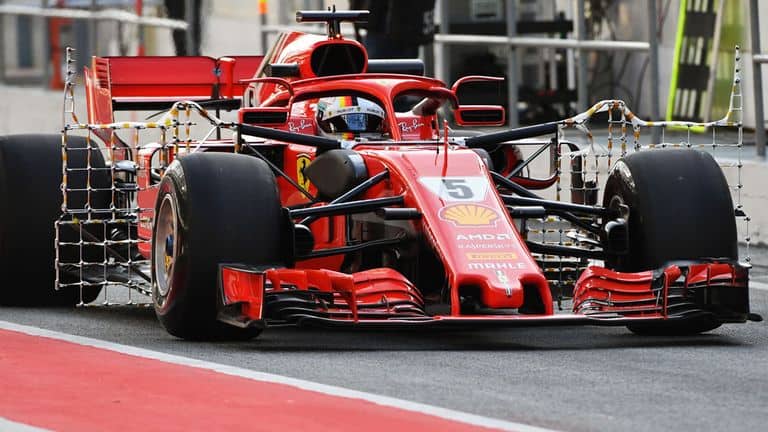 Another Formula 1 testing season has come and gone and on one hand, we got to see the cars on track, meaning we got to see the updates in the aerodynamic bodyparts as it pertains to the new regulations affecting the front and rear wings, and we also got to see some faces in new cars. On the other hand, all of the lap times that we saw kind of mean nothing and we don’t really know much about where the teams stand going into Australia on March 17th. So while we don’t really know team performance, there were three points that my head keeps focusing on when trying to understand what to expect for the upcoming season.

Yes, they were this fast last year and still lost, however, this is the first time that we saw Ferrari and Mercedes go in opposite directions in terms of car set up. The Ferrari teams (Scuderia, Alfa Romeo, and Haas) all showed up to testing with a front wing that bows a bit more down toward the front wing endplate than the likes of the Mercedes teams. This element could be a big development for the new season. Every time there is a major regulation change, we always see one team just figure it out with a car built maximizing the innovation. The two examples that stand out are Brawn with the double diffuser in 2009, and Mercedes with their engine of 2014. Ferrari are also coming off of a season where they had the best engine for a better part of the year and they have a new team boss of Mattia Binotto that doesn’t intimidate or breathe down the necks like his predecessors, and with the addition of a young Charles Leclerc looking to prove a point and Sebastian Vettel hoping to make up for what some considered a choke job in 2018, it seems as if Ferrari might be the team to beat for now int he championship.

McLaren also came to Barcelona with a similar front wing as Ferrari and both drivers worked their way up to setting the fastest lap time of the day during the final week. Yes, all lap times need to be taken with a grain of salt, and the days in which McLaren topped the timesheet also came with reliability issues; however if McLaren hit the nail on the head with the wing regulations, and Renault’s engine has improved as much as they boasted about during the off-season, there is reason to believe that McLaren will live up to my bold prediction of 2019. McLaren will be on the podium at least once at some point this season. Things have changed internally for McLaren this offseason, it’s the first winter without Eric Boullier and they have a completely new driver lineup in Carlos Sainz and Lando Norris to usher in a new era for the organization.

3. Renault Did Not Impress

After all of the talk of the massive improvements to the Renault facility that allowed the team to stretch their limits on development, they hung out around the midfield for most of the testing days. While it was made clear even before the 2018 season that Renault did not expect to win in 2019, with the driver lineup of star Daniel Ricciardo and Nico Hulkenberg, they should be looking to be the clear favorite to finish fourth in the standings this season. Again, testing times mean almost nothing, but at no point did Renault really wow anyone. We do not truly know where Renault is this season, but my gut and what I saw brings me to my next bold prediction of 2019: Renault will struggle and will be outperformed by their kinship car, McLaren. Something about the hype does not sit well with me, and Renault is coming off a season where they had the least reliable engine on the grid and haven’t shown the opposite in these two weeks. Nico Hulkenberg is facing massive amounts of pressure to live up to his early-career hype and match a race-winner in Ricciardo could lead to some friction internally, eyes will be on Renault and their development in 2019.

Other things of Note: I noticed is that Mercedes is continuing to sandbag the competition as they have since 2014. Focusing on long mileage runs in the first seven of eight days and only showing raw pace in the final day, no one really knows where Mercedes stands in relation to their top competition, Ferrari. However, there is a different tone in Lewis Hamilton’s voice when speaking the press about the championship competition in 2019. Lewis has gone on record saying that this will be the toughest fight yet with Ferrari. The tone of his voice is layered in confidence but maybe a little bit of anxiousness. While Mercedes finally went for fast laps on the final day of testing, Ferrari did as well and bested the Silver Arrows. You’d have to have rocks for brains if you think that Mercedes will not be in the championship hunt, but 2019 seems to be the biggest test for Mercedes’ hybrid era dominance.

Red Bull has had a confusing run of things in testing. They weren’t able to put as much mileage on the car as they’d like to have, and they haven’t flexed the Honda power that they have said has leaped Renault. Pierre Gasly had a few off-track excursions including his major crash on day three during the second week, leading to only 29 laps run by Max Verstappen on the final day thanks to engine unreliability. Like past seasons, off-season hype has led to a less than stellar pre-season test that would more than likely place Red Bull third in the pecking order yet again for 2019. Gasly has a lot to prove as he steps into the main Red Bull seat while also being matched up with young phenom, Verstappen as well as running an engine that was the laughing stock of the grind for the majority of their F1 return, Red Bull has a lot of ground to make up. Are they just sandbagging their engine’s pace like the Mercedes? Probably not, however testing lap times do not really matter so we will need to see how Red Bull performs come Australia.

Alfa Romeo also impressed with their increased budget, stronger power unit, innovative front wing, and experienced driving (half of it, anyway) all kept the revitalized team near the top of the timing charts in almost all of the sessions. Kimi Raikkonen seems to be feeling relaxed while out of the white-hot spotlight of racing for Ferrari, and that could lead to more passioned drives in the upcoming season. Antonio Giovanazzi is determined to not set as bad of a first example as he did when filling in for Pascal Wherlein for Sauber in 2017, and with a better car, he will have his opportunity to scrap with the best of the midfield. My third bold prediction is that Alfa Romeo Racing will finish fourth in the constructors standings in 2019. ARR is not Sauber anymore, nor are they a backmarker, they are a competitive midfield team now with their increased resources from Ferrari. With all of the factors I listed above, and if my prediction of Renault struggling comes to fruition, Alfa Romeo will be battling the likes of Racing Point, Haas, and maybe McLaren for the fourth spot, and maybe they fall to Racing Point if they pick up the pace from the pre-season test, but things are seriously trending upwards for the newly branded team.

Finally, Toro Rosso repeated their 2017 pre-season testing run. The team ran many laps and was near the top of the timesheets most of the sessions. However, if there were any example as to how much the lap times in testing do not matter, it would be Toro Rosso. Last season they replicated their pace in testing and were still a lower tier midfield team. Yes, they have the torpedo in Daniil Kvyat back, but he was outperformed by rookie Alexander Albon most of the test. I believe Albon will score higher than Kvyat this season and out-drive him in most races, but Toro Rosso will not be battling for fourth in the constructors, they will hang around seventh to tenth as they did last season.

Time will tell if any of my predictions come to fruition, and how much of an impact the new aero regulations will have on the racing. Haas’ Kevin Magnussen has gone on record saying that it is much easier to follow other cars now, which would be a massive improvement from last season. Coupled with the bigger DRS wing, there could be a chance that overtaking comes too easy when the lead car is out of DRS range and the following car has it. If the trail car becomes like a rocket ship, we could see changes coming into 2020 that may involve smaller wings again, or striking DRS as a whole, which the FIA has stated that they would like to do in the 2021 regulation change. The long offseason is almost over, the Formula One season is a couple of weeks away! There are so many questions coming into 2019, the car and driver lineup has been shaken up the most since the transition from 2013 to 2014, will the order shakeup as well? Can Ferrari win their first drivers championship since 2007? Will Lewis Hamilton pass Juan Manuel Fangio to win his sixth title? Get your popcorn ready people, the 2019 F1 season should be quite the treat.

preseason testing is always fascinating to observe for all the reasons noted. But until proven otherwise you have to believe that it will be Mercedes followed very, very closely by Ferrari with Red Bull pulling off a couple of wins. As for the mid field? who knows.
Ought to be interesting.