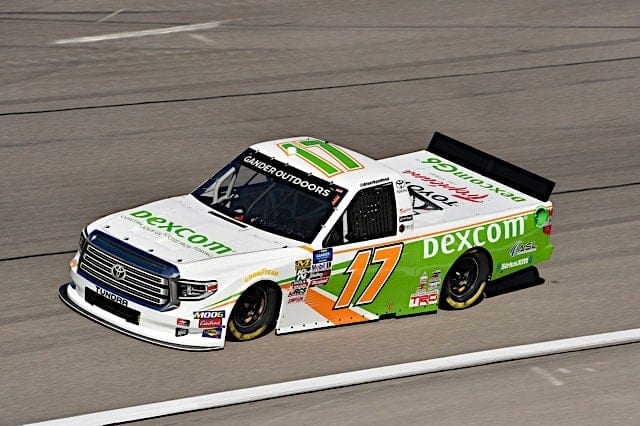 Given that DGR-Crosley’s 2019 season has started off with every wrong type of outcome imaginable, it seems counterintuitive that adding a third truck to the mix would improve the situation.

It did. And while Ryan Reed might not individually responsible for the turn in fortunes, the finishing order doesn’t lie…Friday night was by leaps and bounds the best night of 2019 for DGR’s Truck Series operation.

For Reed, rideless in 2019 after losing sponsor Lilly Diabetes (and Roush Fenway Racing shuttering it’s Xfinity program), the return to racing couldn’t have gone much better than it did, as the Californian scored a ninth place finish with a clean truck at race’s end.

“It was a top 10, so it’s hard to be upset with that,” said Reed after exiting his machine. “I kinda had to learn how to drive these [trucks] again, it’s so different, but the folks at DGR are building fast Toyota Tundras.”

For Reed, this race was a radical departure on a number of levels. For one, it marked a return to Truck racing for the first time since 2012 (also at Las Vegas). But it also marked a new type of environment for Reed to enter. Having spent the last few years with Roush Fenway, DGR-Crosley is a comparatively young organization. And this Friday, Reed was the senior driver in the stable. Using time at Daytona to meet with the organization, Reed spent the last week preparing for this event.

“I haven’t been in this situation in a long time,” said the driver. “Overall, it’s a young team. But they have fast equipment and really good people, they’ve got all the ingredients. And tonight, we honestly had a top-five truck. That should give them confidence, it gave me confidence, and hopefully, we’ll get to do some more of these, because I had a lot of fun with those guys.”

Despite radio issues for both the Nos. 15 and 54 trucks, the DGR operation also saw the best result of the season for its No. 54 truck. After a disastrous start to the 2019 season, Natalie Decker scored a career-best 13th place finish after reaching the second round of qualifying Friday afternoon with a truck that felt “the best it ever has”. Meanwhile, Anthony Alfredo finished what could only be considered a disappointing 18th after running as high up as eighth in the running order during the final stage (Alfredo was forced to pit from 12th on lap 129 with a vibration).